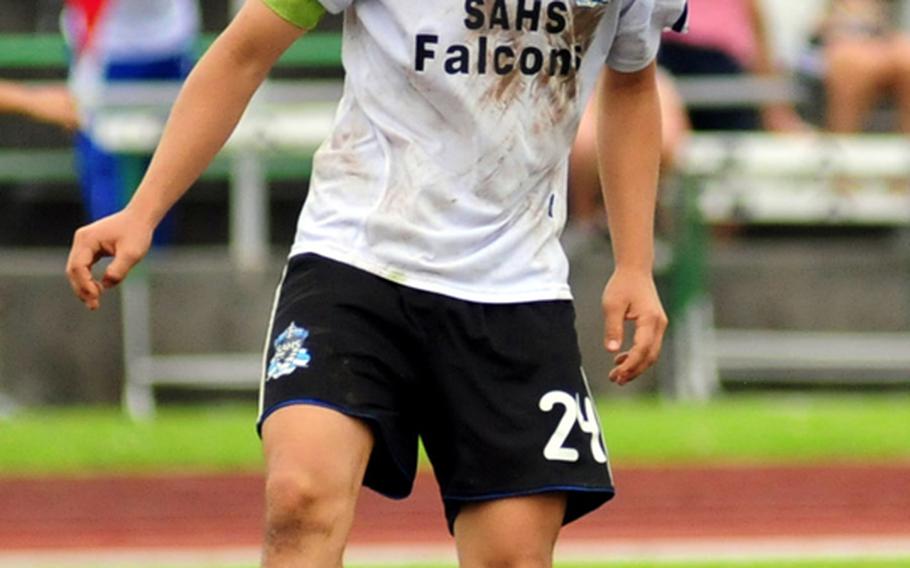 Given their pedestrian 5-5-4 regular-season record and fourth-place pool-play finish in the Far East Division I Tournament, not many gave Seoul American&rsquo;s boys soccer team much of a shot at winning the title.

Coach Steve Boyd knew better. That regular-season mark came during the toughest Korean-American Interscholastic Activities Conference Division I season on record, in which six teams each had a shot at the regular-season and tournament title.

And it prepared the Falcons for the most unlikely Far East D-I Tournament finish in school history.

&ldquo;As we learned to play with each other, building the chemistry of the team &hellip; it took a little longer given the strength of the league,&rdquo; Boyd said. &ldquo;But we kept getting better and better, we peaked at the right time and in the end, it showed.&rdquo;

It showed in a 1-0 double-overtime triumph over host Kubasaki in last month&rsquo;s Far East D-I Tournament final match, when the Falcons became the lowest pool-play seed in the tournament&rsquo;s history to win the title.

At the effort&rsquo;s center was Josh Chung, a junior whose play in both KAIAC and Far East were critical to his team&rsquo;s fortunes, Boyd said. For that, Chung has been accorded Stars and Stripes boys high school soccer Pacific Player of the Year honors.

&ldquo;Josh was one of the best players in KAIAC and Far East,&rdquo; Boyd said of Chung, who was also named Far East D-I Tournament Most Valuable Player. &ldquo;He was the engine. He was the only one on our team who could play all 11 positions. He&rsquo;s that skilled.&rdquo;

That fourth-place Far East pool-play finish could have just as easily been a first-place finish, Boyd said, given the conditions the first couple of days of the tournament in which rain fell incessantly, muddying the one field used the first three days.

&ldquo;When we got onto a dry field&rdquo; Friday for the semifinals and championship matches, &ldquo;we showed we still had it,&rdquo; Boyd said.

Chung tallied 12 goals and four assists for the Falcons, who went 8-2-1 in postseason play.

Chung is expected to attend a handful of soccer camps in the States and will be one of the Falcons&rsquo; returning stars in 2012.

&ldquo;He&rsquo;ll be even stronger and bigger next year,&rdquo; Boyd said.