Senkbeil puts aside past to win in present 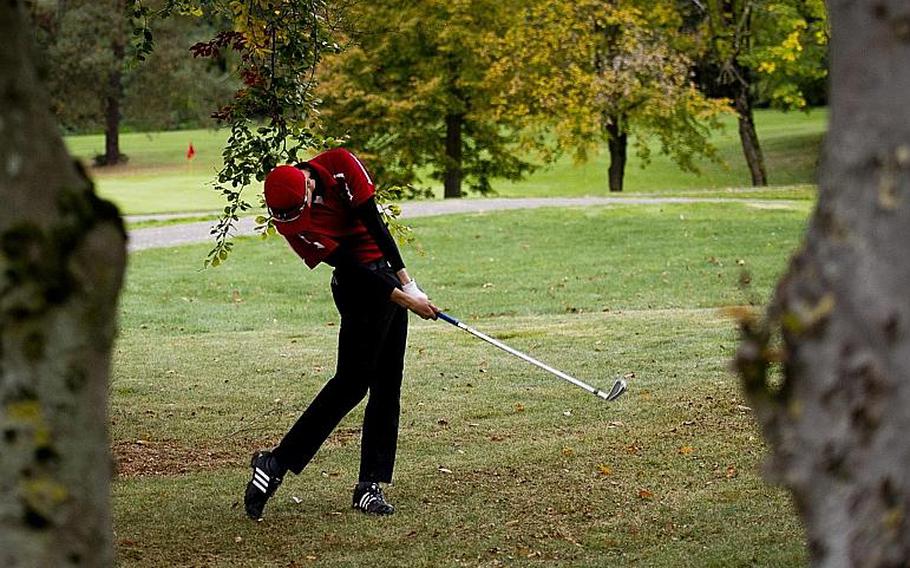 Kaiserslautern's Kaden Senkbeil hits the ball to the fairway during the DODEA-Europe golf championship at Rheinblick golf course in Wiesbaden, Germany, on Friday, Oct. 13, 2017. (Michael B. Keller/Stars and Stripes)

Kaden Senkbeil had to strike a difficult balance as he competed for the 2017 DODEA-Europe boys golf championship.

On one hand, the Kaiserslautern junior wanted to build on strong past performances and continue his career trajectory of steady improvement.

On the other, he had a regular season full of disappointing efforts that he didn’t want weighing him down.

Suffice it to say, he found the balance. Senkbeil became the European boys golf champion, as well as the 2017 Stars and Stripes boys golf Athlete of the Year.

“He just kind of brought it all together,” Kaiserslautern coach Chris Grogan said.

Senkbeil has been a steady presence in DODEA-Europe golf throughout high school. He ranked in the middle of the pack at the European finals as a freshman in 2015. As a sophomore, he leaped up the leaderboard for a fourth-place finish, but still well off the pace set by departing four-time champion Jordan Holifield of Stuttgart.

The window of opportunity flew wide open this fall as Senkbeil joined fellow rising stars Bryan Cortese of Wiesbaden and Jonathan Ciero of Ramstein on the short list of potential champions. But the scores Senkbeil produced, including a 34-point Stableford points showing and a double-digit loss to Ciero on Sept. 23, weren’t those of a champion in waiting.

Thus Senkbeil entered the Oct. 12 championship meet with a conflicting mission statement - to let go of the past while seizing a title that has been years in the making.

“After the regular season, I just let all those scores drop out of my head,” Senkbeil said. “I didn’t want to remember them.”

Instead, Senkbeil replaced them with better scores. He shot a solid 38 on day one to take a one-point lead over Ciero, and improved further on day two with a 42-point effort that was good for a six-point overall victory.

“I came into this saying, ‘It’s a new round of golf,’” Senkbeil said as he celebrated his championship. “Just play the game you know how to play.”