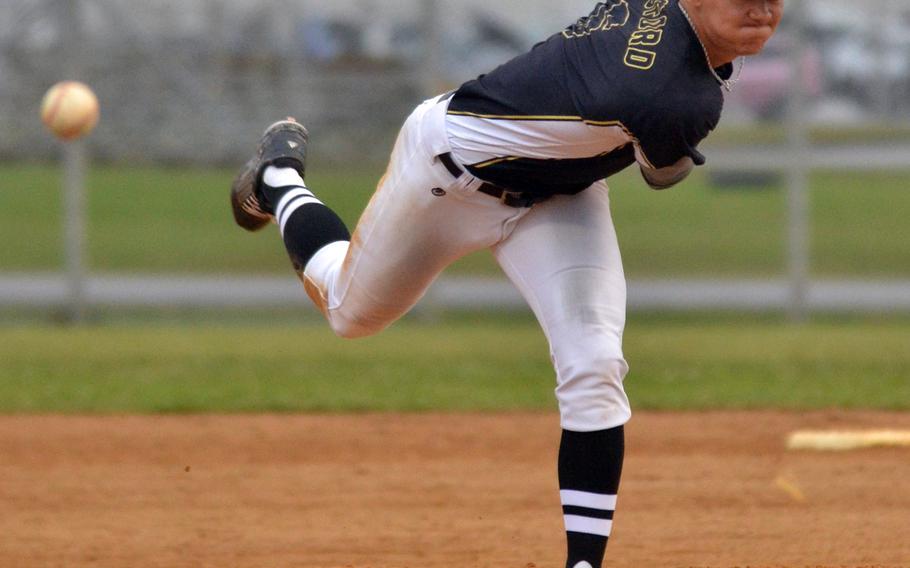 American School In Japan senior right-hander Tyler Sapsford struck out 10 batters in 5 2/3 innings of work, getting a win and a save in the Mustangs' doubleheader sweep of Kubasaki on March 18, 2016.. (Dave Ornauer/Stars and Stripes)

American School In Japan senior right-hander Tyler Sapsford struck out 10 batters in 5 2/3 innings of work, getting a win and a save in the Mustangs' doubleheader sweep of Kubasaki on March 18, 2016.. (Dave Ornauer/Stars and Stripes) American School In Japan's Tyler Sapsford steams for second base ahead of the tag of Kubasaki shortstop Hunter Chipman.ASIJ swept the doubleheader. (Dave Ornauer/Stars and Stripes) 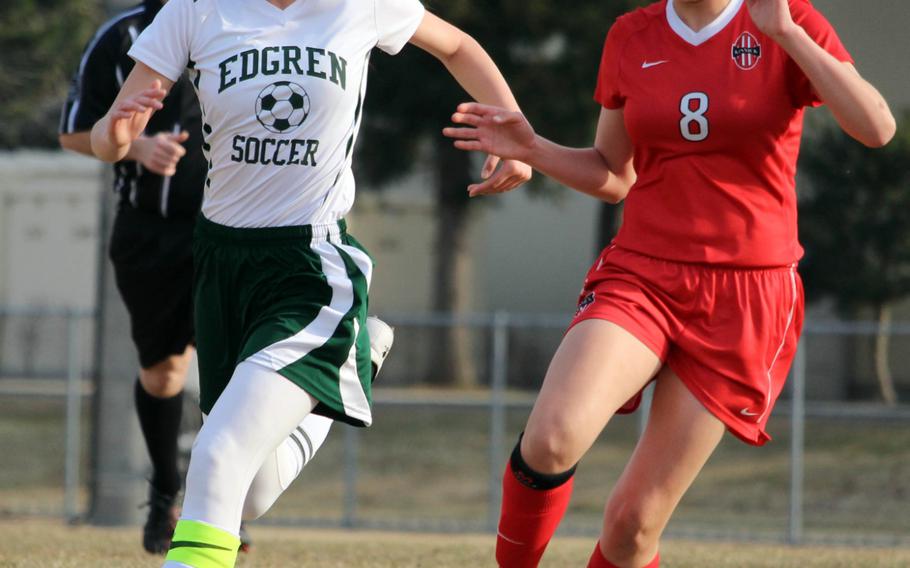 Taejon Christian's Daniel Lee gets set to kick up field with Seoul American's David Brown to his right during Friday's boys soccer match. The teams battled to a 2-2 draw. (Stephanie Kay/Special to Stars and Stripes) 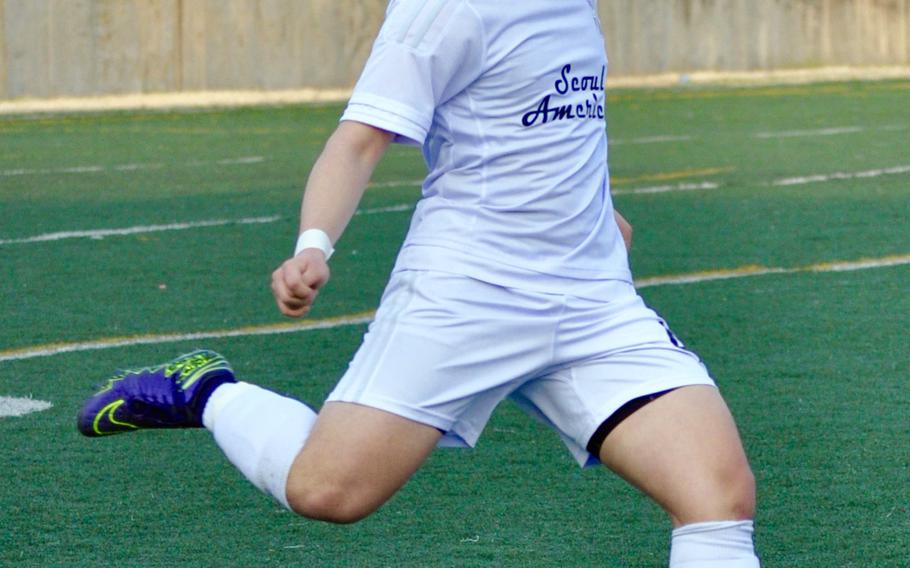 Seoul American's Kevin Hwang sets to boot the ball against Taejon Christian during Friday's boys soccer match. The teams battled to a 2-2 draw. (Stephanie Kay/Special to Stars and Stripes)

CAMP FOSTER, Okinawa — Tyler Sapsford picked up Friday where he left off last May.

The American School In Japan senior right-hander bailed the Mustangs out of a bases-loaded, fifth-inning jam in the opener, getting the save and then picked up the win in the nightcap, as ASIJ swept Kubasaki 10-8 and 13-3.

“He does that a lot. You’ve seen that before,” coach John Seevers said of Sapsford, the reigning D-I Most Valuable Player who has committed to Yale next spring.

Sapsford struck out seven in 2 2/3 innings to close the opener, allowing only one inherited run to score on a wild pitch. He fanned three more in three innings of work in the second game. At the plate, he was 5-for-9 with three doubles, a triple and five RBIs in the doubleheader.

“I was trying to get outs for my team,” Sapsford said of the first-game strikeout binge. “We were feeling the pressure. We won six of seven innings, but to drop the ball in the (fifth) inning was unacceptable.”

What separates good teams from great teams, he said, is to rise up from innings such as that fifth, in which the Dragons scored eight runs to cut a 9-0 deficit to one run.

“We hope to get some more from all of our pitching staff,” he said.

“They’re well coached,” Sapsford said of longtime Dragons’ coach Randy Toor. “They’re good at capitalizing on our mistakes. They came back and made things fall their way. They really challenged us. It was a good experience for us.”

Toor, likewise, had good things to say about Sapsford.

“He’s a great pitcher, he throws hard, throws a lot of strikes, he’s very confident,” he said. “It’s good to see pitching like that. We hope we see him again at Far East,” scheduled for May 19-21 at Yokosuka Naval Base, Japan.

The twin bill was part of a weekend exchange of games between Kadena and Kubasaki of Okinawa and ASIJ and St. Mary’s of Tokyo. The Panthers opened their season strong, beating the Titans 12-2 and 9-8.

In a pitchers’ duel at Yokota Air Base, Edgren’s Brittany Crown recorded 10 strikeouts to nine for Yokota’s Anysia Torres, but the defending D-II champion Panthers rallied from a 2-0 deficit to edge the Eagles, 4-3. Crown helped herself by batting 3-for-3 with two doubles and an RBI.

Strikers also had some shining moments on the soccer pitch.