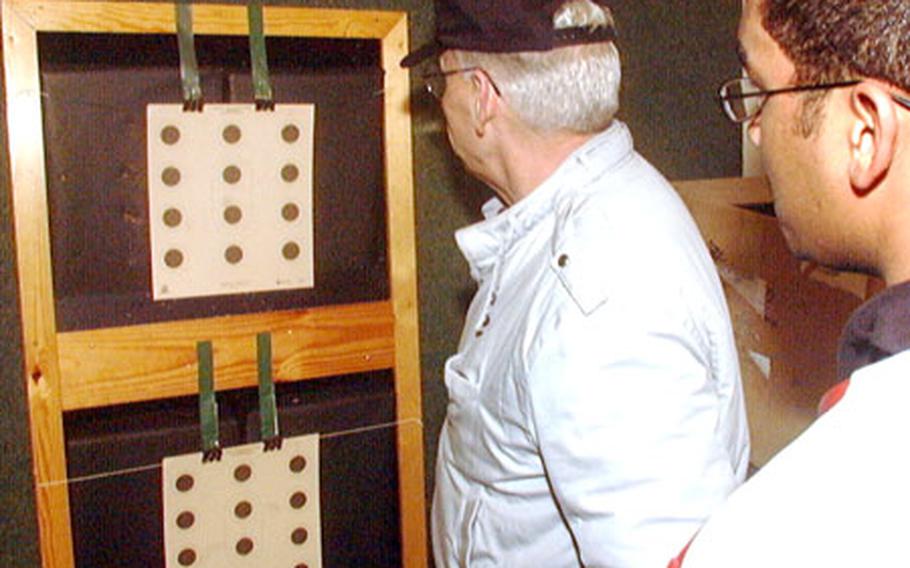 Bruce Andrews, coach of the Hohenfels High School rifle team, checks the marksmanship of a competitor during the 2003 European high school rifle championships. The 2004-05 rifle season was cancelled because of safety concerns with rifle ranges. (Stars and Stripes)

The DODDS high school marksmanship season fell victim to a worldwide safety stand-down this week. But the five-time defending European champion W&#252;rzburg Wolves still have their sights set on a national title.

Army JROTC ranges around the world were shut down just before the European season was to get under way Dec. 4, according to Bob Hase, director of Army instruction for DODDS-Europe.

The high school season was put on hold until new safety recommendations were received. When they were finally issued, it was too late for the season to resume.

The stand-down was the result of a fatality at a military school in the States, Hase said.

&#8220;A cadet accidentally kicked over a rifle. It discharged, and another cadet unfortunately was killed,&#8221; Hase said. &#8220;Even though they were using .22s and we use precision air rifles, the shutdown applied to everyone.&#8221;

The recommendations weren&#8217;t in place until Jan. 12, Hase said, too late to save the DODDS-Europe season, which was to have wrapped up next week at Hohenfels.

Despite the setback, W&#252;rzburg plans on pursuing the national title that barely eluded it last year. It finished second.

&#8220;We entered a postal qualifying match [for this year&#8217;s Junior ROTC nationals] before the ranges were shut down last fall,&#8221; W&#252;rzburg coach Jack Wayne said by telephone Friday.

Entering the postal meet, in which teams receive targets from national organizers, fire at them in the presence of witnesses and return them to be scored by the organizers, proved to be a case of perfect timing for the Wolves.

W&#252;rzburg &#8212; which was the top Army JROTC team and second overall to a Marine Corps JROTC unit from Kentucky by 33 points last year &#8212; would not have had a chance to qualify for this year&#8217;s nationals had it waited any longer to conduct its postal match.

In the meantime, DODDS is making sure the ranges are up to standard.

Ironically, Hase said, JROTC ranges in Europe have always stressed safety, even though they are used for air rifles only.

&#8220;Our safety standards were tight,&#8221; Hase said. &#8220;We had the communities looking at our ranges and were following the [National Rifle Association] rules and procedures the Cadet Command adopted. The safety of our cadets and range personnel has always been our top priority.&#8221;