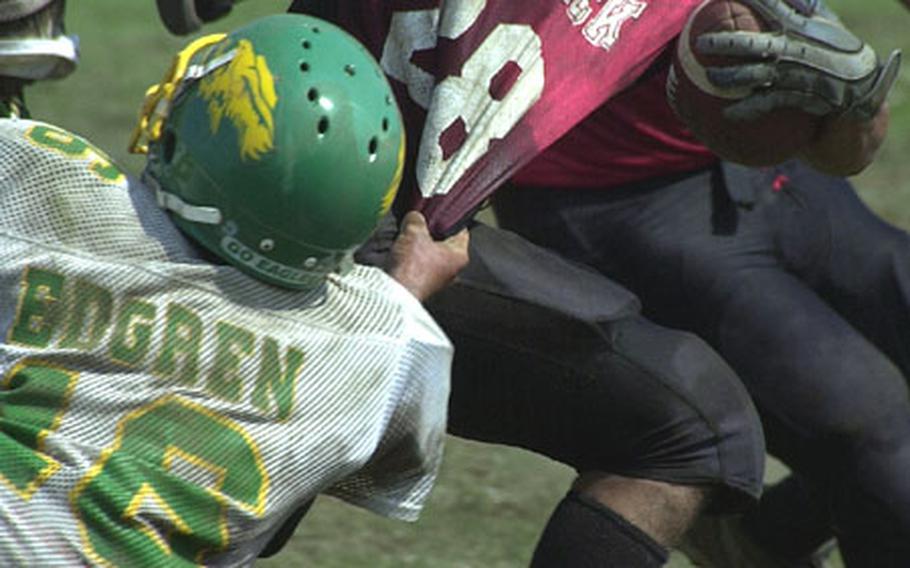 Senior tailback Richie Korth did much of the damage, carrying 20 times for 213 yards, including touchdown runs of 12 and 22 yards. Junior quarterback Leonard Lynce and sophomore tailback Jarvis Williams added a pair of scores each and senior fullback Brenden Lynce one.

Though the yards came against an Eagles team rebuilding under Jim Burgeson, its fifth coach in five seasons, the Red Devils feel they can be just as successful against four-time defending JFL champion Yokota and longtime rival Zama American, which also figures to be in the title mix this fall.

Kinnick left little doubt about its ability to run.

Brenden Lynce, who came to Kinnick from Virginia last December with his brother, Leonard, had 91 yards on 10 carries. Leonard Lynce&#8217;s two TDs came on bootleg runs of 29 and 17 yards; he finished with 45 yards on five attempts.

Bright spots for Edgren, 1-8 since finishing the 2001 season at 5-2, were quarterback Bryan Krueger, who sneaked for a fourth-quarter TD and gained 41 yards on eight carries; and Kyle Deutsh, with a team-high 54 yards on six tries. Dustin West recovered a last-second fumble.