Ready to make a big leap 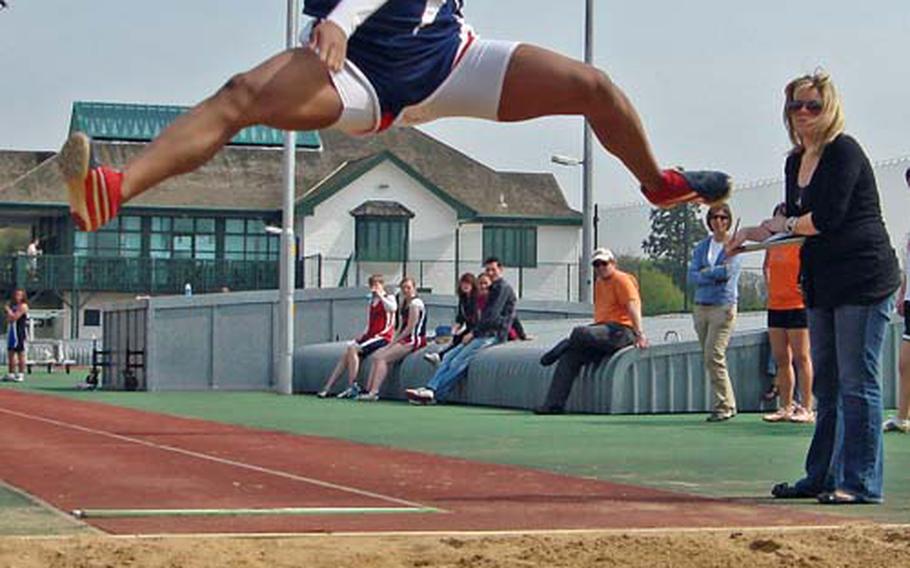 For Lakenheath sprinter-jumper Jasmin Walker, the task at hand is adjusting to climate change.

"The cold weather affects me," Walker said of transferring from the warmth of Georgia to chilly England in February. "I could not jump as well."

Perhaps not as well as her personal best of 19 feet, 7 inches, recorded last year in an AAU meet in Georgia, but very well indeed by DODDS-Europe standards.

"That&#8217;s my goal," Walker said by telephone Tuesday of the long-jump mark.

"I had the crowd cheering me on," Walker said of that AAU jump. "It was a meet record."

Neither mark is all that close to the DODDS-Europe records of 38-6 in the triple, cleared in 1980 by Pat Boston of Mannheim and in 2006 by Lynndsey Hyter of Kaiserslautern, and 11.80 in the 100, clocked by Brenda Givens of Frankfurt and Sondra Thomas of Nuremberg, both in 1975.

Davis thinks Walker is a quick-enough study and a talented-enough athlete to get the hang of it soon.

Walker said she plans to also play volleyball and basketball in her senior season here &#8212; "I like to compete," she said &#8212; but indicated track is her favorite sport by far.

On May 28 and 29, in the European track and field championships, Walker will get her chance to compete, and in the process set her sights on the DODDS-Europe record book by entering the 100, 4x100 relay, long jump and triple jump.

Standing between her and the books, according to Davis, is that climate change.

"Her biggest obstacle is dealing with the weather, getting her warm-ups right," he said.

Walker, however, indicated she&#8217;s on her way to getting things right just in time for Europeans. "I&#8217;m excited," she said, and ready to take a run at breaking some records.