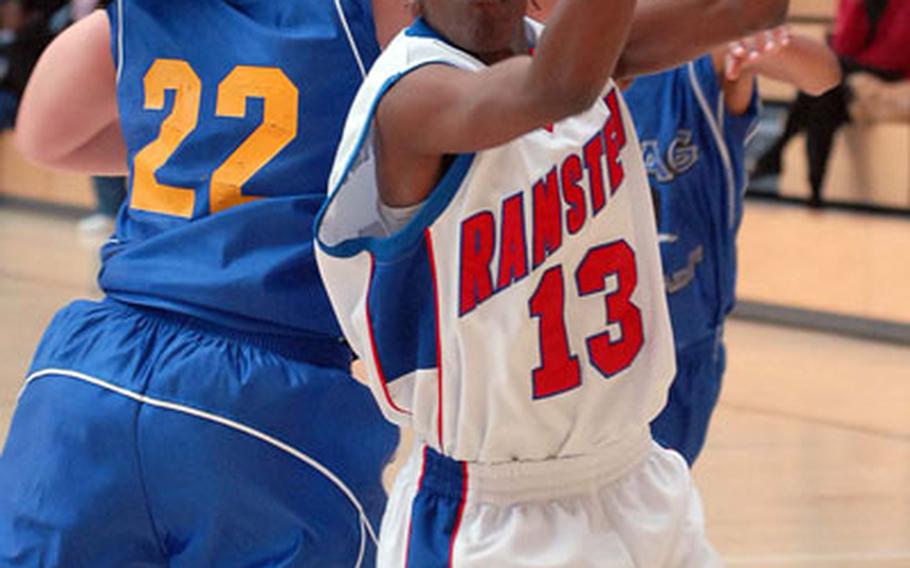 Ramstein&#39;s Cheryl Burney, right, pulls down a rebound in front of Wiesbaden&#39;s Atesha Potter in the women&#39;s final of the Army-Air Force Final Four in Wiesbaden, Germany, on Sunday. (Michael Abrams / S&S)

Ramstein&#39;s Cheryl Burney, right, pulls down a rebound in front of Wiesbaden&#39;s Atesha Potter in the women&#39;s final of the Army-Air Force Final Four in Wiesbaden, Germany, on Sunday. (Michael Abrams / S&S) 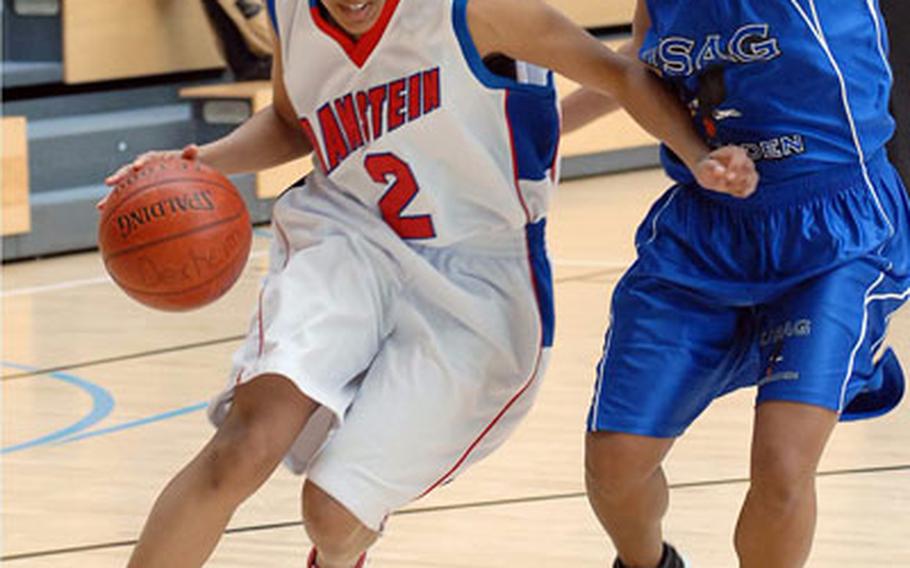 Ramstein played defense at a higher level than just good, jumping on top of Army-Europe runner-up Wiesbaden 22-8 after 11 minutes. Wiesbaden missed its first 17 field goal attempts on its way to a 14-for-63 afternoon (22 percent). A third of Wiesbaden&#8217;s scoring came from the foul line.

The runs were never a serious threat. The last time the Lady Eagles got within single digits was when they trailed 14-6 with 11:25 to play in the first period.

Wiesbaden scoring aces Tania Spann and Atesha Potter combined for only two points in the opening 20 minutes, and their teammate Dana Osborne managed just four in the first half. Osborne led Wiesbaden with 12 points, and Potter and Spann each scored 10, but most of those came long after the outcome had been decided.

Williams scored a game-high 18 points and teammate Arleta Ivey added 14. Not even the loss of inside presence Nessa Burnett to a leg injury with 14 minutes left could slow Ramstein.

Ramstein&#8217;s title-game waltz was the second time the teams had met in this three-day, four-team event which pits the USAFE champion and runner-up against their Army-Europe counterparts. Ramstein downed Wiesbaden 40-32 in Saturday&#8217;s winners-bracket final.

In the 20-minute games which preceded Sunday&#8217;s decisive contests, Wiesbaden stopped Heidelberg 36-24 on Saturday and 34-29 in Sunday morning&#8217;s losers-bracket final.