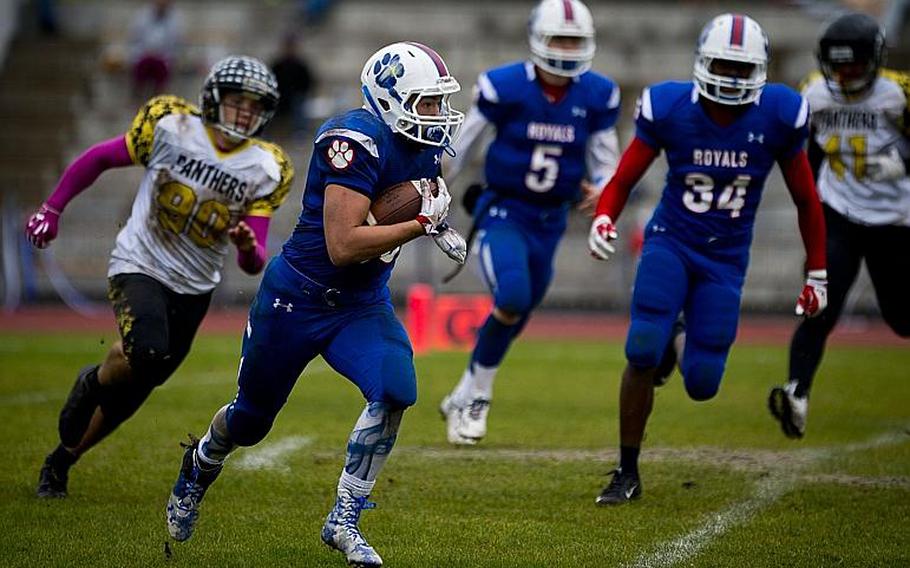 The premier rivalry in DODEA-Europe football is back on its premier stage.

The Ramstein Royals and Wiesbaden Warriors will play for the Division I European championship Saturday at Kaiserslautern High School. Kickoff is scheduled for 5 p.m. CET, following the Division II championship game as the nightcap of DODEA-Europe Final Four football festivities.

While Division I has become known for its parity and unpredictability over the last couple of seasons, Saturday’s matchup represents a return to the familiar.

Including this weekend’s game, the Royals and Warriors will have played for the Division I championship in three of the last four seasons. Wiesbaden earned a 38-21 win in 2013; Ramstein responded with a stunning 17-0 shutout a year later. With each team restocking with fresh talent each summer, the rivalry looked like it could continue indefinitely.

Instead, it went on hiatus.

A lightly regarded Stuttgart team played its way into the 2015 playoffs on the last day of the season, and celebrated by knocking off Ramstein in the semifinals and Wiesbaden in the championship game. The Royals missed the championship game for the first time since 2010, while the Warriors absorbed their second straight title-game loss.

The 2016 season only amplified the disruption. Lakenheath and Vilseck credibly auditioned for the role of Stuttgart-style upstart, and every Division I playoff team had suffered at least one loss by Oct. 8. But the challengers eventually faded.

Lakenheath faltered on its late-season gauntlet against Ramstein and Wiesbaden, and was brusquely ousted in a 58-15 Royal rout in the semifinals. Vilseck, forced by tiebreaker math to open the playoffs at Wiesbaden despite beating the Warriors in the regular season, pushed the Warriors to overtime before succumbing to a 20-17 semifinal loss.

From the most straightforward perspective, Wiesbaden holds the advantage. The Warriors beat the Royals 21-10 in the teams’ Sept. 30 regular-season meeting.

But this rivalry has never been that simple.

In 2013, the Royals beat the Warriors 20-7 in the regular season, but it was Wiesbaden that won the high-stakes rematch. In 2014, Wiesbaden claimed the regular-season win, a 20-14 overtime victory, but Ramstein rallied to blank the Warriors for the title.

If that trend holds, Saturday would be Ramstein’s turn to win. And that’s not the only positive indicator for the Royals.

Wiesbaden has been fighting for survival since losing two straight games to open October. The Warriors entered the last weekend of the season at risk of missing the postseason entirely, a fate they staved off with a defeat of Lakenheath. They squandered a two-touchdown lead to Vilseck in the semifinals and scraped through in the second overtime session. The ordeal left Wiesbaden battered and undermanned, effects that are likely to carry over to Saturday.

Such experiences can serve to galvanize a team and prepare it for future playoff battles. But Ramstein’s less painful path to this game has its own benefits.

The Royals haven’t played a close game since losing to Wiesbaden on Sept. 30. They allowed a total of three points in subsequent routs of Lakenheath, Stuttgart and Kaiserslautern, and routed the Lancers again in the semifinals. While Wiesbaden has been hardened by its grind, Ramstein has minimized wear and tear.

At least, that is, until Saturday.