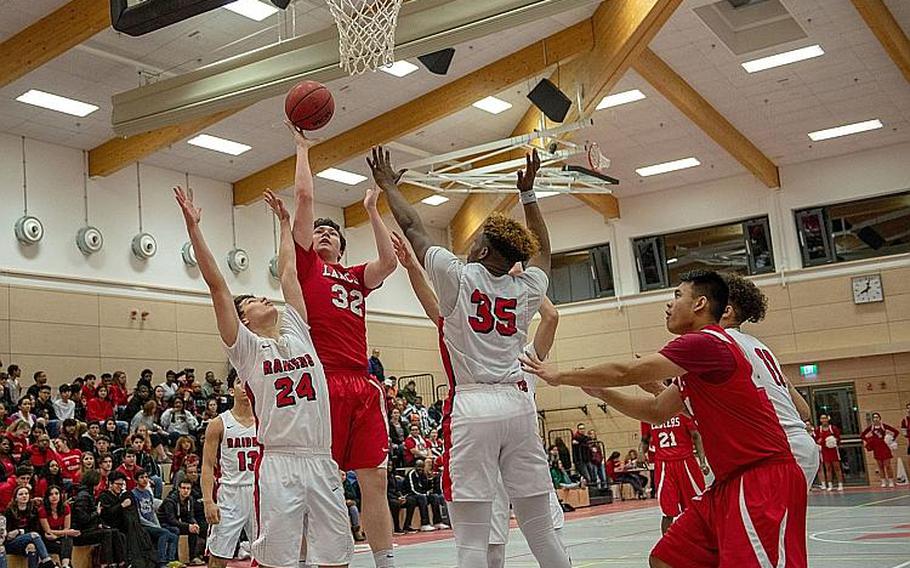 The Ramstein Royals’ quest for a fifth straight Division I title headlines the 2019 DODEA-Europe basketball championship tournaments, running Wednesday through Saturday at sites around Wiesbaden, Germany.

Division I While the rest of Division I chases Ramstein, the Royals themselves are chasing history.

A fifth straight title this week would tie the DODEA-Europe record for consecutive basketball championships, boys or girls. The mark was set by Heidelberg’s dynasty early last decade.

Ramstein has played like a champion this regular season, posting an unbeaten 14-0 overall record, including 13 divisional wins. The senior-led squad is flush with talent and chemistry and has ruled the division for so long now that no other squad has had the chance to gain championship experience.

Still, there are plenty of teams willing to take another shot at ending Ramstein’s reign.

Archrival Kaiserslautern is still stinging from its 46-45 loss in last year’s championship game, not to mention the 60-41 and 65-49 losses its sustained to the Royals this winter. But the Raiders can be dangerous at their best, as they were in a 59-49 January defeat of Wiesbaden and a steady 53-46 win over Stuttgart this month.

Wiesbaden and Stuttgart, last year’s semifinalists, have been up and down this winter but have had moments that suggest they’re capable of another run to the elimination round. Wiesbaden rattled off an eight-game winning streak that spanned most of December and January, while Stuttgart pulled off a hard-fought sweep of Wiesbaden in early February.

Naples has been similarly unpredictable this season. The Wildcats have fared well against limited Division I competition, including a season-opening streak that included a sweep of Lakenheath and a win over Stuttgart. But the team has been middling in regional competition, taking several losses to lower-division Italian opponents.

Among other entries, Vilseck can point to its three-point Feb. 2 loss to Ramstein as proof of its postseason viability; Lakenheath has explosive scorers who might swing some tournament games in their favor; Vicenza got a taste of Division I success with wins over Vilseck and Stuttgart on consecutive December days; and SHAPE is in search of its first divisional win of the season.

Division II Black Forest Academy and Rota have dominated DODEA-Europe’s middle division in recent years, meeting in each of the last three championship games. BFA has won the last two of those meetings, while Rota rolled to the 2016 title.

Those two storied programs could easily meet for a fourth straight time on Saturday, but they’ll have to survive some tough competition to do so.

American Overseas School of Rome, which predated the BFA-Rota takeover with a win in the 2015 title game, appears to have returned to elite status. The Falcons even handed Rota its only divisional loss of the year.

Aviano, last year’s third-place winner, announced its own continuing candidacy in late January with a sweep of AOSR.

AFNORTH, Bahrain and Marymount, each with overall records well below .500, will look to disrupt that projected final four.

Division III Championship favorites don’t get much heavier than the Ansbach Cougars, who have torn through a 5-0 divisional schedule this winter, winning every game by at least 17 points. Skilled and experienced, the Cougars have been the clear class of the division throughout the season.

Defending champion Baumholder, returning runner-up Brussels, 2018 third-place finisher Hohenfels and new Division III entry Spangdahlem represent Ansbach’s toughest challenges, though the Cougars beat all of the above handily in the regular season. Alconbury, Sigonella and Ankara round out the small-school bracket.