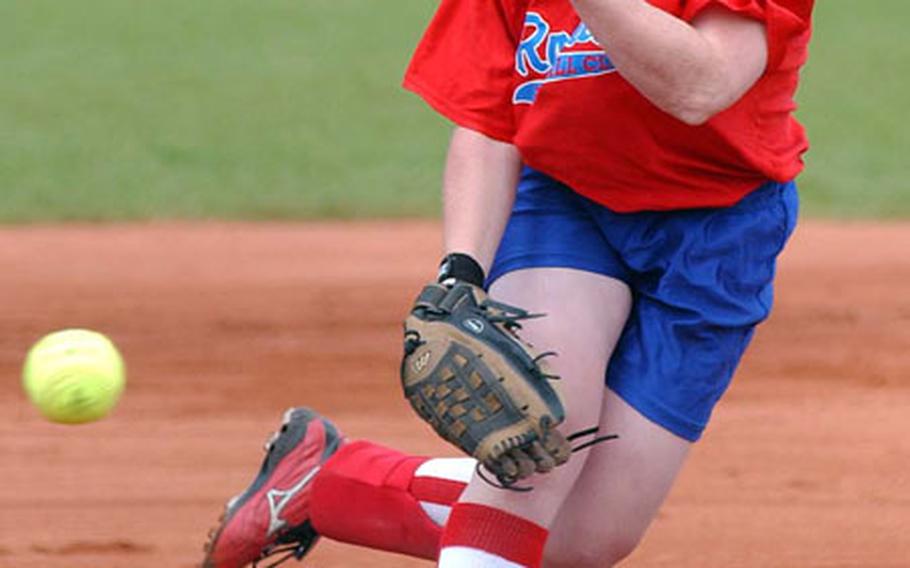 In her last game for Ramstein, pitcher Jenn Morton threw a 1-hitter to help the Lady Royals win the DODDS Division I European softball championship with a 10-0 victory over Wiesbaden. ()

RAMSTEIN AIR BASE, Germany &#8212; The Ramstein Lady Royals steamrolled their way to a 10-0 victory over the Wiesbaden Lady Warriors to claim their second straight Division I softball championship on Saturday.

The Lady Royals scored two runs in the first inning and had a 5-0 lead when junior shortstop Victoria Apodaca expanded the bulge with a three-run triple in the second inning.

Tatreka Polite drove in two runs in the bottom of the sixth inning for Ramstein.

Standout senior pitcher Jenn Morton, who gave up just one hit, said she liked ending her high school years with a shutout.

The Lady Warriors entered the tournament with a 4-8 overall record and a 2-6 mark in the division. Warriors coach Candie Lopez said pitcher Melissa Mueller had to work through the game with a sore shoulder. She is the team&#8217;s only pitcher.

Despite the loss, Mueller said the team&#8217;s advance to second place in the division was a victory.

Ramstein coach Kent Grosshuesch said his team had been dominant the whole year, but losses to Heidelberg and Lakenheath had made them more determined.