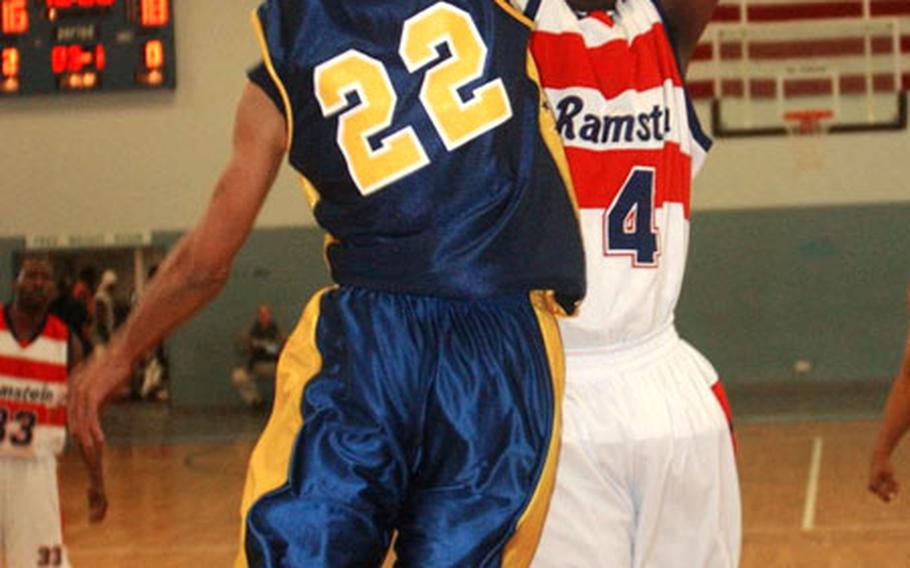 Ramstein&#39;s Troy Miles looks for a backdoor pass while trying to dribble around Heidelberg&#39;s Troy Adams during the title game of the U.S. Forces Europe Basketball Championships in Kaiserslautern, Germany, on Sunday. (Raymond T. Conway / S&S)

The Rams looked to be on the ropes after Heidelberg&#8217;s Andre Barnes followed a two-point jumper 28 seconds before the break with a three-pointer off a Ramstein turnover just seconds later. Heidelberg&#8217;s Craig Marcelin followed with a pair of steals he converted into a lay-up and two free throws in the final 12 seconds.

The discussion centered around how to get the job done.

The Generals, playing without 6-9 Rodney Bailey and with 6-8 Keyatta Mack hampered by a sore hand, grabbed nine offensive rebounds in the first half and converted many into easy buckets.

Control of the boards changed after intermission.

Ramstein transformed its words into a 25-10 run that leveled the score at 60 with 11:35 left in the game. Its improved defense limited Heidelberg to one shot per trip as Paxton Grice grabbed six defensive rebounds &#8212; plus two offensive ones &#8212; during the span. Grice and Brandon LeBlanc revived the offense with eight points each during the run.

Ramstein was back in the game, but the victory wasn&#8217;t secured until the final shot.

After a three-pointer by Marcelin (31 points) cut Ramstein&#8217;s lead to 82-79 with 12.5 seconds to play, Heidelberg was forced to foul Bean on the inbounds pass. Bean, a longtime small-base star for Rhein-Main, sank both of his double-bonus shots to give Ramstein enough of a lead to survive a Barnes three-pointer in the final seconds.

The victory capped Ramstein&#8217;s unbeaten run through the four-day tournament, which pitted the top two Army and Air Force teams in Europe against one another. It also ended the Army&#8217;s domination of this event, which began in 1999.

It was Ramstein&#8217;s toughest victory of the season. That was fine with Batiste.