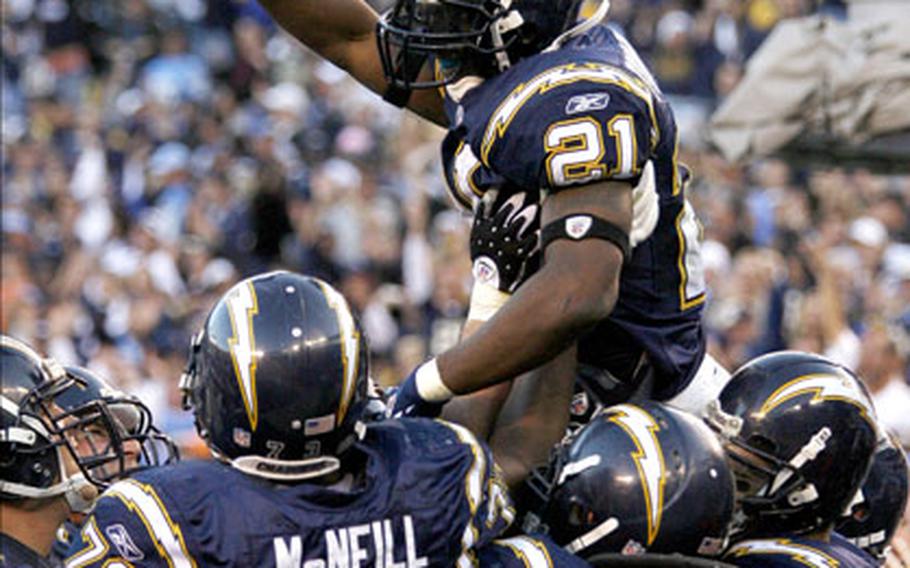 San Diego Chargers running back LaDainian Tomlinson is hoisted by teammates after scoring his 29th touchdown of the season, breaking the NFL single-season record, in the Chargers 48-20 victory over the Denver Broncos in San Diego on Sunday. (Denis Poroy / AP)

With a 48-20 drubbing of the Denver Broncos on Sunday, the Chargers (11-2) clinched the AFC West title and now have the conference&#8217;s best record.

San Diego was 4-2, including a shaky loss in Kansas City, and looked like it would have a tough time catching then-dominant Denver in the standings. But after seven victories in a row, the Chargers look primed for the postseason.

Other AFC contenders do not.

The Indianapolis Colts, who once looked like a lock to have a first-round bye, have lost three of their last four games and are now tied at 10-3 with the Baltimore Ravens in the conference playoff standings.

The New England Patriots, who nearly lost to the lowly Detroit Lions last week, were shut out 21-0 by Miami on Sunday and fell to 9-4.

Both the Colts and Patriots could have clinched a playoff berth with victories. Even though they&#8217;re still likely to get there, the pressure on both squads is building.

On the other hand, the Chiefs and Broncos both looked like postseason locks in November, but would be left out if the season ended today. The Jacksonville Jaguars and Cincinnati Bengals, with the inside track to the wild-card berths with 8-5 records, have been inconsistent the entire year.

If the Chargers can lock up home-field advantage in the AFC, that obviously would be a big boost for the team. They&#8217;ve gone undefeated in San Diego this year, averaging almost 34 points a game in those victories.

Then again, nothing in January is guaranteed.

San Diego has hosted just four playoff games in the last 20 years, with the favored Chargers only going 2-2 in those games.

Over the last decade, the AFC&#8217;s number one seed has reached the Super Bowl only three times. By comparison, the NFC has sent its best team five times.

And the last time southern California saw January football was 2004, when the heavily-favored Chargers (12-4) fell in overtime to the New York Jets (10-6).

So Chargers fans might not want to book tickets to Miami just yet. Besides, the weather in San Diego is almost as nice as south Florida in the winter.

Instant replayAFN Sports will show the upset of the week, the Jaguars&#8217; 44-17 manhandling of the Colts, at 2 p.m. Central Europe Time on Wednesday.

Jacksonville&#8217;s 375-yard rushing performance was the second-highest total since 1970 and featured two running backs with over 130 yards. Indianapolis wide receiver Marvin Harrison made his 1,000th reception in the game, but the Colts had little else to celebrate.

Also on Wednesday, at 3:30 p.m. CET, watch the Arizona Cardinals come back to steal a 27-21 upset victory against the division rival Seattle Seahawks. Almost everyone on both rosters got involved in this game: 16 players caught at least one pass, and 29 players made at least one tackle.

On Thursday at 2 p.m. CET, watch the Saints hold a passing clinic in their game against the Cowboys: Drew Brees threw for 384 yards and five touchdowns, including three in the third quarter alone.

And on Friday morning at 2 a.m. CET, Week 15 of the NFL schedule will start off with the Seahawks hosting the 49ers in a chance for the home team to clinch the NFC West.

Fantasy surprisesThis was the first week of fantasy football playoffs for many leagues, but someone forgot to tell the NFL&#8217;s statistical superstars.

Peyton Manning, Tom Brady and Steve Smith all had lousy weeks when fantasy owners needed them the most. Other usually reliable fantasy starters like Larry Johnson and Brian Westbrook posted sub-par statistical days, failing to find the end zone.

For example, running back Artose Pinner came into Sunday listed fourth on the Vikings depth chart and was owned in just 0.1 percent of ESPN.com&#8217;s fantasy leagues. But he rushed for 125 yards and three touchdowns against the woeful Lions defense, making him one of the top fantasy backs of the week.

And the top passer in distance for the weekend was Carolina quarterback Chris Weinke, who threw for 432 yards and one touchdown, but also tossed three interceptions.

Of course, any argument that Weinke is a better quarterback than those three is really a fantasy.