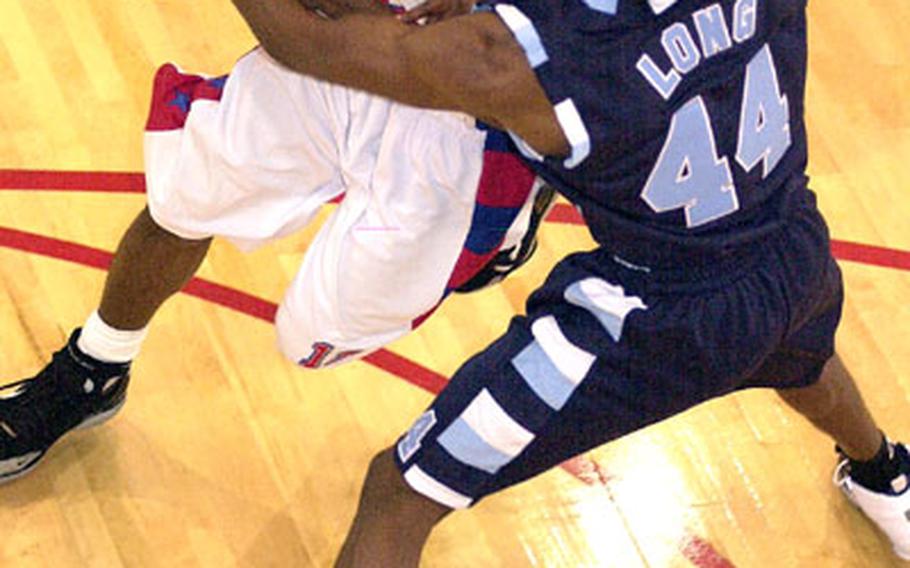 Wallace Ruff, left, of Korea&#39;s Camp Humphreys Bulldogs has the ball slapped out of his hands by Clinton Long of Korea&#39;s Yongsan Runnin&#39; Rebels during Tuesday&#39;s game, which the Bulldogs won 91-77. (Dave Ornauer / S&S)

Wallace Ruff, left, of Korea&#39;s Camp Humphreys Bulldogs has the ball slapped out of his hands by Clinton Long of Korea&#39;s Yongsan Runnin&#39; Rebels during Tuesday&#39;s game, which the Bulldogs won 91-77. (Dave Ornauer / S&S) 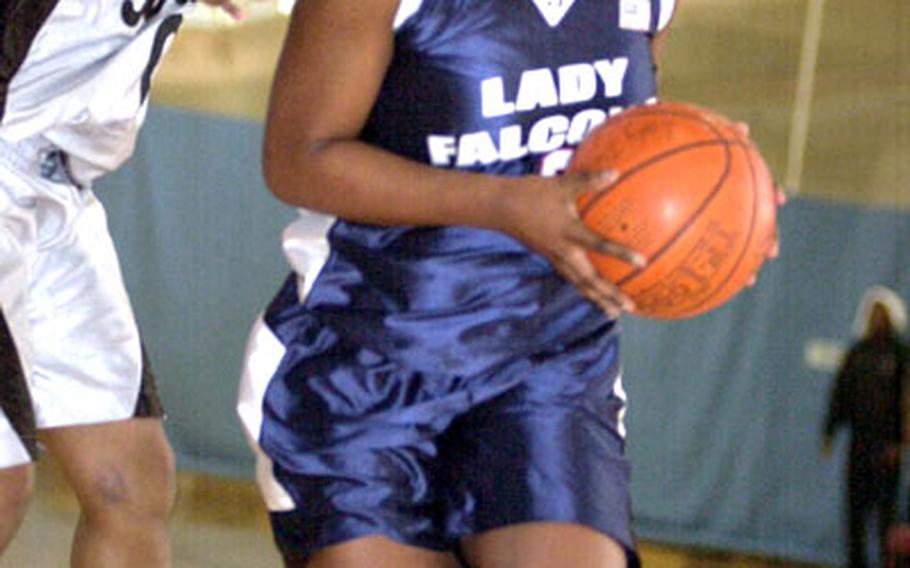 Senior Janel Daniels of the Seoul American High School Falcons drives to the basket during Tuesday&#39;s round-robin play. The Falcons upset the Cobras, 55-41, the first victory by a girls high school team since the Osan tournament&#39;s inception in 1987. (Dave Ornauer / S&S) 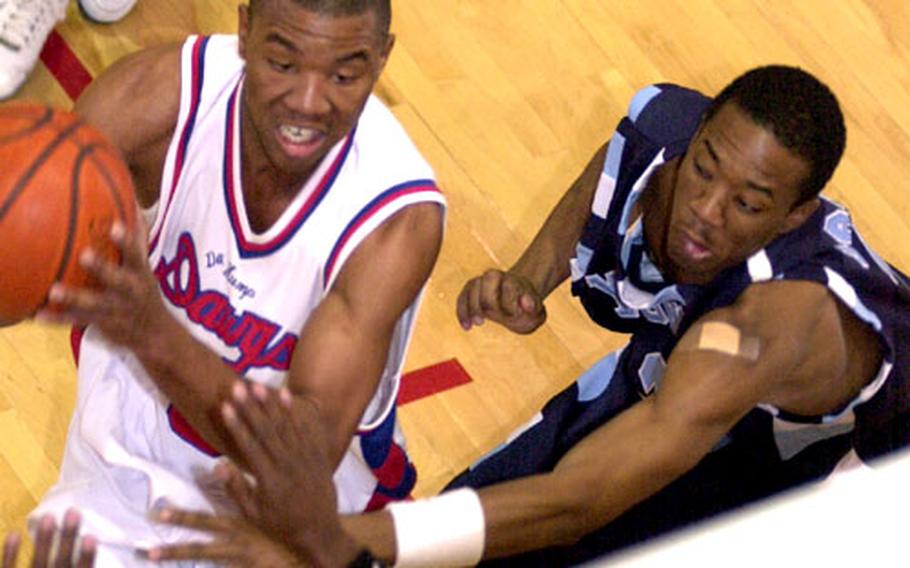 OSAN AIR BASE, South Korea &#8212; For three base high school teams, this week&#8217;s Osan Pacificwide Open Holiday Basketball Tournament has been a different sort of classroom.

The learning curve has varied by team:

&#182; Seoul American&#8217;s girls lost their opener by 20 points to Osan American but then fell by a combined seven points in their next three games. In a two-point loss to Camp Humphreys and a one-point setback to Yongsan Garrison, the Falcons had chances to win in the closing seconds.

The Falcons broke through on Tuesday. Led by senior Janel Daniels&#8217; 21 points, the girls joined the boys team in the win column with a 55-41 victory over Suwon.

But players, coaches and tournament officials said the experience in beneficial.

When Pacificwide open tournaments such as the Martin Luther King on Okinawa have opened their doors to high school teams, they&#8217;ve been a platform for the younger players&#8217; experience and growth.

Since 1995, Kadena and Kubasaki High Schools on Okinawa have played in the MLK. Only a few times did their boys or girls teams make the playoff round. Kadena&#8217;s and Kubasaki&#8217;s girls placed third and fourth in the MLK last year, the highest any prep team has finished there.

When Osan American entered its boys and girls teams in the 2002 Osan tournament, each finished 0-5 in round-robin play and failed to win any playoff games.

The Falcons&#8217; closest game in this KAIAC season was a 31-point victory over Osan American. Coach Charlotte Hicks said she wanted something a little tougher, and the Osan tournament has given just that to a team that will host the Class AA tournament in February.

But the tournament has risk; fear of injury while facing more aggressive players sometimes can lead to intimidation. That&#8217;s why players must &#8220;keep it real,&#8221; said Osan American senior guard Chris Durham. &#8220;Everybody knows their limits. You don&#8217;t try to match their physical play but stay within yourself. I&#8217;m not intimidated at all. Others, you can see they are, but you can see them play better as they play more against these guys.&#8221;

Mason and other tournament officials said they took pains to impress on post-team coaches how they, too, can help with the prep teams&#8217; growth.

Injuries are &#8220;a concern to us but in our coaches&#8217; meeting, we tell them the primary purpose of high school teams here is to help them progress and develop,&#8221; he said.

Coaches and players try to do their part with mentoring the high school players.

Sometimes a military player will get a high schooler one-on-one during a break in the action and impart &#8220;small hints&#8221; to help improve the younger player&#8217;s fundamentals, said Osan swingman Ramon Moss.

Wherever the three prep squads finish, the lessons they learn this week are priceless, Collins said.