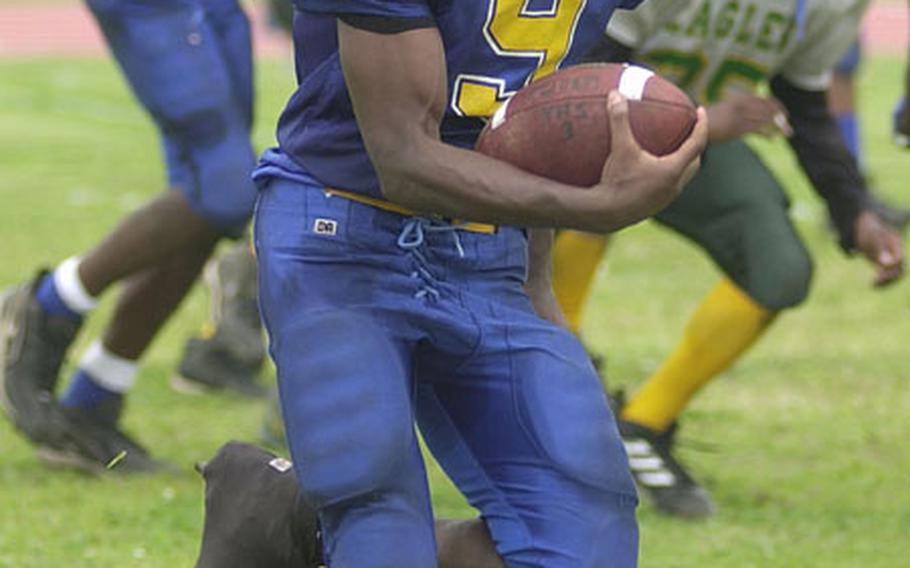 YOKOTA AIR BASE, Japan &#8212; One Roach departs, another takes his place. And for the Yokota Panthers on Saturday, the second Roach&#8217;s heroics yielded a Pacific-record 40th consecutive win on the field.

Senior tailback Chris Roach piled up 215 yards and scored six times on just nine touches and the Panthers rolled to a 56-7 triumph over the Robert D. Edgren Eagles.

Especially encouraging was the performance of Roach, whose older brother Roy graduated last June after breaking the JFL season rushing record with 1,891 yards.

Chris Roach, who gained 1,051 all-purpose yards and scored 18 touchdowns last season at wingback, moved into Roy&#8217;s featured back spot and performed just as capably, scoring the last five times he touched the ball.

The last of those was a 71-yard punt-return touchdown. He bobbled the punt, then picked it up, crossed the field to the left sideline and ran untouched into the end zone.

Despite the blowout, Pujol feels there&#8217;s plenty of room for improvement.

&#8220;Gap control, proper pursuit on defense. We had some blown assignments, we left some people unblocked at the point of attack,&#8221; Pujol said.

Of the 40 victories, the two which opened the 2002 season had to be vacated when Pujol discovered the Panthers had used an ineligible player, leading some to say the streak isn&#8217;t legitimate.

The coach of the vanquished Eagles was suitably impressed.

The Eagles play their home opener Saturday against ASIJ, which is making its first football road trip out of the Kanto Plain in school history. Yokota hosts Zama American on Friday.

Matt Sgro and Vinson Calvo each recovered fumbles in the end zone and Vince Phillips scrambled 9 yards for a touchdown for the Friars, who also scored a safety and forced five fumbles.

Guam High was held to 31 yards on the ground and minus-10 passing. Dustin Lopez set the pace for the Panthers with 28 yards on three carries, and Joey Chop had a team-high eight tackles.