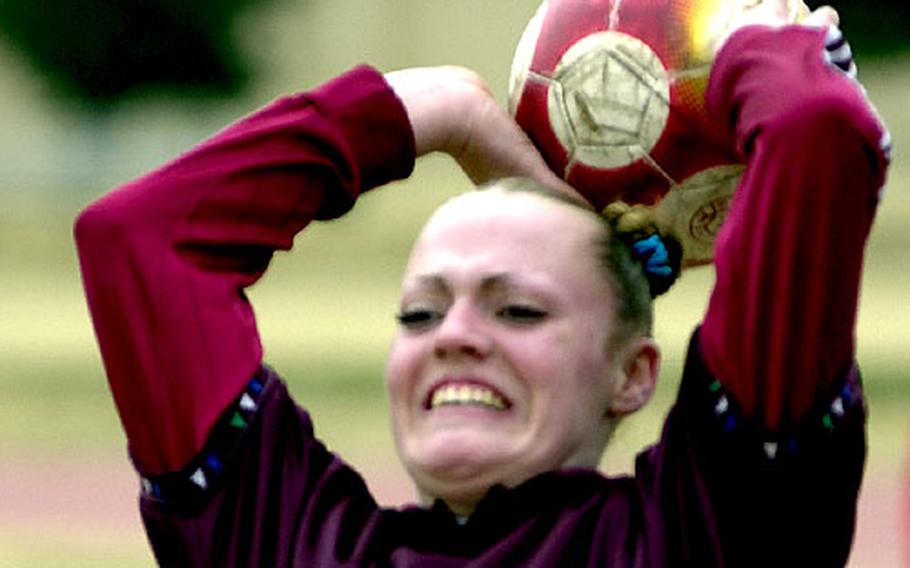 Freshman Kaili Rowland of the Matthew C. Perry Samurai has been battling a deep bone bruise since the fall, but has played on through the volleyball, basketball and soccer seasons without missing a game. (Dave Ornauer / S&S)

The painful reminders are there every day, in virtually everything Kaili Rowland does.

It begins the moment the Matthew C. Perry freshman wakes up and gingerly sets her right foot on the floor. It follows her through every class, then worsens when she takes the field for a soccer workout, just as it did during volleyball and basketball seasons. It really flares during games.

The ache governs her every move, making each step upfield a major undertaking, a few winces on her face completing a tableau of determination and pain.

Some might have sought advice from the nearest orthopedic surgeon. But that would take up precious time.

The source of Rowland&#8217;s anguish is a deep bone bruise in her right ankle, suffered in October during a volleyball match.

Rather than hit the sideline, Rowland continued to play in pain, through the end of volleyball season. Three days after volleyball ended, basketball practices started. Basketball gave way to soccer in February.

A native of Grand Rapids, Mich., Rowland, whose first name is pronounced Kay-lee, has played soccer and basketball and run track and field since she was 9, encountering many bumps and bruises along the way.

Perry endured a winless regular season in volleyball, and won just one of its nine matches in the Far East Class A tournament.

The Lady Samurai fared better in basketball. Despite having just five players available because of injuries and parental worries about security in South Korea, Perry made the Final Four of the Class A tournament.

The adversity helped the Lady Samurai bond, and allowed Rowland to forget about her injury &#8212; at least for a while.

&#8220;It made us have more confidence in ourselves, and made us play stronger and harder than we had been,&#8221; she added.

Freshman Samantha Gingras, a team manager until forced into the lineup by the roster crisis, and now Rowland&#8217;s soccer teammate, said her resolve inspires the entire team.

Whether Rowland can finish the soccer season, which culminates with Perry hosting the Class A tournament April 29-May 1, is uncertain. Following a weekend trip to Yokota for two matches, both losses, Rowland planned to visit a doctor to get her ankle evaluated.

Ask Rowland what she would tell somebody else in her situation, and the answer might surprise you:

Convincing herself is another matter entirely.