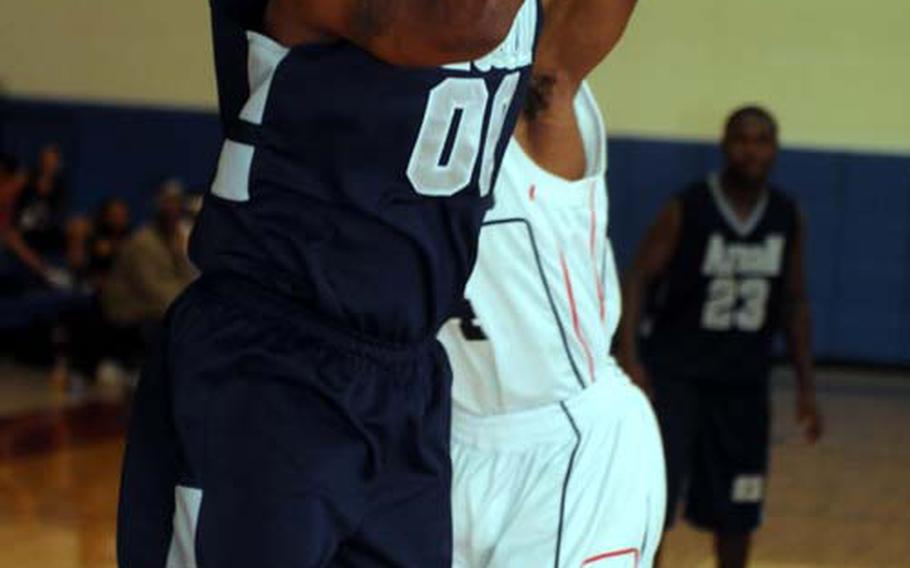 Brett Eason of Area III All-Stars shoots past an Osan Air Base defender during Saturday’s champion-bracket game in the March Madness Tournament. Eason had 22 points in a losing cause. (Dave Ornauer / S&S)

Jayson Brunson and Guam High are where they want to be, perched as the No. 1 seed entering next week&#8217;s island boys basketball playoffs. But coach Joe Taitano says the Panthers&#8217; work is just beginning.

"I feel good in terms of what we&#8217;ve done," Taitano said, referring to the Panthers getting things done on both ends of the court. "I feel we&#8217;re a lot better team than we were last year."

But to show it, the Panthers must get through the early playoff rounds &#8212; they host on March 16 a team to be determined in the quarterfinals &#8212; to reach the semifinals and championship on March 18 and 20 at the University of Guam Field House.

"Getting the kids motivated and going and focused at all times," Taitano said of the challenge. "If we can hang for another two weeks, we have a possibility of winning the championship."

Derrell Brunner added 14 points and Paul Floyd 12 for Guam High, which led the Friars from start to finish Friday.

Guam High has never won an IIAAG title, but has one Far East basketball tournament title to its credit, winning the Class A crown in its first year of existence, 1997-98. The Panthers took sixth in the Class AA Tournament last month.

The facility was built on reclaimed land and is actually located several feet below sea level, next to a seawall on the base&#8217;s south side. Whenever it rains &#8212; as it did, hard, all night Friday and all day Saturday &#8212; Penny Lake has a tendency to flood.

"The field is under water. The squeegees are out. But we&#8217;re playing," Perry boys coach and tournament organizer Mark Lange said Saturday morning during a break between matches when he and other helped push water off the field.