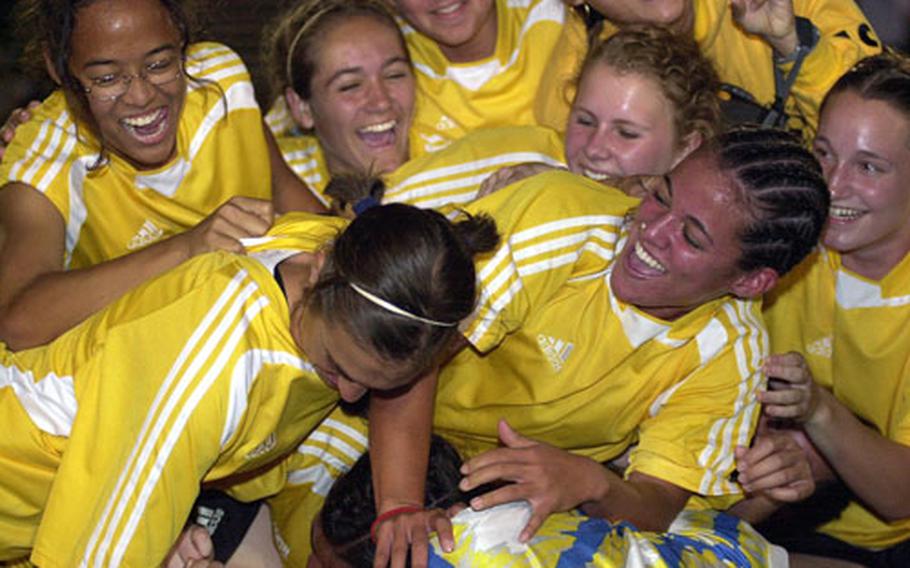 Katie LaGrave and Dianne Abel, selected the tournament&#8217;s Most Outstanding Player, scored goals and Theresa Gittens posted a shutout, the Panthers&#8217; 19th in 21 games this season.

Led by sophomore Dianne Abel&#8217;s region-leading 34 goals and the exploits of wingers Katie LaGrave and Vanessa Williams (17 goals each), the Panthers have plenty of offensive firepower. But coach Hoa Nguyen has stressed defense &#8220;from Day 1&#8221; of the season.

Abel&#8217;s freshman sister Jennifer set up the first goal of the match in the 23rd minute. She lofted a free kick that went through keeper Debra Kinzley&#8217;s hands. A pack of Panthers charged toward the loose ball, with LaGrave scoring from point-blank range.

Dianne Abel scored an insurance goal in the 76th minute, gathering the rebound of a Williams shot from close range and knocking it past Kinzley.

Amid the celebration came a harsh reality for Kadena: There are seven seniors on the team.

Chumley praised her youthful squad, which will count Foote among a handful of returnees next season. Foote has 89 goals in three seasons.

Kadena&#8217;s girls joined the Panthers&#8217; boys team in wiping away a bit of unsavory history.

Three previous times that Kadena and Kubasaki met in a Class AA final, the team that won the Okinawa Activities Council season series lost to the other in the championship.