Panthers get total package: Brothers give Kadena strong inside presence 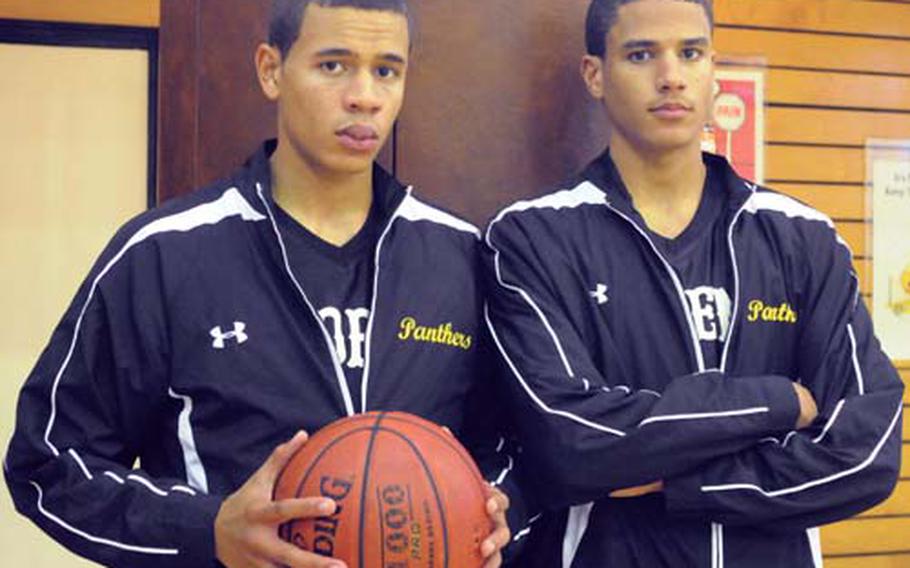 It was already going to be a very good Kadena boys basketball team, with six players returning from a team that went 31-14 and finished sixth in Class AA last season. But the inside presence of senior Jeremy Howell, with ball, and junior Jason Sumpter makes the team even stronger, coach Robert Bliss said. The Panthers are 9-0 and won the Hong Kong International tournament title last week. (Dave Ornauer / S&S)

KADENA AIR BASE, Okinawa &#8212; If the two had been mailed to Okinawa in a postal package, the note from Brussels American School to Kadena coach Robert Bliss might have read:

The two had played JV ball for Kadena two seasons ago before moving to Belgium to live with their father, John, a retired Army master sergeant working at the U.S. Army Garrison there. But they came back this summer to be with their mother, Sherri, who works at Torii Station.

So far, they have made a big difference. Sumpter has averaged 15 points and 12 rebounds and Howell 11 and seven for the Panthers, 9-0 and champions of last week&#8217;s 40th Hong Kong International School Holiday Tournament.

&#8220;What was missing last year and what it seems every powerhouse team has is a strong finishing presence, a strong big man,&#8221; Bliss said.

Bliss noted that the brothers&#8217; games have taken huge leaps forward; they were each all-region selections in Europe and helped the Brigands to third place in the Division IV tournament.

The brothers say playing against smaller Japanese players this season and the bigger, more physical European players last year have given each a more &#8220;well-rounded game.&#8221;

Are the two happy they returned to Okinawa?

So far, that hard work has led to an average victory margin of 23.6 points; only once has Kadena won a game by less than 10 points, beating Hong Kong 79-76 in a pool-play game. And other schools have taken notice of Kadena&#8217;s play, especially the brothers.

&#8220;Put those two pieces in there, that expands their offensive firepower,&#8221; said coach Kevin Baker of Seoul Foreign, which lost 89-68 to Kadena. &#8220;The dimension they bring is impressive. They present that dual threat along with what they have outside. I was impressed with how well they played away from the ball. And when Kadena subbed, they didn&#8217;t drop off as a team. Good balance, speed and quickness.&#8221;

All that has Bliss smiling aplenty.