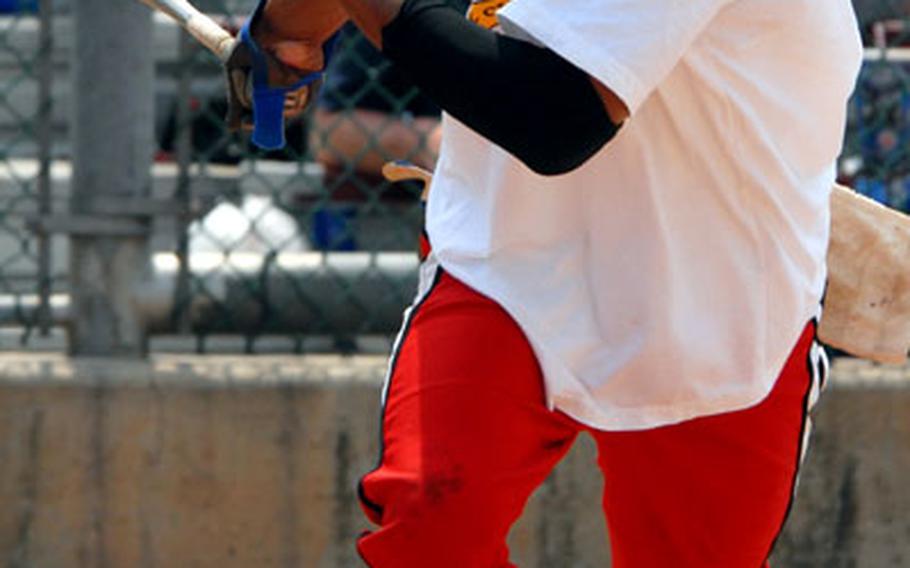 Lynell "Nelly" McLeod watches the first of his two in-park home runs sail to the fence against Los Guzzleros during Monday&#39;s men&#39;s championship. McLeod, a civilian at MacDill Air Force Base, Fla., went 4-for-4 with two doubles and three RBIs. (Dave Ornauer / S&S)

Lynell "Nelly" McLeod watches the first of his two in-park home runs sail to the fence against Los Guzzleros during Monday&#39;s men&#39;s championship. McLeod, a civilian at MacDill Air Force Base, Fla., went 4-for-4 with two doubles and three RBIs. (Dave Ornauer / S&S) 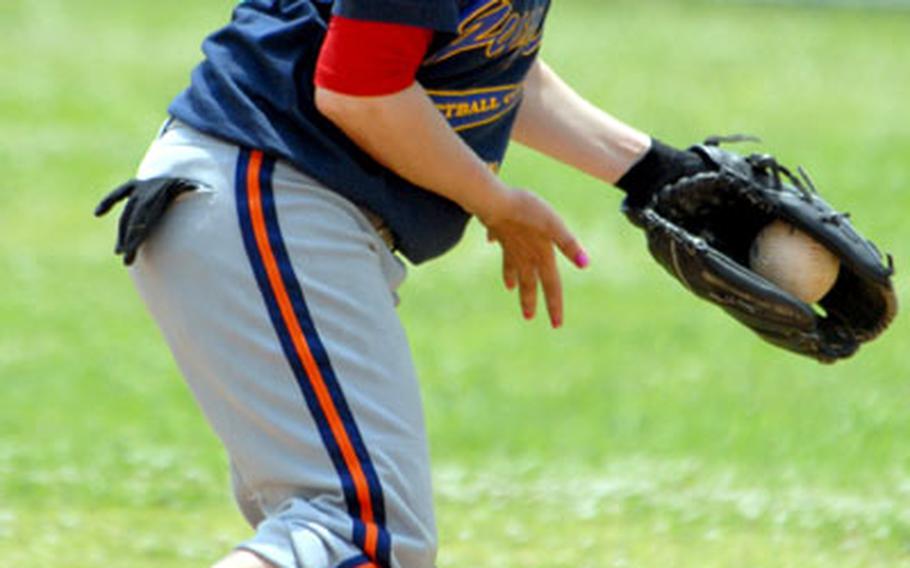 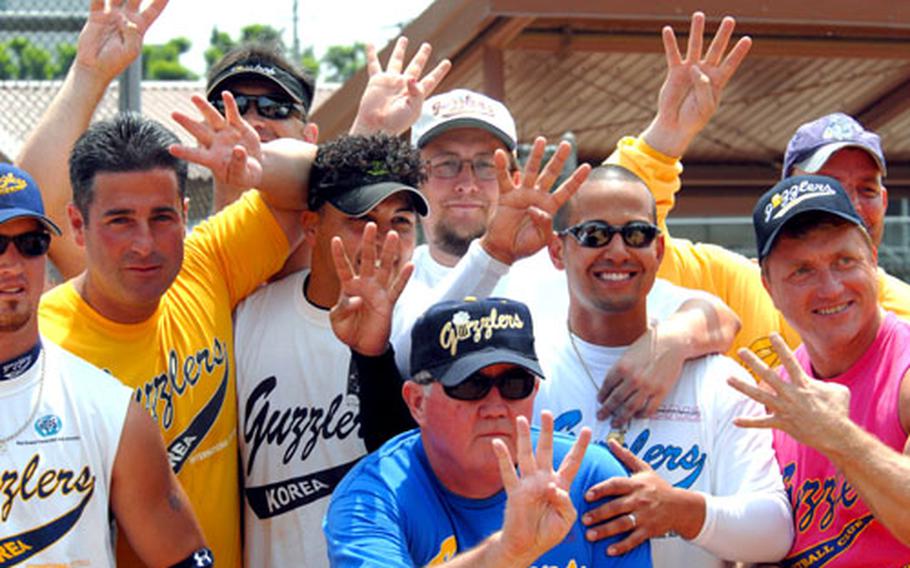 Kazue "Jo-Jo" Dancer and pinch-runner Gracey Martinez each got thrown out at home plate as Team USA fell to Sang Ji University, a Korean team,4-3 in nine innings in the second and deciding final game. Team USA managed just five hits in losing the first game 8-0.

On the men&#39;s side, the powerhouse International Guzzlers of South Korea left no doubt in winning its fourth straight title. Theybanged seven home runs, two each by Lynell McLeod, Elmer Mason and Jon Nicholson, in routing Los Guzzleros 25-6 in three innings. Both teams belong to Yongsan-basedGuzzlers International Softball Club, a non-profit organization.

Women&#39;s championshipA master sergeant stationed at Kirtland Air Force Base, N.M., Acostacobbled together the team, comprised mostly of former or current All-Service players from as far away as Lajes Field in the Azores.

Aside from the failed baserunning gambles, Team USA managed just eight hits in the first 11 innings of the two games &#8212; out of character, consideringTeam USA outscored its first five opponents 75-2 and had beaten Sang Ji 9-6 and 12-4 in their two previous meetings.

"We waited too long to hit," Acosta said. "You can&#39;t wait until the fifth inning. I was really proud of the way we played" entering the championship. "It&#39;s disappointing."

In the second game, Team USA had managed just three hits and trailed 1-0, on a third-inning Sang Ji sacrifice fly, enteringthe fifth inning. Dancer, of Lajes Field,reached on a fielder&#39;s choice and moved to second on Kischa McCloud&#39;s single. Becca Tongen grounded into a fielder&#39;s choice, but when Acosta gambled and sent Dancer home, she was thrown out sliding.

Team USA tied itin the seventhon an RBI single by Rachel Smith of Yongsan Garrison, but stranded two runners in scoring position. That happened in the eighth, when Tongen, of McChord Air Force Base, Wash., and Shannon Thomas of Kadena Air Base, Okinawa, each singled.

Martinez, of Kunsan Air Base, South Korea, pinch-ran for Tongen, then Roxanne Finks of Area IV, Daegu, South Korea, singled up the middle. Martinez was sent home by Acosta, but a perfect relay throw from the outfield nailed her.

The next batter, Karrie Warren, an Air National Guardsman at Tyndall Air Force Base, Fla., flew out to end the inning. "I should have kept Gracey at third," Acosta said. "With one out, Warren would have hit a sacrifice fly and we would have won it."

Sang Ji broke it open with three runs in the ninth, but Team USA refused to quit. Inspired by the men&#39;s champion Guzzlers, rhythmically clanging team coins against the backstop poles, Holly Vanwert of Fort Wainwright, Alaska, singled in a run and Dancer drove in another on a fielder&#39;s choice.

But McCloud, of Nellis Air Force Base, Nevada, flew out to right fieldto end it with runners at first and third.

It was the first time that the brother teams had ever played each other. Los Guzzleros was founded by Guzzlers club president Tom Costello a few years ago when he had no berths left on the parent team. The Guzzlers began as a company-level ballclub in the early 1990s, and after Costello took the team&#39;s reins in 2001, it has won this tournament five times.

"Over the years, we talked" about the teams facing each other in such a setting, "but we didn&#39;t think it was possible until today," Costello said.

It was no contest from the beginning, when McLeod, a civilian at MacDill Air Force Base, Fla., hit the first of his two in-park homers to lead off the game. He went 4-for-4 with two doubles and three RBIs.

Elmer Mason, of Fort Knox, Ky., went 4-for-4 with two homers and five RBIs. Jon Nicholson, a California Army reservist, was 3-for-3 with two two-run second-inning homers and five RBIs. Ten-time All-Army player and former All-Army coach Andy Watts went 4-for-4 with a double, a triple and four RBIs. The Guzzlers scored nine first-inning runs and added 12 in the second.

Alex Willer and Doug Gist each managed two hits and an RBI for Los Guzzleros.

All told, the parent Guzzlers roster included six former or current All-Army players, which Costello said lent an air of chemistry to the ballclub.

"Everybody was comfortable and confident with them here," Costello said. "Even when we weren&#39;t playing well, there was no doubt. We felt we couldn&#39;t lose."

Costello pooh-poohed the notion that it wasn&#39;t fair for the Guzzlers to "stack" their team, since it&#39;s an open tournament and Okinawa-based teams such as Pacific Force, which won this tournament seven times, did the same thing in the 1990s.

"If it wasn&#39;t for the open teams, we wouldn&#39;t have much here," said Costello, who assisted Yongsan&#39;s post team under coach Warren Holland until leaving to head the Guzzlers in 2001. "I know how it feels to be on the other end."

At least one team vanquished by the Guzzlers, American Legion of Okinawa, feels that if they can&#39;t beat them, they&#39;ll have to follow suit.

"We have to recruit," said coach John O&#39;Brien, whose Legion team won the tournament in 2003 as Yellow Box. "They (Guzzlers) were just better than us."