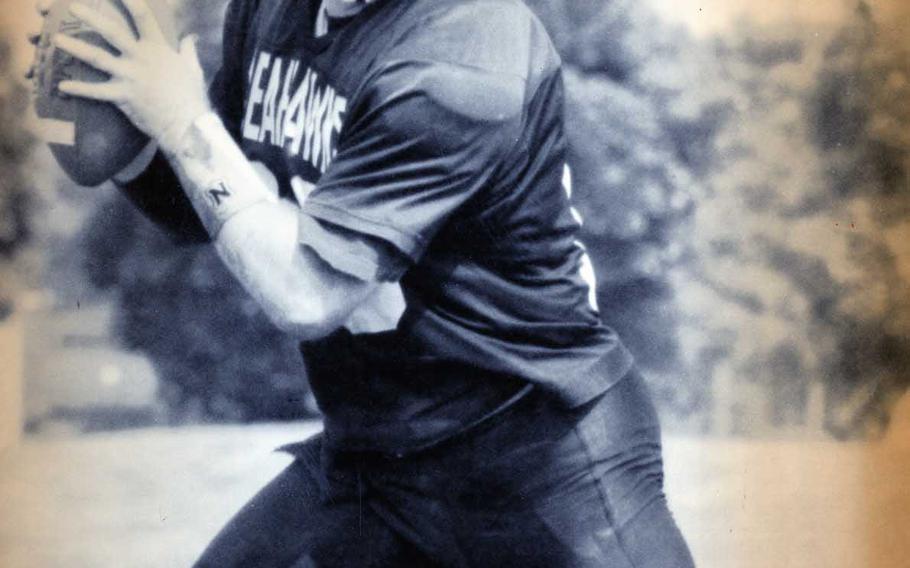 Buy Photo
Former Yokosuka Seahawks and Greyhawks quarterback Michael Reedy died on Aug. 3 of a heart attack in his sleep in his hometown of Mililani, Hawaii. He was 58. (Stars and Stripes file photo)

One of Yokosuka Naval Base’s standout football players in the mid- to late-1990s, Michael Reedy, died of a heart attack in his sleep on Aug. 3 in his hometown of Mililani, Hawaii. He was 58.

Reedy, a longtime civilian with the Defense Information Systems Agency at Yokosuka and in Hawaii, quarterbacked the Yokosuka Seahawks base football team in the 1990s and also the base’s senior gridiron team, the Greyhawks, to unbeaten seasons in 1997 and ’98.

Reedy also worked as a referee for both the NFL and college football, assigned to NFL American Bowl exhibition games in Tokyo as a linesman and University of Hawaii home games and the annual Aloha Bowl post season game.

“He was an awesome gentleman, a family man and a leader,” said Kevin Haws, a retired Navy captain and former U.S. Naval Hospital Yokosuka commanding officer who refereed games that Reedy played. “Really sad. Mike was a good friend.”

Current Seahawks coach James Price arrived at Yokosuka 22 years ago during Reedy’s prime with the Greyhawks. He suited up on a Grehawks defense that recorded shutout after shutout of Japanese opponents, while Reedy distributed passes to a deep corps of receivers and running backs.

“He was very in control at game time,” Price said. “He was always good for a big play, a big and strong character and made the guys believe they could do anything. I knew on defense, if we kept the other team from scoring, that offense would get it done.”

Kyle Rhodus, former Yokosuka base athletics director who also refereed games in Japan after Reedy left for his job in Hawaii, said he recalls others talking about Reedy as “being well liked and talked about a lot, especially the good old days of the Greyhawks.”