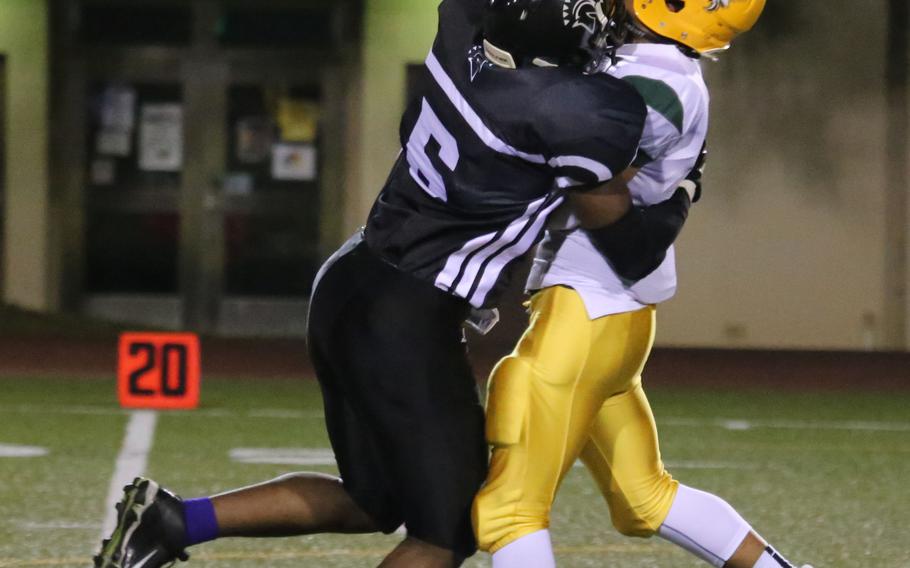 Nick Canada threw for a career-high three touchdown passes and ran for a score and DeVonte Gabriel accounted for two TDs, one through the air and the other on special teams, as Zama broke into the win column after losing its first three, 34-19 at home over Robert D. Edgren on Friday.

“Across all three phases of the game, the guys executed the way we knew they could,” Bolin said. “They trusted each other, they trusted the experience that they had built up, they were resilient and they pushed through. They did the things we always knew they could.”

Unlike the Eagles’ home 38-12 win over the Trojans to open the season on Sept. 1, Edgren played well the first half on Friday only to let down in the last two periods, coach Jeremy Sanders said, calling it a “duplicate copy” of the Eagles’ 39-21 loss at Daegu two weeks earlier.

“Just like then, we played a decent first half, but the execution faltered in the second half,” Sanders said, pointing to missed opportunities on both sides of the ball. “We couldn’t recover. And that was the difference.”

Canada tossed touchdown passes of 20 yards each to Gabriel and Troy Erwin and 4 yards to Sean Sullivan, and also ran 6 yards for a TD. Gabriel also took a kick return 80 yards for a score.

The Eagles’ three touchdowns came on the ground, two by Matt Keating and the other by quarterback Raphael Lykins. But in the second half, “we had a lot of three-and-outs and had to keep our defense on the field longer,” Sanders said.

“It now becomes, ‘do we have it in us to be a spoiler?’” Bolin said. “We don’t know. We just hope we can go out and execute the way we did tonight and see where the chips fall.”