Wrestling in Pacific: It comes down to style Alek Gomez of Kadena locks his hands around the waist of Kubasaki's Caleb Sablan at 215 pounds during an Okinawa regular-season bout last month at Kadena High School. Locking hands in offensive position is legal in international freestyle rules which govern Pacific high school wrestling, but they're prohibited (except for pin combinations) in collegiate folkstyle. (Marie Obsuna/Special to Stars and Stripes)

Alek Gomez of Kadena locks his hands around the waist of Kubasaki's Caleb Sablan at 215 pounds during an Okinawa regular-season bout last month at Kadena High School. Locking hands in offensive position is legal in international freestyle rules which govern Pacific high school wrestling, but they're prohibited (except for pin combinations) in collegiate folkstyle. (Marie Obsuna/Special to Stars and Stripes) 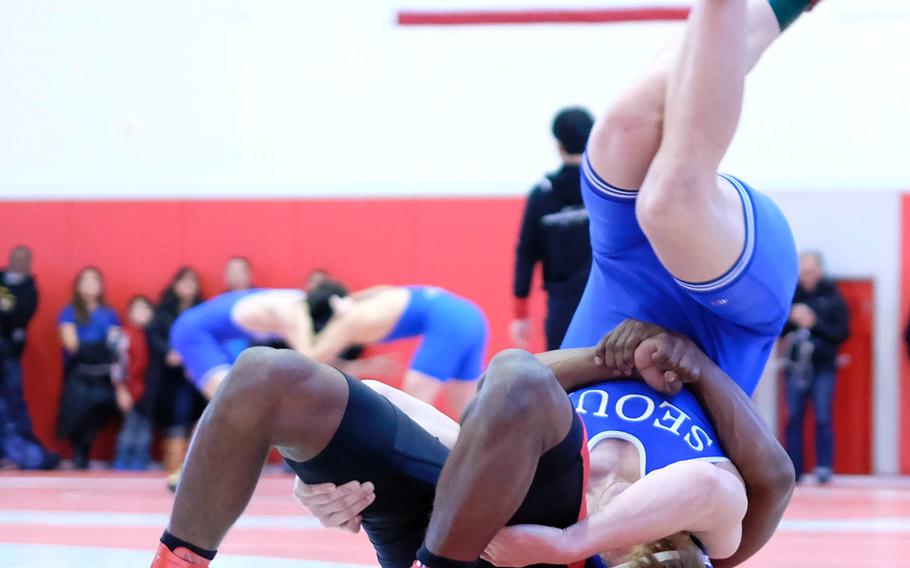 Nile C. Kinnick's Dre Paylor executes a two-hand hip toss on Seoul American's Tristan Johnson at 168 pounds during the Kinnick Invitational "Beast of the Far East" Tournament. Locking hands in an offensive position is legal in international freestyle rules which govern Pacific high school wrestling, but is prohibited in collegiate folkstyle (except for pin combinations). (James Kimber/Stars and Stripes) Daniel Lovette of Robert D. Edgren locks his hands around E.J. King's Thomas McGrath in an attempt to score a tilt during their bout in the Edgren Division II dual-meet tournament Saturday at Misawa Air Base. Such a hand lock is legal in international freestyle rules, but is prohibited in collegiate folkstyle. (Bryn Suckart/Special to Stars and Stripes)

A significant change to the way DODDS Pacific goes about its high school wrestling business could be in the cards, depending on which way athletics directors vote during a video conference slated for March.

On Tuesday, DODDS Pacific athletics coordinator Don Hobbs sent e-mail correspondence to ADs and coaches asking for input on a possible switch from the current international freestyle format to the collegiate folkstyle format favored by high schools and colleges in the States.

A vote for folkstyle would signal a fundamental change in how wrestling is officiated, coached and performed on the mats in the Pacific.

All DODDS Pacific interscholastic sports are governed by National Federation of State High School Association rules … except wrestling, for which International Federation of Associated Wrestling Styles (FILA) rules are used; those govern Olympic and world competitions.

It’s a hot-button topic that has been the subject of spirited debate between two distinct camps: DODDS Japan and Okinawa and Kanto Plain international schools, which want to stay freestyle, and Japan and Korea outlying schools, which favor a switch.

DODDS Pacific wrestling has favored freestyle over the years for two key reasons since wrestling became a Far East tournament sport in 1976:

-- Indigenous- and international-school teams that regularly compete with DODDS in Japan’s Kanto Plain and in Korea wrestle freestyle – as does the rest of the world – and are more accustomed to it.

-- The available pool of experienced referees, mostly indigenous Japanese and Koreans, are versed in FILA rules, and there were not enough NFHS-certified officials in all areas of the Pacific.

“If it isn’t broke, don’t fix it,” said Yokota coach Ty Gaume, who’s in the freestyle camp. “It’s a great opportunity to learn a different format of wrestling, since we’re stationed here in Japan and have an opportunity to see what the rest of the world does.”

Justin Edmonds, for 11 seasons the coach at reigning Far East Division II champion Robert D. Edgren, takes the opposite view, saying DODDS Pacific should be in alignment with DODDS Europe and the States.

“We should be taking care of our own,” Edmonds said. “That’s our responsibility to our kids. We’d be more consistent with rules used in the States. This is the only place where we’re wrestling freestyle. All our (other) high schools, all of our colleges wrestle collegiate.”

In the most recent vote among ADs taken last school year, the result was “even,” Hobbs said, and freestyle wrestling remained in place. Hobbs plans to gather input from coaches and ADs with another vote to be taken March 18.

Freestyle favors big-point feet-to-danger throws, while folkstyle is mostly about technique. Folkstyle wrestlers can score escape and reversal points; not so in freestyle, where exposing shoulders to mat can cost even the wrestler on top points.

Freestyle moves such as locking hands in an offensive position are illegal in folkstyle, so gut wrenches and leg laces would be out.

Coaches arguing in favor of folkstyle say that sticking with freestyle sets back wrestlers who relocate to locales where folkstyle is used.

“That’s not going to help our kids when they transfer back to the United States or Europe,” Matthew C. Perry coach Kevin Peterson said.

On the other hand, freestyle in Japan and Korea helps enrich the experience for the individual wrestler, who sees a different style, mingles with wrestlers from other lands and rounds out his game.

“Once you go beyond (college), you’re not wrestling folkstyle; you’re wrestling either freestyle or Greco-Roman,” Kadena coach Steve Schrock said. “We’re doing our wrestlers a disservice on the world stage by forcing them into folkstyle. There’s an experiential gap between us and the rest of the world.”

Referees would have to be found on bases or indigenous officials versed in freestyle rules would be asked to call folkstyle – something that the head of referees for the Kanto Plain, Takashi Noda, has steadfastly said he and his association would refuse to do.

Thus, referees among a transient American base population would have be trained every couple of years, they would ship out and others would repeat the process. “Between TDYs, deployments and augmentations … finding officials may prove difficult,” Gaume said.

“If DODDS went to the officials associations and said we need referees and can you get them certified, they’d have them certified in three months,” he said.

Should the March 18 vote go in favor of switching to folkstyle, “we’ll put out the word as far in advance as possible and everybody will have to make the switch,” Hobbs said.