Girls track Athlete of the Year 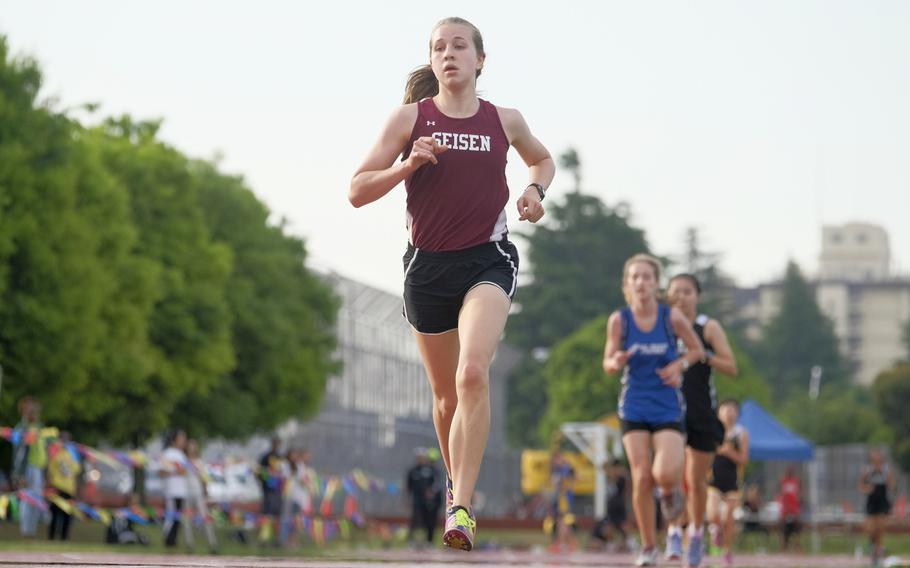 TOKYO — Long before Brittani Shappell had even begun her freshman year, cross-country and track distance coach Matt Granger said he knew he had something special in the Seisen International School distance runner.

Shappell had set Pacific track records in the 1,500 and 3,000 as far back as the sixth grade. She became the first runner in Kanto Plain history to clock the 3,305-meter Tama Hills Recreation Center cross-country course in under 13 minutes multiple times ... as a middle schooler.

“That came out of nowhere because she was coming off an injury and we didn’t have a great deal of expectation for her, and she just blasted that. Usually you see that in training first, and then it translates to the races, so that was a huge shock.”

And as it carried over to her just-completed freshman year, Shappell just kept on doing those same sorts of things, running sub-13s at Tama three more times, capturing the Kanto Plain, Asia-Pacific Invitational and Far East cross-country meet titles. Which set the stage for a spring of more feats and accolades on the track.

For her feats, Shappell has been named Stars and Stripes Pacific high school girls track and field Athlete of the Year.

Shappell said she’d set no exact goals for herself in the events she ran, “so I didn’t really know what to expect,” she said. “But based on my past races and my training, I definitely knew I’d do better. And I can do better.”

“It’s just very rare to see that in track,” Gardner said. “I try not to have any expectations because it is such a hard sport and a very honest sport. The racing is hard, the training is hard.”

Having fast runners such as Lisa Watanuki of American School In Japan and Arlene Avalos of Nile C. Kinnick pushing her helped, she said. “I had a pace I was trying to keep, but having them there also helped me to have more motivation during the race,” Shappell said.

Shappell says she feels she can get under 5 minutes in the 1,600 and around 10:50 to 10:40 in the 3,200. But she’ll be doing it elsewhere next school year; her father, Mike, a teacher at Seisen, is taking a job in Israel. “She will be missed,” Seisen athletics director Elizabeth Jury said.