Baseball Athlete of the Year 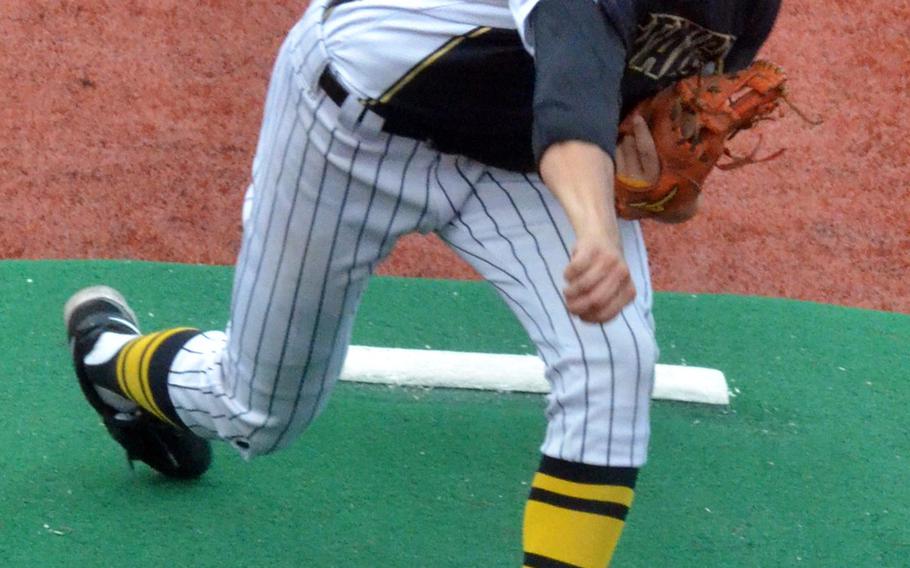 TOKYO – For a team used to success on the diamond, 2015 was shaping up to be a bit of a disappointment for the American School in Japan.

The Mustangs, who lost five seniors from last year’s Kanto Plain and Far East championship squad, were dropping games they were used to winning. ASIJ lost regular-season games on an Okinawa road trip to Kadena, and fell to Yokota. Then, for the first time in 11 years, they were beaten by Zama in an 8-4 loss during the Kanto tournament semifinals in 2004.

Something needed to change.

A Mustang who did special things both on the mound and at the plate, junior Tyler Sapsford, stepped up to lead the charge.

The result was a most unexpected repeat Far East D-I championship … except maybe to Sapsford and the Mustangs themselves.

“I never had anything in my mind other than winning the tournament, and I’m sure the team felt that way as well,” said Sapsford, who pitched and batted the Mustangs to a 12-2 win May 23 in the D-I title game over surprise finalist Kubasaki.

Along with tournament MVP honors, Sapsford has been named Stars and Stripes Pacific baseball Athlete of the Year.

Consider his numbers, all of which led the team:

“He had a heckuva year, no doubt about it,” coach John Seevers said.

The Mustangs had quite a few holes to plug coming into the season, and were forced to making changes on the fly.

“We had to play the cards that we had, we had some getting used to doing, we had some adjusting to do,” Sapsford said.

The two losses at Kadena, Sapsford said, were the wake-up call the team needed. “We were working hard in the weight room and on the field just to get redemption for that,” he said.

Still, it seemed a formality that if ASIJ, which entered last month’s Far East D-I Tournament at 13-7, would even get to the finals, they would end up facing pre-tournament favorite Kadena again.

Instead, Kubasaki’s Alex Eisenberg’s three-run, two-out home run off Panthers ace righty Justin Sego turned the semifinal – and the tournament – on its ear May 22.

The next day, Sapsford went the distance, struck out 13 and allowed just two unearned runs in the final.

Sapsford is anything but a seasonal player, also playing club ball for Japanese teams out in town – upward of 50 to 60 games per summer, he said.

“That takes a big commitment, takes a lot of time,” Seevers said. “We’ve had a lot of players over the years who have made those kind of commitments.”

Sapsford, who has committed to Yale, will return to ASIJ for his senior season.

“Not a bad deal,” Seevers said.

Asked if he’s ready for the challenge of a Far East D-I three-peat, Sapsford simply said: “Of course.”