Red Devil wrestlers pick up where they left off 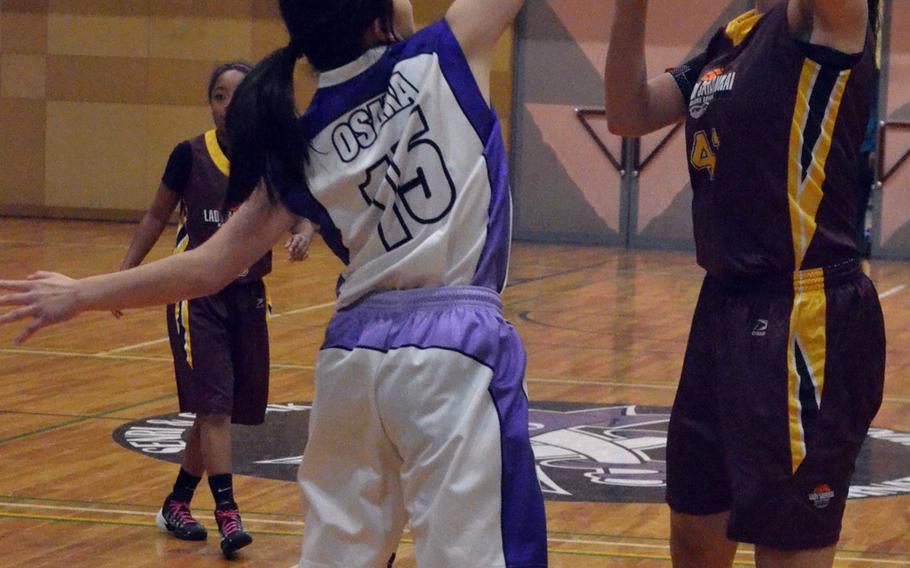 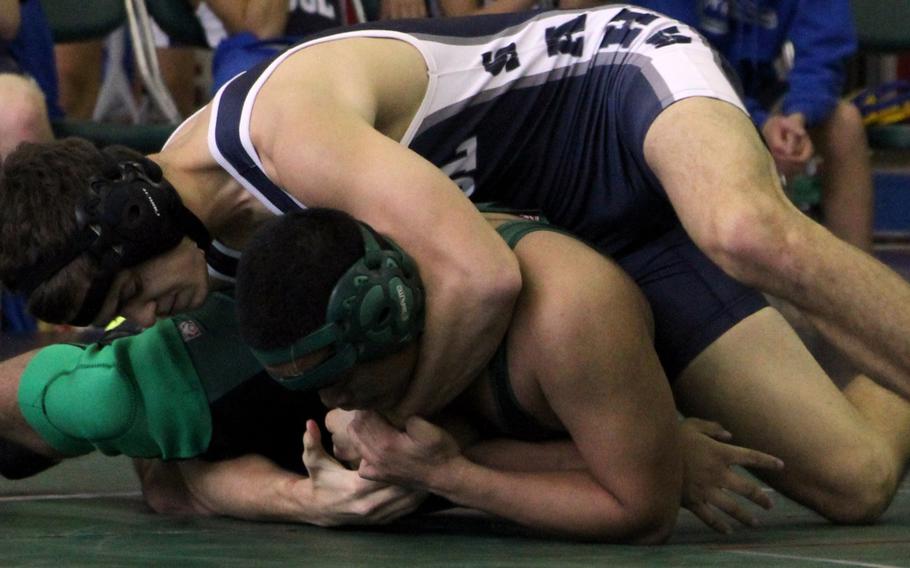 Seoul American's Jarek Bartel gains the upper hand on Daegu's John Michael Medalla at 158 pounds. Bartel won by pin in 2 minutes, 20 seconds and the Falcons won the dual meet 39-15 over the Warriors. (Sarah Spavins/Special to Stars and Stripes) 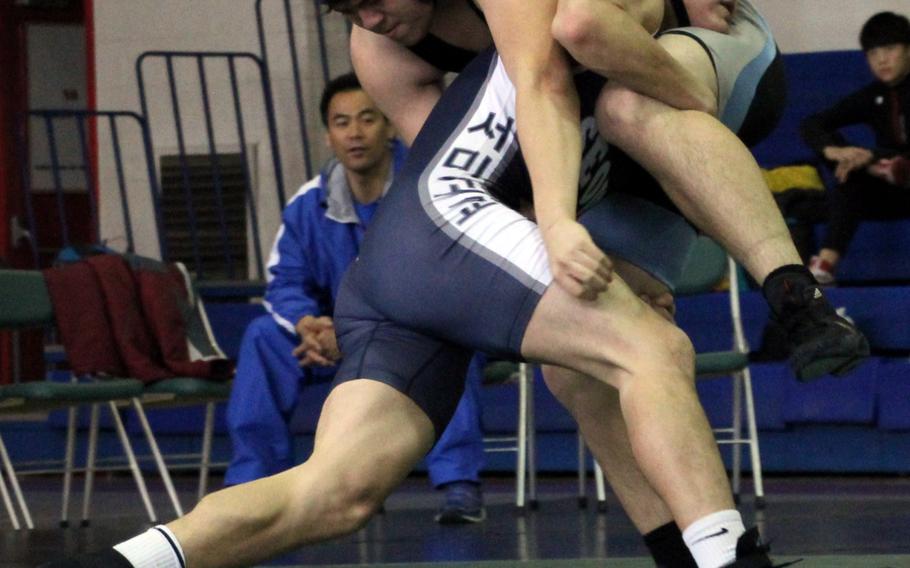 Seoul American's Brandon Rothe gets the upper hand on Osan's Eugene Williamson en route to a technical-fall victory at 215 pounds. Rothe, a Far East tournament runner-up last year, won 10-0 and the Falcons won the dual meet 44-11 over the Cougars. (Sarah Spavins/Special to Stars and Stripes) MISAWA AIR BASE, Japan – Sleep can be pretty hard to come by, given how the conversation between athletes rarely ceases, on those long bus rides north from Tokyo to Misawa for the season-opening Robert D. Edgren Invitational wrestling meet.

Such was not the case, coach Gary Wilson said, on the way home from the Edgren tournament on Saturday afternoon – exhaustion permeated his entire Nile C. Kinnick squad after the Red Devils won five dual meets, then settled in, quiet as churchmice, for the ride home.

“My kids are worn out,” Wilson said. “Not one person talking.”

That’s the team the Red Devils beat the last two years for the Far East dual-meet crown, though on Saturday the Titans were without five of their regulars.

“They got a feel of the process, how the pieces of the puzzle fit together,” Wilson said. “It was good team building for us.”

Though the Red Devils beat their D-II foes by wide margins, Wilson said he liked what he saw in host Edgren and up-and-coming rival Yokota, which upset the Eagles 32-30 to highlight the day.

“Yokota is much improved over the last couple of years,” Wilson said. “Edgren has some really strong wrestlers. St. Mary’s had some excellent backups, it was a chance to give them some reps. There was a lot of good individual wrestling.”

Edgren’s Jackson Edmonds had one of the strongest days by an individual, scoring five wins by pin.

Korea’s dual-meet season also got under way at Camp George, where Seoul American outmanned Osan and host Daegu. Korea’s smaller schools did field larger lineups than they have the past two years, and Warriors first-year coach Blake Sims felt his squad did well.

Seoul “looked strong, they filled every weight class and had a lot of talent, so they’ll be strong all season,” Sims said.

But his Warriors also fired some warning salvos thanks to middleweights Jake Dexter, John Michael Medalla and former Seoul American wrestler Hunter Lane, who transferred to Daegu. “They’ll be a strong part of the team,” Sims said.

The first full weekend of basketball in the Pacific saw one man leave the court Saturday as hoarse as he’s been in a while, and with something of a headache. But Steve Boyd could be forgiven, as he returned after a year away from Seoul American’s boys basketball helm.

His Falcons won their opener 56-30 on Friday at Taejon Christian, then won their home opener 55-42 against Seoul Foreign. Jez Harper averaged 13.5 points in the two games.

Jabari Johnson averaged 15.5 points in two games and Josiah Ferguson erupted for 31 points Saturday as Kinnick – which won six total games the last two seasons – got a third of that total in just one weekend, sweeping Edgren 64-59 and 80-51.

“These couple of years, the guys just got tired” of losing as much as they had, coach Robert Stovall said. “They’re playing really well together, but we have a lot of things to fix.”

This one was no different; the Cobras, behind newcomer brothers Devin and Dyson Robinson and Chad and Chris Hinmon, beat Senri Osaka 57-33, Matthew C. Perry 62-41 and Canadian Academy 50-41.

“We’ve had some luck here,” coach Scott Jarrard said. The Cobras made that run without senior point guard Rikki Kendall, who was left behind to take the SAT. “They played hard. We’re a more athletic group than we had last year.”

Perry’s girls, behind senior Naomi Ziola (14.8 points) and junior Lebet Erhart (6.8 rebounds), swept their four games in the Saber Invitational, doubling their win total in the same event a season ago.

On the opposite end of the coin, Daegu girls basketball endured a nightmarish first weekend, capped by a 45-3 loss Saturday at TCIS. But Friday’s opener was worse – a 60-0 loss to Seoul Foreign at home.

The problem: The Warriors entered the season with just four sophomores and three freshmen, with precious little experience. “We took it on the chin like we knew we would,” first-year coach George Riley said.

Defending boys Division II champion Yokota suffered its first regular-season loss since 2014, fading in the end against Division I American School In Japan 66-58. “They got us in the end, out of gas a little,” new coach Dan Galvin said. “We’ll get in better shape.”