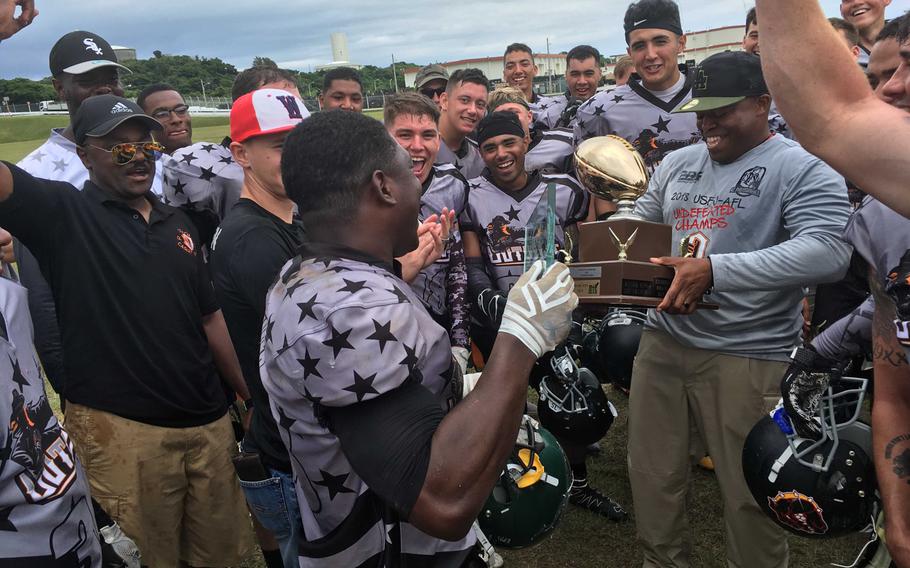 “It’s been a long time coming,” Outlaws coach Dean McCown Sr. said. “We are all very happy about this.”

Hansen entered the league in 2010, combining with soldiers from Torii Station to form the Joint Task Force Wolfpack. They became the Hansen Wolfpack in 2012, then the Outlaws last season. Last June 9, Hansen lost in its first Torii Bowl appearance 26-0 to the Okinawa Dragons.

Against Ryudai, the Outlaws prevailed but not with the ease they did against the Stingray in their two regular-season meetings. Hansen blanked Ryudai 32-0 in the season opener on March 24, then routed the Stingray 40-8 in the regular-season finale on May 5.

The Stingray “didn’t quit and we knew they wouldn’t,” McCown said, adding that the Outlaws were mindful all game long of the Stingray’s 32-14 semifinal upset a week earlier of the defending champion Dragons.

“This was a barnburner. It went back and forth. Every time we tried to pull away, they kept fighting back. They kept us on their toes and made sure that no matter what, we would have to keep on pushing.”

In fact, the Stingray got on the board first. Quarterback Kenta Ogasawara threw a 3-yard touchdown pass to player-coach Riichiro Shinjo to make it 6-0 Ryudai with 4:44 left in the first quarter. Kazuki Nakashima set up the touchdown with a fumble recovery.

Hansen responded in kind, converting a Lugo fumble recovery into a 4-yard TD run by Ingram that tied it 1:27 into the second period.

Aaren Preston intercepted Ogasawara on Ryudai’s next possession, then Ingram threw 19 yards to Fuller to put the Outlaws ahead to stay. Taylor Bolzer’s 2-point conversion run made it 14-6.

“He stepped up and did what he needed to do both last week and this week,” McCown said of Fuller, who had been gone most of the season due to military commitments.

Against the Dragons, Fuller caught two touchdown passes and ran back a kick for a TD, giving him five scores in the 2018 postseason.

Ryudai answered promptly after Fuller’s second touchdown catch, cutting it to 20-14 on Ogasawara’s 4-yard scoring pass to Yoshiki Shirota and a 2-point pass to Taichi Anpo 50 seconds before half.

Hansen went no huddle on the next drive, with Ingram completing three passes for 80 yards, capped by a 34-yarder for a touchdown to Nick Jackson with 19 seconds left in the second period.

It remained 26-14 Hansen through three quarters, then Gregory barreled 6 yards for the first of his two rushing touchdowns, increasing the Outlaws’ lead to 32-14 with 8:29 left.

Still, the Stingray didn’t quit. Two plays later, Ogasawara tossed 58 yards to a wide-open Anpo for a touchdown, then hit Shinjo for two points and Ryudai found itself within 10 points, 32-22, with 7:30 left.

The teams traded possessions, then Gregory sealed it with a 48-yard scoring run and a 2-point conversion run, capping the scoring with 1:19 left. Ryudai fumbled the ensuing kickoff with the Outlaws’ Morgan Grant recovering at the Stingray 41, and Hansen ran out the clock.

Ingram and backup Derrian Burton combined to go 15-for-20 for 281 yards and three TDs, while Gregory had 67 yards on 11 carries and Tim Rupnicki 73 yards on 14 tries for a Hansen offense that generated 462 yards on 59 plays. Fuller had a team-high 89 yards on three catches.

Walker recorded 2½ sacks and a forced fumble, while Lugo and Joseph Hollier each had a sack and a fumble recovery. The Outlaws forced four turnovers and recorded five sacks and held the Stingray to 128 yards on 52 plays, including minus-48 yards on 19 rushes with no first downs.

Walker had gotten hurt in last year’s Torii Bowl, and “for him to do what he did today was simply amazing,” McCown said.

Lugo took over for departed defensive captain Joshua MacGibbon, who transferred stateside before the Torii Bowl. “He did what he needed to do,” McCown said of Lugo. “He came up big when we needed it the most.”