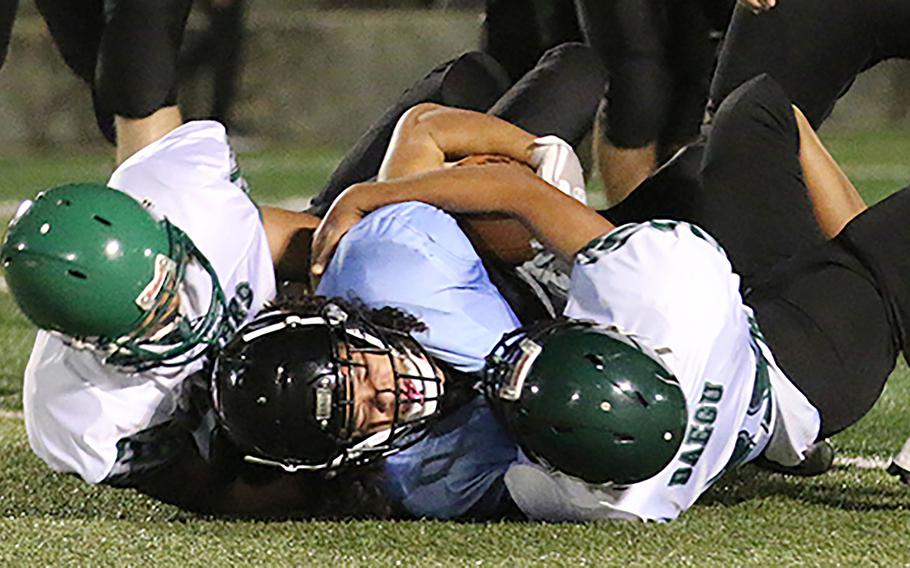 Daegu's Princeton Newbold looks for somebody to throw to against Osan. (Jessica McCollum/Special to Stripes)

OSAN AIR BASE, South Korea – After two consecutive losses, Osan’s offense rediscovered its mojo, spreading the scoring wealth around in a 50-27 win over Daegu on Friday.

With the win, the Cougars improved to 3-2 overall and in Division II, and garnered a season-series sweep of the Warriors (1-5, 0-5). Osan beat Daegu 56-6 in the season opener for both teams on Sept. 13 at Camp Walker’s Kelly Field in Daegu.

“Our key back played really well and we spread the ball around a bit,” Cougars coach Jerome Learman said, adding that the Warriors were “vastly improved” since the last time Osan saw them.

“They’re well organized,” Learman said. “They made some good offensive plays, but our offense responded every time.”

Daegu’s William Hamilton ran 25 yards for a touchdown and DeQuandre Moore added a 3-yard scoring run and Princeton Newbold a 7-yarder. Nikolai Champaco returned a fumble 55 yards for a TD. Daegu scored a safety when Osan snapped a ball out of the end zone.

“We still have a long way to go,” Daegu coach Blake Sims said, “but we’ve made a lot of progress. Little things are paying off. A lot more things are starting to come together.”

Daegu concludes its season next Saturday at 5 p.m. against Robert D. Edgren. Osan hosts Yokota to end its season at 7 p.m. Friday.