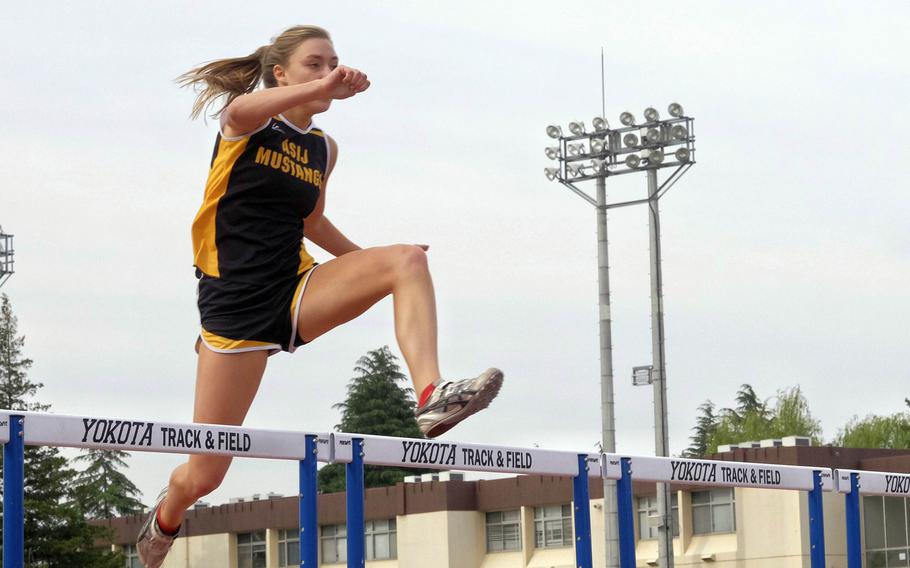 ASIJ's Jenna Doyno runs the 300 hurdles in a Pacific-record 46.61 on May 22, 2015 during the Far East Track and Field Tournament at Yokota Air Base, Japan. (James Kimber/Stars and Stripes)

ASIJ's Jenna Doyno runs the 300 hurdles in a Pacific-record 46.61 on May 22, 2015 during the Far East Track and Field Tournament at Yokota Air Base, Japan. (James Kimber/Stars and Stripes) 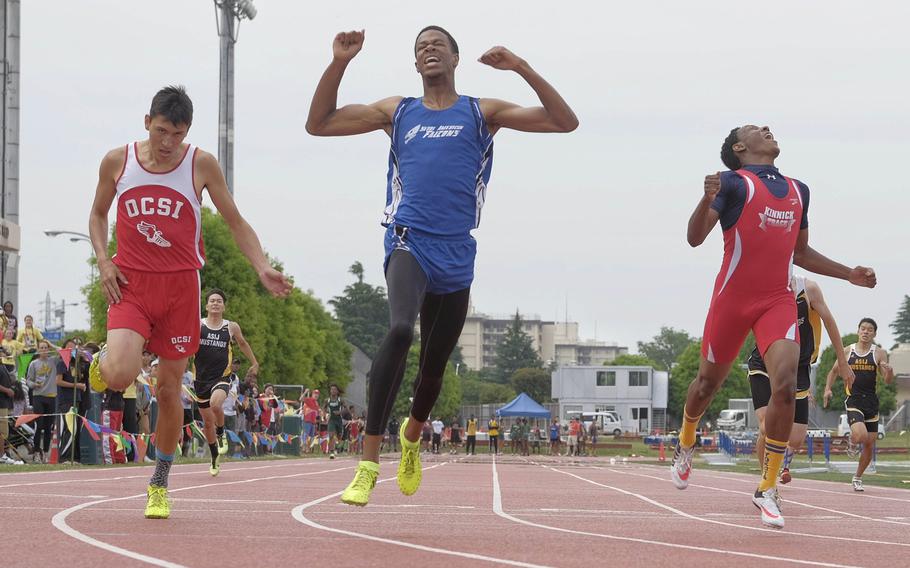 The thrill of victory and the agony of defeat. Seoul American's Shawn Horne exults as Okinawa Christian's Shawn Monroe and Nile C. Kinnick's Pacific record-holder Jabari Johnson hit the finish in the 400. The three finished .10 seconds apart and Horne set the meet record with a time of 49.06 seconds. (James Kimber/Stars and Stripes) 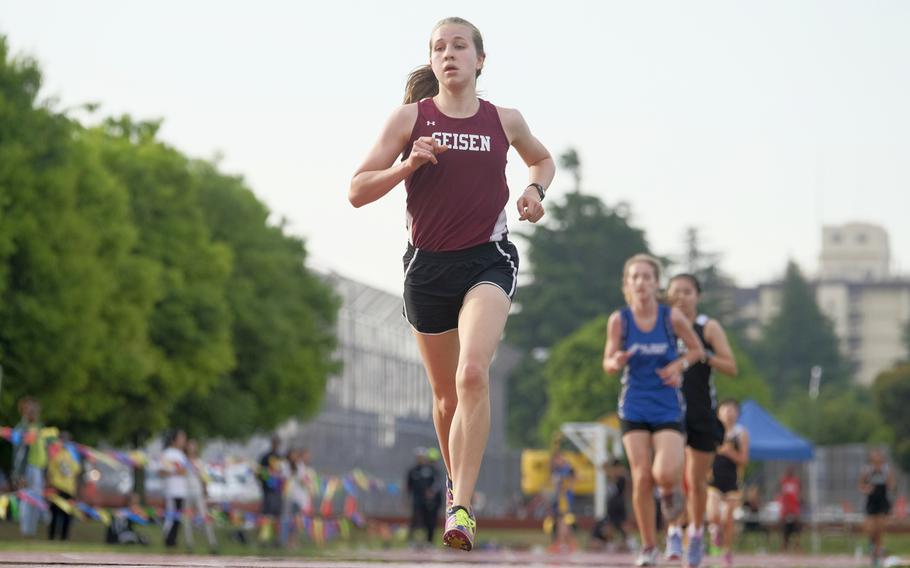 Seisen's Brittani Shappell broke the Pacific and Far East Tournament records in the 3200-meter run May 22, 2015 at Yokota Air Base, Japan. Shappell's 11 minutes, 4.56 seconds time broke her own record of 11:12.36 set earlier this year. (James Kimber/Stars and Stripes)

YOKOTA AIR BASE, Japan – Coming out of the final turn, Shawn Horne said he sensed his bid to win the race Friday was in major jeopardy.

The lanky Seoul American senior stood fourth as he headed down the home stretch of the 400-meter run on Day 2 of the Far East track and field meet. But he found another gear – and not only beat Pacific record-holder Jabari Johnson of Nile C. Kinnick to the tape; he broke the meet record Johnson had set a day earlier.

“Ooh. Great,” Horne said when informed of his record 49.06 run, topping Johnson’s 49.27 in Thursday’s preliminaries. “When I came off the curve and I was fourth, I went all out to get them. I had to to get the win.”

In what had all the trappings of a photo finish, Horne edged Johnson by .07 seconds and Okinawa Christian’s Shawn Monroe by .10, meaning all three had beaten Johnson’s mark the day before.

In the chase for team titles, Kinnick won the girls and overall Division I banners, while American School In Japan captured the boys title. Zama won its second straight overall Division II banner and Yokota’s boys and Zama’s girls won their respective banners. It meant a fourth D-II title for Yokota this week and seventh in 10 available since becoming a small school on Nov. 18.

ASIJ’s Jenna Doyno set one of the two Pacific marks, rallying past Kadena’s Apryl-Len Cabase to win the 300 hurdles in 46.61 seconds, topping the 46.97 set by Guam High’s Stefani Loisel four years ago. And it came after Doyno got off to a bad start.

“I took a step backward when I started,” the senior Mustang said. “I didn’t expect this. This is great. It was so scary running. Apryl-Len is such a good runner.”

The other Pacific record came in the final race in a Seisen uniform for freshman Brittani Shappell. She broke her own region record in the 3,200, clocking 11 minutes, 4.56 seconds; she’d run 11:12.36 in the May 9 Kanto finals.

“I’ve seen good things in her training, so I’m not as surprised as I was,” said Seisen distance coach Matt Granger, who on previous occasions admitted that he was amazed at the things Shappell was doing, especially coming off an injury that limited her training before the season.

“She’s a great runner,” Cabase said of Edwards, adding that with her teammate pushing her, she was going all out. “That finish line looked so pleasing.”

Another athlete beating his own Far East meet record was Seoul American senior David Davison. His shot put of 15.11 meters demolished his old mark of 13.59 set last year. He confessed to nerves before each meet the last two years, but said nerves benefitted him Friday.

“Last year, I let it hinder me,” he said. “This time, I put that nervousness into what I was doing. I used it to fuel my throwing.”

And as the meet began with Yokota’s Christian Sonnenberg setting a record in one of the meet’s first events, so the Far East ended with a meet record in the final event, the boys 1,600 relay. ASIJ ran 3:25.45, besting the 3:29.22 run last year by Seoul American.

“When I looked at these guys, I knew we were going to kill the record,” Mustang senior Ken Baburek said. “It’s all about these guys.”

The win – Kubasaki’s first in five tries against the Okinawa foe Kadena – put the Dragons into Saturday’s D-I championship, their third appearance in six years, against defending champion American School In Japan, which beat host Nile C. Kinnick 14-3 in the other semifinal.