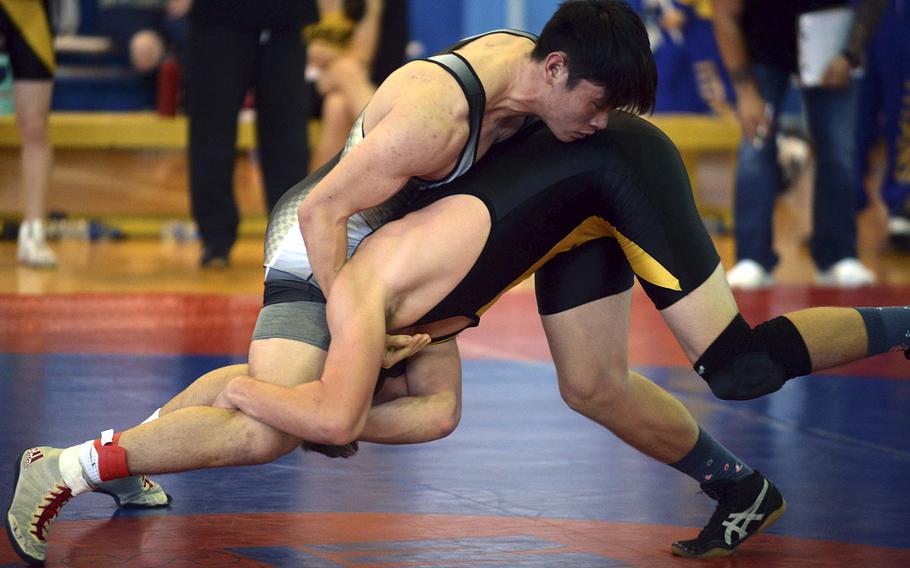 Buy Photo
Humphreys' James Ahn gets the upper hand on Kadena's Joey Puterbaugh at 168 pounds during Saturday's 7th Rumble on the Rock wrestling tournament. Ahn won by pin. Neither finished in the top three. (Dave Ornauer/Stars and Stripes)

Buy Photo
Humphreys' James Ahn gets the upper hand on Kadena's Joey Puterbaugh at 168 pounds during Saturday's 7th Rumble on the Rock wrestling tournament. Ahn won by pin. Neither finished in the top three. (Dave Ornauer/Stars and Stripes) Buy Photo
Kubasaki's Colin Nation does a back toss on Humphreys' Dennis Hernandez in the 180-pound final of the 7th Rumble on the Rock wrestling tournament. Nation won by technical fall 10-0 in 35 seconds and was voted the tournament's Outstanding Wrestler. (Dave Ornauer/Stars and Stripes) 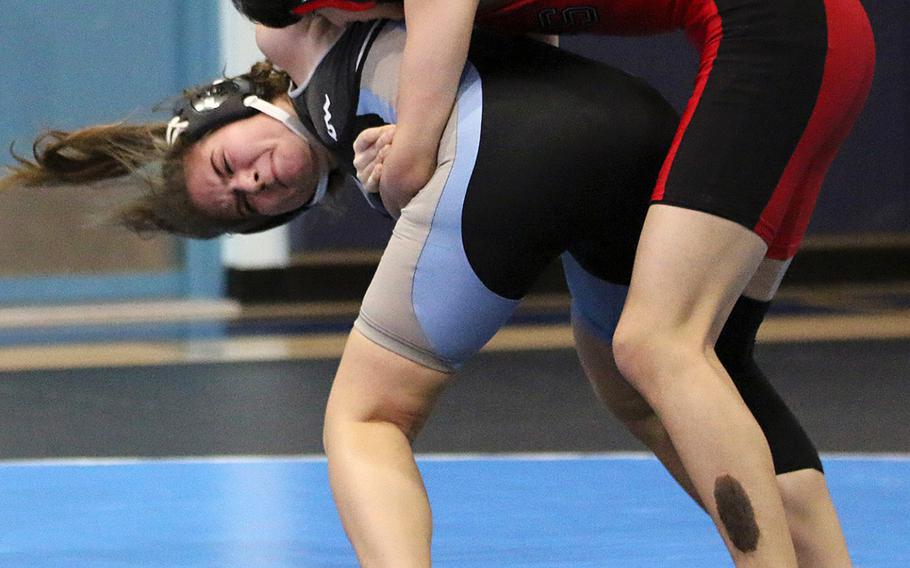 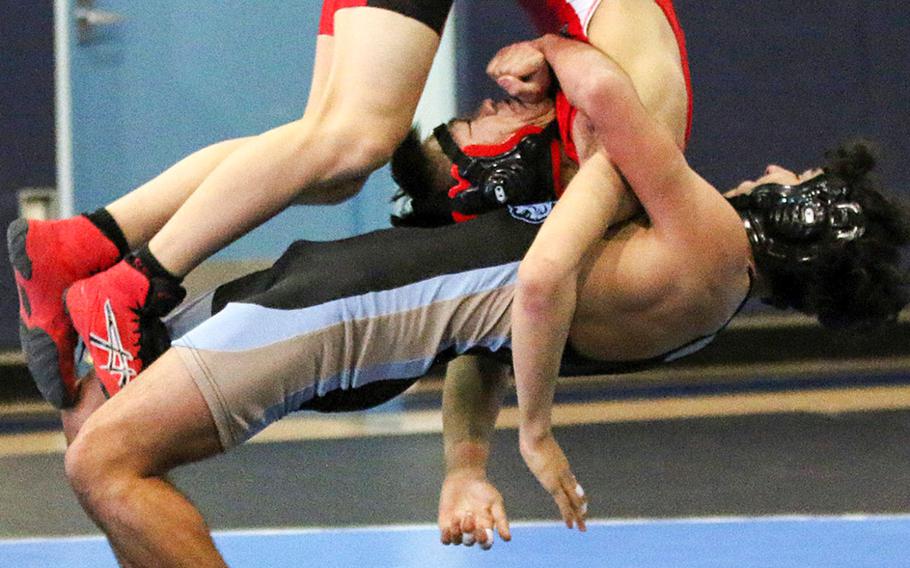 Osan's Zathain Soto does a back toss on Seoul Foreign's Max Nam at 129 pounds during Saturday's Korea wrestling tri-meet. Soto pinned Nam and the Cougars edged the Crusaders 29-26. (Jessica McCollum/Special to Stripes) 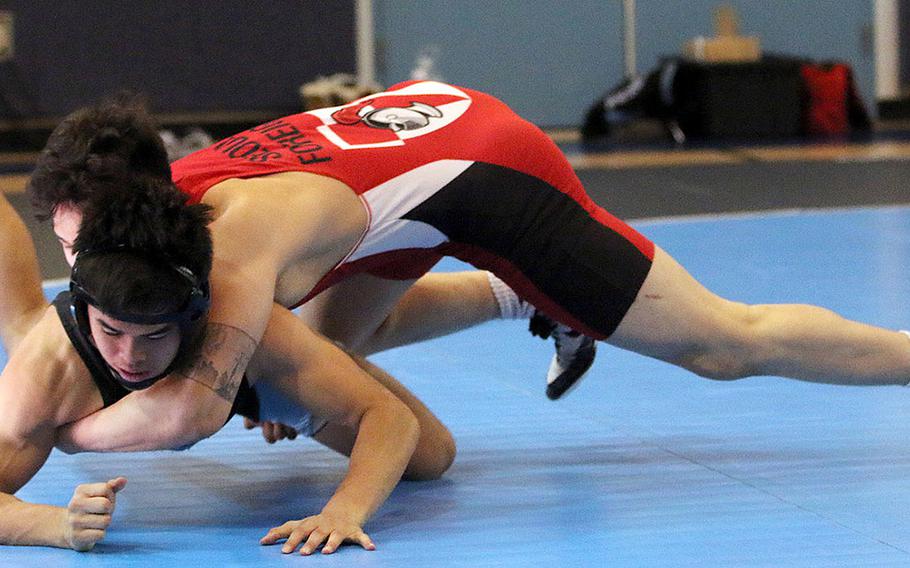 Seoul Foreign's Brian Choe, a former Seoul American wrestler, gets the edge on Osan's defending Far East champion Marcus Inthavixay at 180 pounds during Saturday's tri-meet at Osan. Choe won 4-0 in his last bout before transferring to the States. (Jessica McCollum/Special to Stripes)

MARINE CORPS AIR STATION FUTENMA, Okinawa – The new wrestler from Florida proved to be as solid as his pedigree and reputation.

Colin Nation, a Kubasaki junior transfer from Tampa Prep - where he won the state championship - won all three of his bouts by technical fall en route to the 180-pound title in the Rumble on the Rock tournament, which returned to the Okinawa mats after a seven-year absence. He was voted Outstanding Wrestler.

“I was hoping the competition would be a little higher,” Nation said after putting away three opponents with a dazzling display of lifts, carries and suplex throws. He put away Dennis Martinez of Humphreys by technical fall 10-0 in 35 seconds for the weight-class crown.

Despite his performance, Nation said he needed to better his game. “Setups, for takedowns (and) shots,” he said. “At least for the throws on my feet, I need to put my hips into it more. Rely less on strength and more on technique.”

Rumble came back to the mats for the first time since February 2013, and featured Kubasaki and Kadena, Humphreys from South Korea, St. Mary’s out of Tokyo and some wrestlers from Japanese schools, seven of whom won their weights.

“We’re seeing our strengths and we’re seeing what we need to work on,” Kubasaki coach and tournament director Brent Cook said. “I’m so glad we got this opportunity.”

One of the bigger Rumble surprises came at 101 pounds, where sophomore Mizuki Sato-Marsh won all three of her bouts, including a pin over Kubasaki’s Collin Inthisone in 2:26.

“Even if you win, you still have to get better,” Sato-Marsh said, adding that she feels she needs to work on making better shots.

Rumble also featured its share of comeback victories, including Austin Carpenter, who trailed Axel Shepherd in the 122-pound final before rallying for a pin in 2:49.

“I noticed something wasn’t working in the beginning, so I tried something different and it worked,” Carpenter said.

Osan gamble pays off, but barelyOSAN AIR BASE, South Korea – With defending league champion Humphreys not around, Osan won both of its dual meets in a Korea tri-meet at Osan, but not without a major scare at 180 pounds.

He won a 4-0 decision over Cougars junior Marcus Inthavixay, a reigning Far East champion, who moved up from 158 to 180 just to wrestle Choe. The Cougars escaped with a 29-26 win over the Crusaders.

“We rolled the dice and it almost cost us,” Cougars coach Andrew Grant said.

The Samurai won three of their four dual meets and almost pulled an upset over the Red Devils, losing by just 29-25. “One more match would have done it,” Perry coach Chris Munsell said. “We are getting better.”

The Warriors’ big worry at season’s beginning was how to overcome the loss of Turner, their big presence in the paint the last two seasons. But sophomore Jya Van, coach Jonathan Van’s daughter, has filled in well, averaging eight points and 13 rebounds in five games, all wins.

On the boys side, Humphreys’ stayed unbeaten at 5-0, also with two weekend wins. Junior Gregory led the way in a 66-24 win at Osan and a 49-27 win over Yongsan; Gregory averaged 18 points in the two games.