Kubasaki bounces back from first loss to top St. Mary's 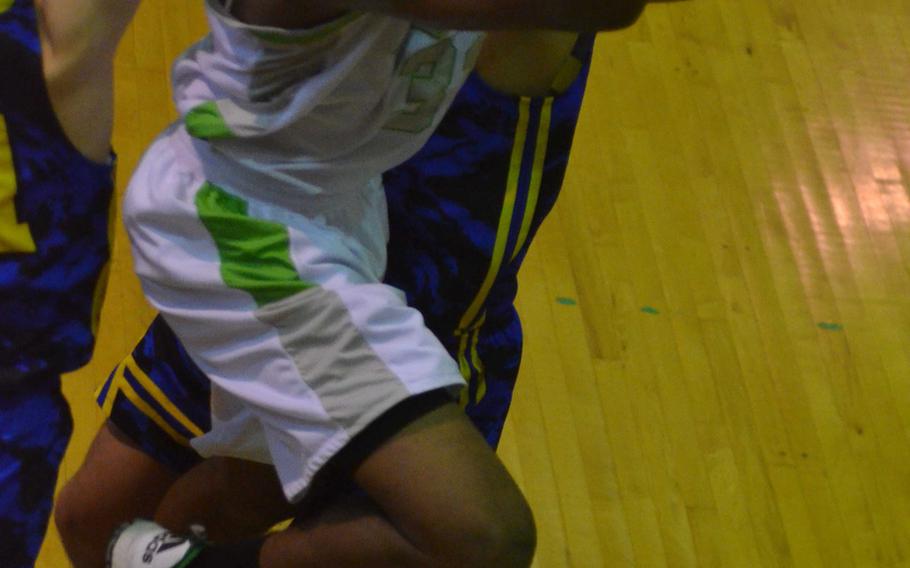 TOKYO – A month-long grind of 14 games in four weekends, played at locations as diverse as Taipei, Okinawa and Tokyo, ended Saturday for Kubasaki boys basketball as they won 60-53 against St. Mary’s.

But the 70-63 victory was closer than the score indicated, and Dragons coach Jon Fick said the Titans could be a force to be reckoned with come the Far East Division I Tournament next month on Okinawa.

“They’re a good team,” Fick said after guard Jacob Green made two key steals and hit three clutch free throws to keep St. Mary’s at arm’s length down the stretch. “They absolutely know what they’re doing on defense. They have some good players. They’re going to be tough in February.”

Following Kubasaki’s first loss of the season Friday 76-68 at American School In Japan, the Dragons fell behind in the early stages as the Titans pulled ahead 13-4.

But Kubasaki scored 10 straight and the lead swayed back and forth. A Matt Ashley lay-in with 40 seconds left in the third quarter gave the Dragons their biggest lead, 30-22, but the Titans got within two points three times in the late minutes before the Dragons hung on.

Ashley led the Dragons with 19 points and 11 rebounds and Isaiah Johnson added 12. Thomas Wood of St. Mary’s led all scorers with 29.

It was the capper to a “tough stretch,” Fick said, of the 14-game stretch in January, and left him saying the Dragons need improvement before defending their Far East championship.

“A lot of good games against a lot of good teams,” Fick said. “We still need to get better. We’re not a very good rebounding team. We lose focus at times. We tend to rely on our athletes instead of relying on fundamental play.”

Kubasaki also beat defending Far East Division II champion Yokota 70-62 at ASIJ on Friday. Saturday’s game with St. Mary’s was originally scheduled at ASIJ, but with the threat of snow overnight, the game was moved to Seisen in southwest Tokyo. St. Mary’s was hosting a middle-school wrestling tournament Saturday.

Kadena girls avenge blowout lossesKadena’s girls had lost by 66 and 32 points earlier this season to Futenma and Nishihara, two Japanese teams. Over the weekend, the Panthers repaid the favor but in high-wire fashion, edging Futenma 61-59 on Friday and Nishihara 71-70 on Saturday.

Kadena led by as many as 19 Friday and 23 Saturday before their two foes rallied behind defensive pressure and long-distance shooting. “They fire from deep, they get good ball movement, they’ll catch you sleeping and pow,” coach Willie Ware said. “It feels good to play better ball late in the season and close games out.”

Tiarrah Edwards, coming off an ankle sprain, had her two best games of the season, 29 points and 18 rebounds against Nishihara and 19 boards against Futenma.

The Titans scored 119 team points to 109 for the Red Devils in the final tune-up before next Saturday’s Kanto Plain finals, to be hosted by St. Mary’s. The Titans have won three of four individual tournament titles and Kinnick both dual-meet tournaments plus an individual team title this season.

The tournament was conducted in a blind-draw format and one of the early bouts saw Kinnick’s Jianni Labato taking on two-time Far East champion Chang Young Lee of St. Mary’s at 122 pounds. Labato led 5-2 early, but Lee caught and pinned Labato.