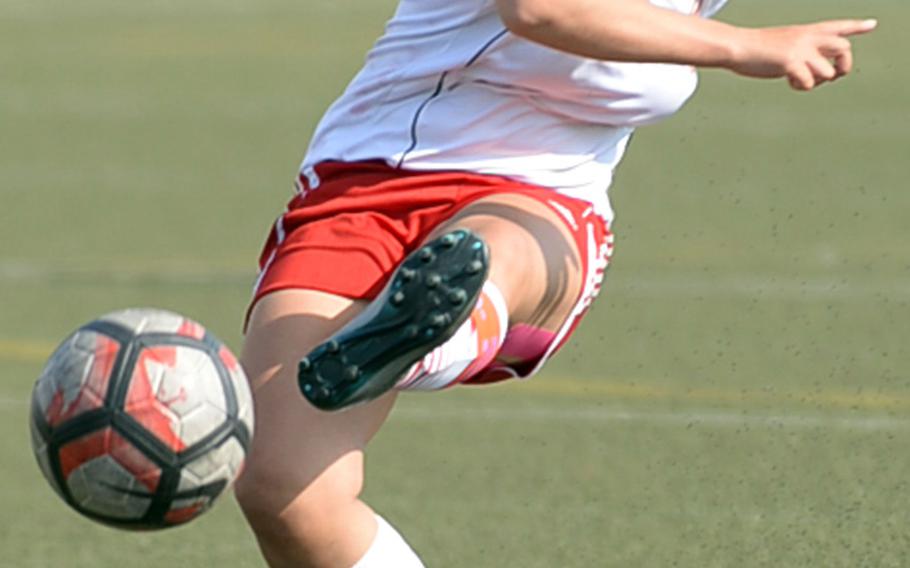 YOKOSUKA NAVAL BASE, Japan -- They were making school history early in the season – just not the sort of history Kiralyn Kawachi and her Kinnick girls soccer team were hoping to make.

There were school-first losses to Sacred Heart, and E.J. King early in the season, and for the first time in 14 seasons under coach Nico Hindie, Kinnick started a season 0-4-1.

“Nobody thought we could actually contend,” Hindie said. He and his staff “thought we had a good team,” but the Red Devils had to overcome losing Athena Peerson, Frances Campbell and Sienna Ochoa to graduation and transfer. “That really affected us.”

“I was very sad,” said Kawachi, the Devils’ senior captain who entered the season having finished second the past two years in the Far East Division I Tournament. “Each and every girl wanted to win Far East.”

Fast forward to May 18, again at Kinnick’s home Berkey Field, where Kawachi scored twice in the first half and the Red Devils shut out American School In Japan 3-0 in the Far East D-I final.

It was Kinnick’s first D-I title and capped a 14-2-2 run after the Devils’ dismal start. And it also netted Kawachi the tournament’s Golden Boot award, her second All-Tournament selection and Stars and Stripes Pacific girls soccer Player of the Year honors.

Kawachi had tough comeptition for the award.

Kinnick’s turnaround was largely due to Kawachi “putting the team on her back,” Hindie said.

“We have a motto of one team, one dream, and she was instrumental in getting everybody to buy into that” Hindie said. “She rallied the troops. She knew what needed to be done and got everybody on board.”

The week after the loss to King, Kinnick finished third in the DODEA-Japan tournament, going 5-1 and outscoring opponents 19-4.

“We came together and got the feeling of winning and working together,” Kawachi said. “Even if we didn’t win DODDS, we knew we could win Far East, and that’s what happened.”

The D-I title came after a rough start, a 1-0 loss to Kadena and a 1-1 draw with three-time defending champion Kubasaki. “We realized we were in contention, we were in a battle and if we played well, we could win the whole thing.”

In the D-I final, Kawachi wasted little time, scoring in the 12th minute off an entry pass from the left side by Ella Eisenhardt. A second goal followed and the Devils were on their way.

“It made the girls realize that we needed to keep pushing for this win and it didn’t stop,” Kawachi said.

For her career, Kawachi finishes with 91 goals and 54 assists, including 27 and 11 in her final season.

Having come up short in the two previous trips to the final “and especially being a game or a goal or two away, then finally winning makes my senior year complete,” Kawachi said. “The time and hard work got us to where we are today.”