Karasawa wraps up tourney that was all Mustangs 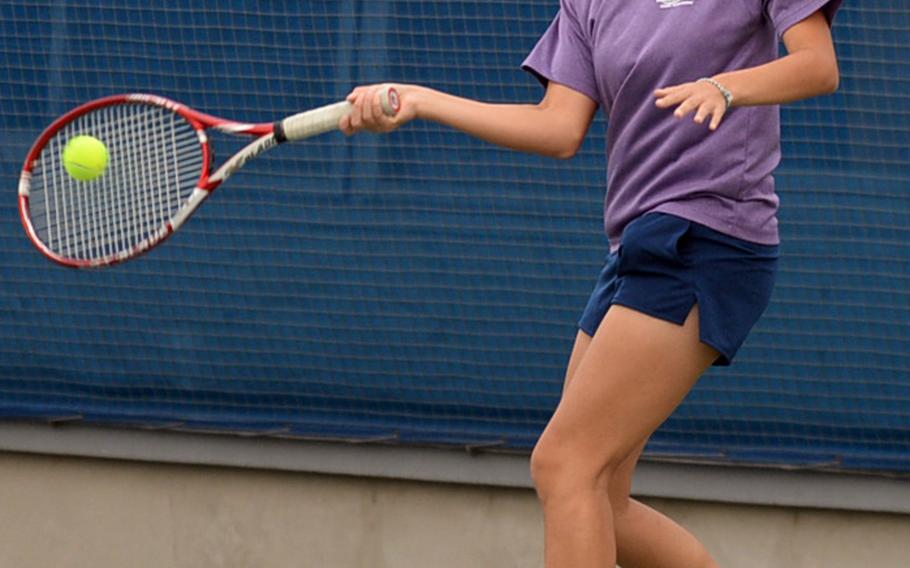 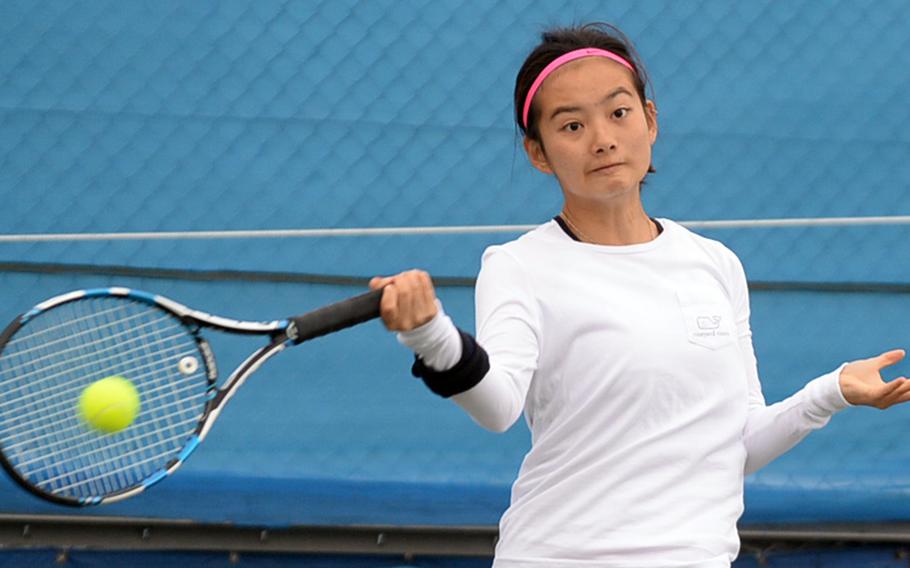 Karasawa, an American School In Japan senior, rallied from behind 3-4 in the third set of the final, breaking junior teammate Eriya Hara’s serve in the eighth and the 10th and last game and beating Hara 3-6, 6-1, 6-4, about an hour past dawn Saturday at Mustang Valley.

Far East had begun on Oct. 25 at Kadena, but oncoming Typhoon Saola forced organizers to truncate the four-day tournament into two days. The boys and girls singles and mixed doubles – each with ASIJ players pitted against each other – were postponed and moved to Mustang Valley.

Saturday’s three games completed a match that began the day before and stretched a little more than two hours, as each player camped on the baseline and hit long groundstrokes that became long rallies.

Finally, with Hara up one game and darkness fast approaching, Mustangs coach Jen Brown called a halt to play.

“It was so dark,” Karasawa said. “At 3-3, I couldn’t see anything. I was putting my hand over my eyes to make my pupils bigger.”

Play resumed at 7 a.m. Saturday as the sun rose over ASIJ’s rooftop courts. Karasawa prevailed despite playing with a sore hip and back, injured during Wednesday’s Kanto Plain tournament, also at ASIJ, and she overcame some prematch jitters to dominate Saturday’s play.

“Eriya’s game was fine,” Karasawa said. “My back was bad; my bones kind of move. I was upset a little” prior to the start of Saturday’s play.

Once play resumed, Karasawa stuck to her Friday strategy, hanging along the baseline while Hara took more chances, coming to the net to volley more than she had on Friday. Karasawa simply counterpunched and took advantage of unforced errors to level the match 4-4.

Hara tried to attack Karasawa’s backhand, but the latter kept returning almost flawlessly, holding serve to go up 5-4, then waiting out three unforced errors to arrive at a triple break for championship point. Hara smacked a return into the net and the title was Karasawa’s.

“I’m kind of happy it’s done,” Karasawa said, “but at the same time, I love my team, I wanted to play more.”

A few tears escaped Hara’s eyes as she reflected on the three games. “Yesterday, I was more focused,” she said. “It was hard to continue the concentration” on Saturday.

With the girls singles final in the books, Karasawa and Brown both said this was a symbolic passing of the torch to Hara, who will return next season. “I hope she goes on to take the titles,” Karasawa said.

ASIJ completed a sweep of every team banner and individual title in a Far East tournament on Brown’s watch. The Mustangs had already won the overall Division I school banner prior to Saturday’s play, and also the D-I boys and D-I girls banners.