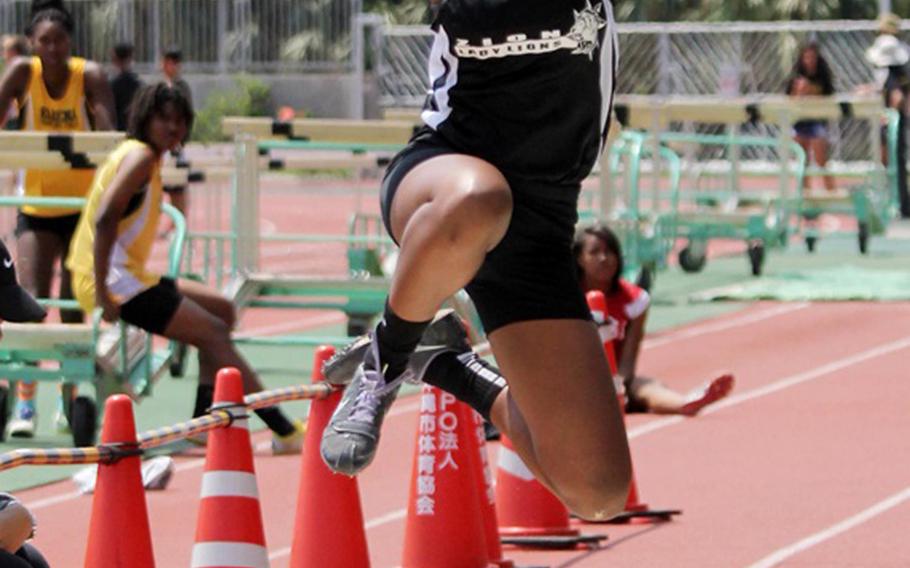 Amora Wood of Zion Christian won the long jump with a leap of 4.88 meters. (Marie Obsuna/Special to Stars and Stripes)

Amora Wood of Zion Christian won the long jump with a leap of 4.88 meters. (Marie Obsuna/Special to Stars and Stripes) 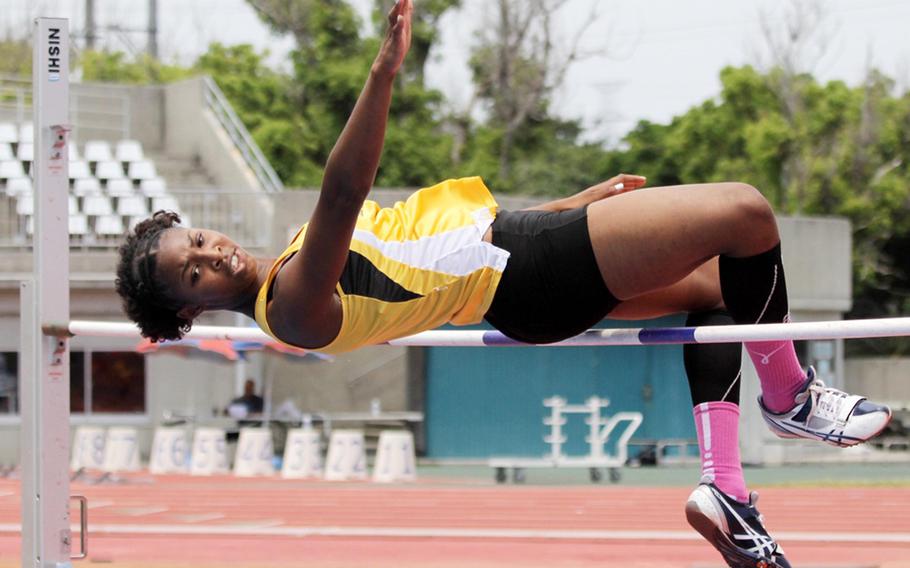 Jasmine Rhodes of Kadena won the high jump with a leap of 1.57 meters; she also won the 400. (Marie Obsuna/Special to Stars and Stripes) Devin Ross of Kadena and Jacob Green of Kubasaki head to the finish in the 110 hurdles; Ross edged Green 16.64 seconds to 16.88 for the win. (Marie Obsuna/Special to Stars and Stripes) 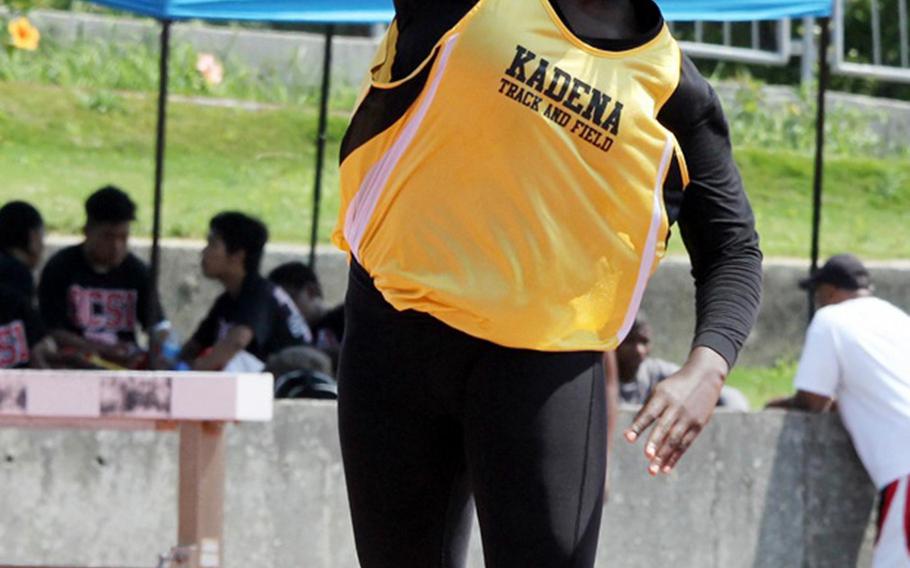 Jazmyn Sharper of Kadena wins the shot put with a throw of 9.69 meters. (Marie Obsuna/Special to Stars and Stripes) 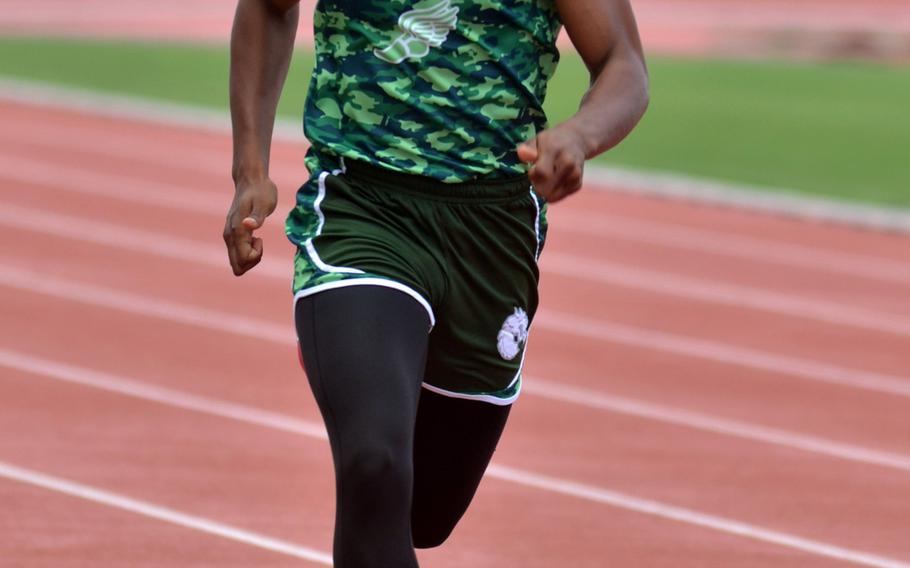 Kubasaki's Deaven Curtis didn't run in the so-called "fast" or "elite" heat in the 100, which said provided him motivation to run against the clock, which he did fast enough to win the event in 11.94 seconds, .12 ahead of teammate Malik Francis. (Dave Ornauer/Stars and Stripes) 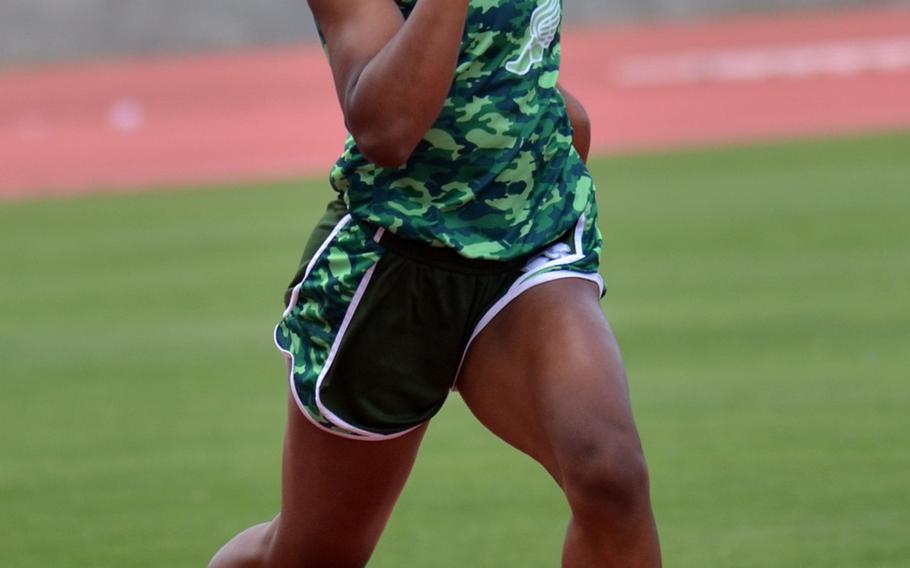 Okinawa's district track and field finals were held the same day as SAT tests, so star runners such as Kubasaki's Kaelyn Francis couldn't run her signature event, the 100, and also wasn't available to run the 400 relay. She returned in time to post a 26.52 time in the 200, the meet's next-to-last event. (Dave Ornauer/Stars and Stripes) Kadena's Hunter Ficenec set a district record in the 1,600 with a time of 4 minutes, 24.59 seconds, breaking the two-year-old mark of 4:37.43 set by Erik Armes of Kubasaki. (Dave Ornauer/Stars and Stripes) 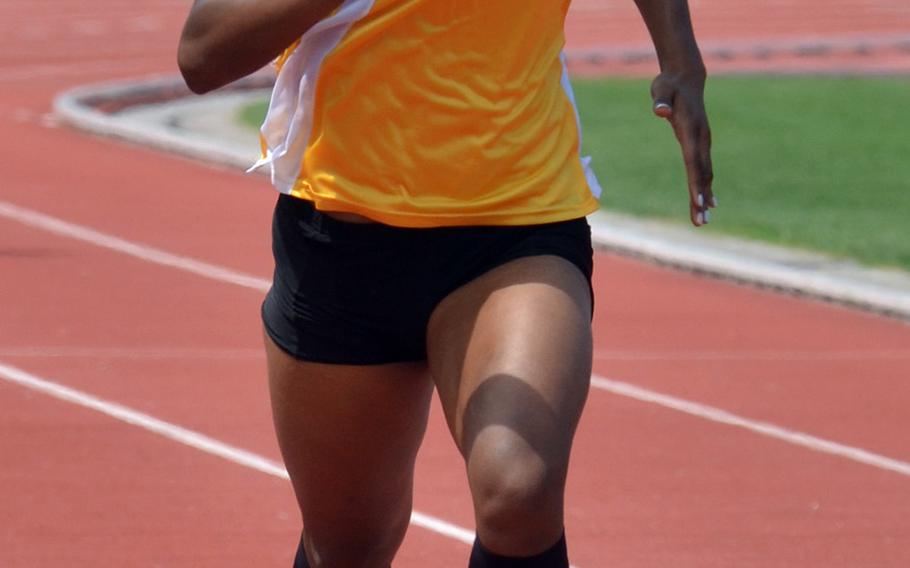 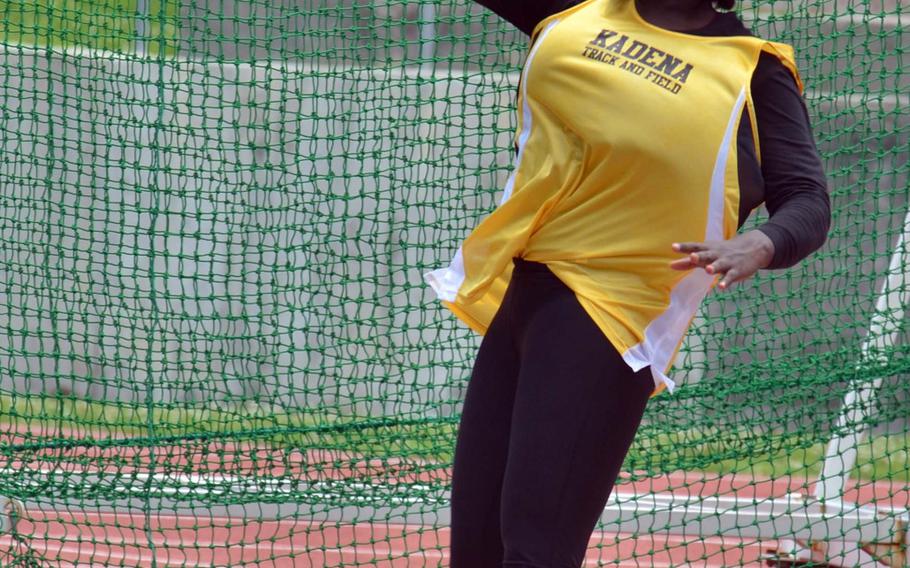 Kadena's Jazmyn Sharper set a district record with a discus throw of 30.30 meters, breaking the eight-year-old mark of 28.74 set by LaKesa McClain of Kubasaki. (Dave Ornauer/Stars and Stripes) 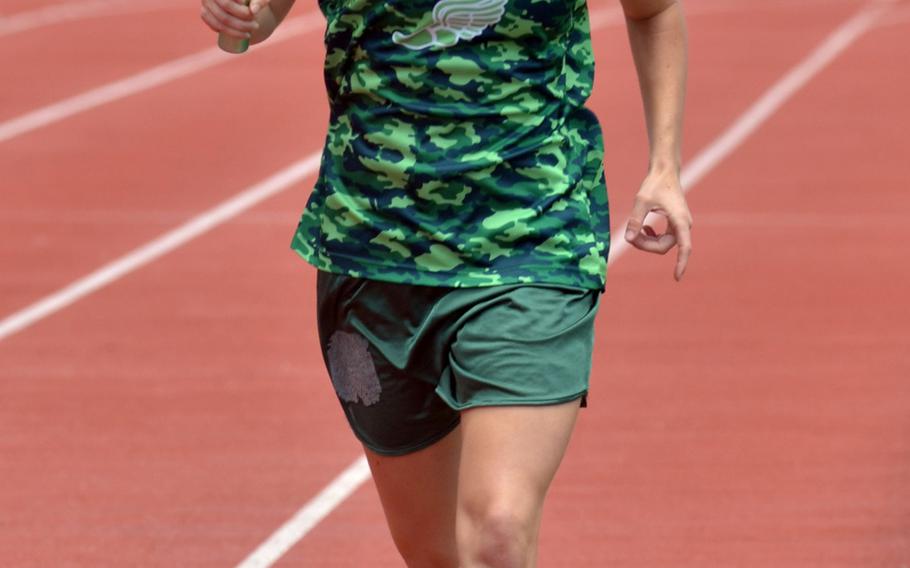 Kubasaki's Rachel Carson runs the third leg of the girls 3,200-meter relay, won by the Dragons in 11 minutes, 17.01 seconds. (Dave Ornauer/Stars and Stripes) Kubasaki's Zoe Jarvis and Kadena's Wren Renquist run side-by-side in the girls 3,200 with Kubasaki's Rachel Carson in trail. Renquist won this and the 1,600 and gave credit to Jarvis and Carson for pushing her. (Dave Ornauer/Stars and Stripes)

OKINAWA CITY, Okinawa – He’d been bothered by a cold, head congested and throat sore. And battling pain in his left knee for much of the season.

One would have never known it, watching Hunter Ficenec run the 1,600 meters during Saturday’s Okinawa district track and field finals.

The Kadena junior not only broke the district record in the event – he demolished it, clocking 4 minutes, 24.59 seconds, breaking the old district mark by nearly 13 seconds.

And he felt as if he could have done better. “If I wasn’t sick and if my knee wasn’t sore, I could have easily broken 4:20,” which would have broken the Pacific record by three seconds, Ficenec said.

It was one of two district records broken in a meet held on a beautiful late-spring day, a week after the Far East qualifying deadline and the same day as Scholastic Aptitude Tests, so teams had to make do without some of their key stars.

The other district record came in the girls discus, in which Kadena senior Jazmyn Sharper recorded a throw of 30.30 meters, or 99 feet, 5 inches. That broke the eight-year-old mark of 28.74 set by Kubasaki’s LaKesa McClain.

“Whoa!” she said when told she’d broken the record. “I can’t stop smiling. I’ve never done anything like that before. I wasn’t expecting that. That’s so cool. I’m really excited.”

The throw also got her closer to the Pacific record of 35.23, also set by McClain in 2007. “Jaz can do that,” said co-coach Mary Bunyan, adding that Sharper has been throwing 103 feet in practice.

Of the prospects of her doing that at Far East later this month, Bunyan said: “It’s going to be exciting.”

The meet featured some surprise winners, including Kubasaki’s Deaven Curtis, who didn’t run in the so-called “fast” or “elite” heat in the 100 but won the event anyway, in 11.94 seconds, .12 ahead of teammate Malik Francis.

Learning that he wasn’t in the fast heat gave Curtis some incentive, he said. “I had to motivate and hype myself,” he said. “When I got into the starting blocks, I told myself I was running against time.”

Another surprise winner was Devin Ross in the boys 110 hurdles. With all eyes on Jacob Green of Kubasaki, Ross passed him in the closing stages and raised his fists as he crossed the finish line.

“I’m so surprised,” he said. “Usually, I finish third or fourth. This time, it felt a lot better. I’m really proud of myself.”

Then, there were those who remained in their element, such as Kadena distance runner Wren Renquist, who swept the 1,600 and 3,200, but credited Kubasaki rivals Zoe Jarvis and Rachel Carson for pushing her; Carson remained on Renquist’s shoulder much of the 1,600.

“It helped,” Renquist said. “They did so well.”

So, too, did Kadena as a team, sweeping the boys and girls teams titles in Bernal’s and Bunyan’s first seasons as Kadena’s coaches.

“They worked really hard this year,” Bernal said. “We had some young athletes, but they came out and worked hard. It feels awesome.”

But the task isn’t done yet, Bernal said, with Far East looming on the horizon May 21-22 at Yokota. “We’re going to go represent,” she said.