Kadena-Kubasaki round one is no contest 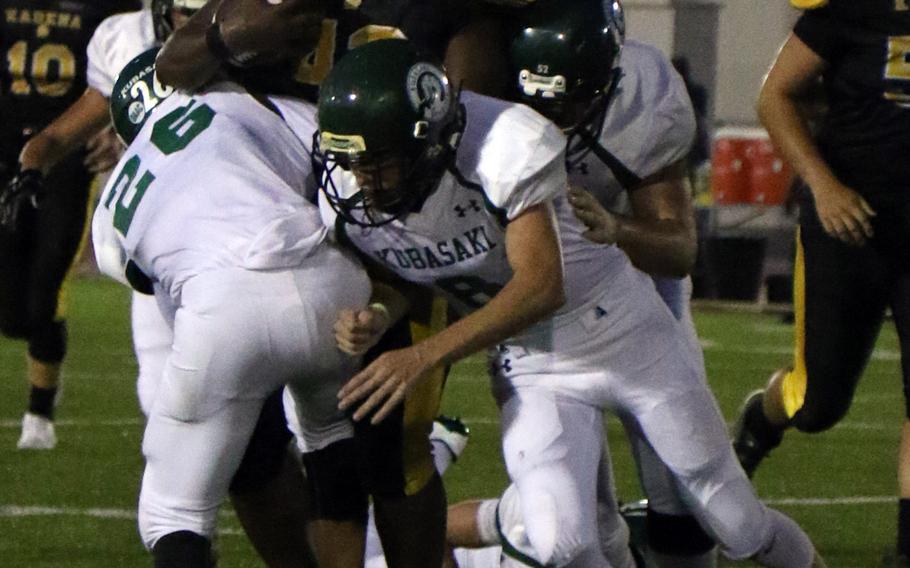 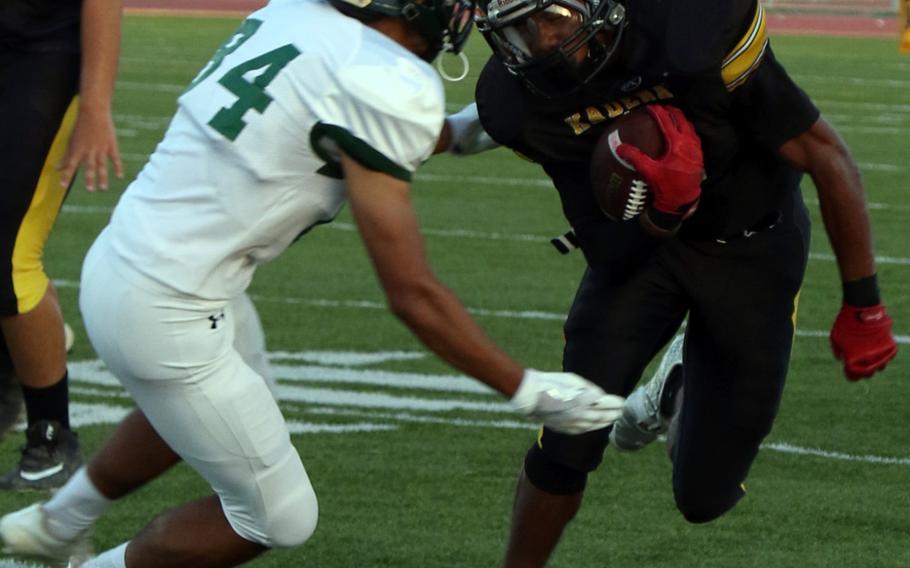 The junior running back ran just five times, but for 199 yards and two touchdowns and intercepted a pass, Cody Sego scored thrice and the Panthers amassed 416 rushing yards in a 43-6 romp Friday over Kubasaki in the Division I opener for Kadena. The Dragons fell to 0-2.

“He’s a perfect fit for us,” coach Sergio Mendoza said. “He’s buying into what we believe in: blocking for each other, running hard for each other and playing better for each other. He’s all in. We all are, and he is, too.”

The Panthers improved to 2-0 with their second win by mercy rule in as many weeks, following on the 44-0 home win over Yokota. Kadena raced out to a 30-0 lead with 5:30 left in the first quarter and the rest of the game was played with a running clock.

McCarter ran for a touchdown of 80 yards on the first play from scrimmage. The Dragons promptly fumbled on the next play, setting up Kadena at the Kubasaki 1, and Sego burst through to make it 16-0 just three plays into the contest, and the rout was on.

Sego added 60 yards on seven carries. “He’s becoming a really smart leader on the field,” Mendoza said of his four-year player. “He’s like a coach on the field. He’s audibling well, he’s adjusting, he’s at a peak, physically and spiritually, that I’ve ever seen.”

Uriah Morris added 112 yards on eight carries with a touchdown and Brayden Frederick added 44 yards on 10 attempts and recovered a fumble.

Kubasaki, which lost at Nile C. Kinnick 34-0 the previous week, scored its first touchdown of the season when Skyler Klimek hit Nick Jenkins from 35 yards out in the second half. “We moved the ball better than we did last week,” Bales said.

Kadena is a “talented, well-coached, well-prepared team; they were too much for us,” Bales said. “We’re still a work in progress. We have to keep working and work smarter and figure some things out. We have to … block, tackle and execute better. We made too many mistakes.”

Likewise, the Panthers still have their work cut out for them, Mendoza said. “Our offensive line isn’t firing as well as it should, we have to work on tackling. We have a lot we need to do.”

The Dragons travel to Humphreys for the first time for a battle on Sept. 9 at the Blackhawks. Kadena gets the week off before visiting defending D-I champion American School In Japan on Sept. 16.