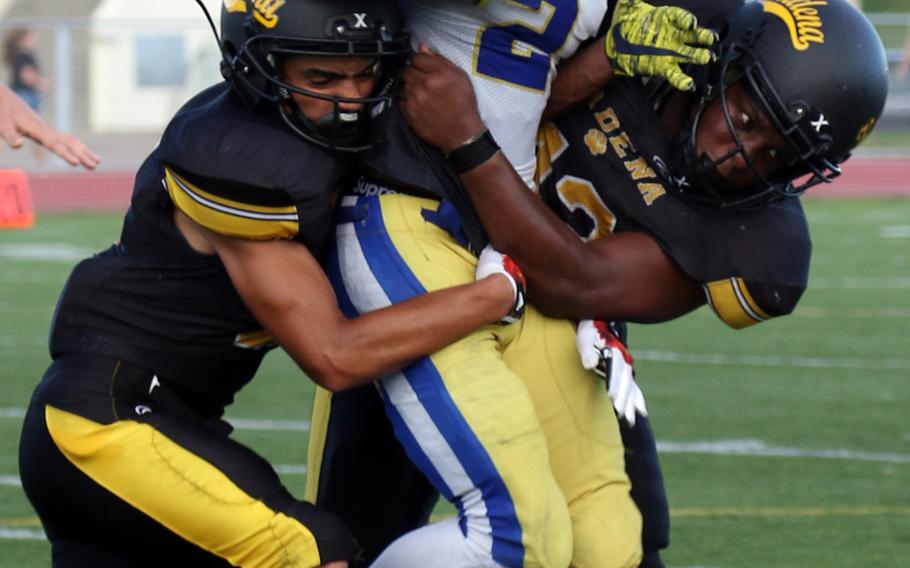 KADENA AIR BASE, Okinawa – It took a while for Kadena to find its stride, but once the Panthers did, it was apparent that it would be a fun night for newcomer Eric McCarter, and a long uncomfortable one for the guests from Yokota.

McCarter, a junior, rushed seven times for 78 yards and three touchdowns and the Panthers overwhelmed Yokota with 402 yards in a 44-0 rout Saturday at Kadena’s Ryukyu Middle School.

“He’s got a lot of speed and he’s got athletic ability, but more than that, he understands football,” coach Sergio Mendoza said of McCarter. “He’s a great fit for our squad and the type of football we play.”

Any doubts Kadena had regarding its rebuilding offensive line, which lost three key starters, were answered resoundingly. Kadena raced to a 30-0 lead at halftime in the non-divisional contest, which was played the entire second half with a running clock.

“It feels good, just knowing that I can count on my line to open up the holes for me,” McCarter said. “I give those three touchdowns to my offensive line, because they did the hard work.”

“Other people were questioning about the line, but I never questioned my line,” senior quarterback Cody Sego said. “I knew once two-a-days started and I saw them, I knew we were going to be fine. And they did great.”

Early on, it appeared as if fortune was in Yokota’s favor. On fourth down, a Yokota punt bounced off a Kadena helmet and set the ball up deep in Kadena territory. But Yokota was kept off the scoreboard when Kadena’s Brayden Frederick swatted down a field-goal attempt.

Kadena hurt itself early by a series of penalties on its first possession and the first quarter remained scoreless. “We made some key mistakes and those penalties allowed them (Yokota) to stay in the game for a while,” Mendoza said.

But once the second quarter started, Kadena’s offense clicked. Bursts of 26 yards by Sego and 31 by junior Uriah Morris set up Kadena deep in Yokota territory, where McCarter scored from 11 yards out. He also ran in the two-point conversion for all the points Kadena would need.

McCarter followed that with a hefty punt return, and two more runs by Sego and Morris put the ball at the Yokota 6, from where McCarter scored again. Sego converted for two points to make it 16-0.

McCarter scored his final touchdown of 26 yards on the next possession. A 30-yard touchdown run by Morris triggered the running clock for the rest of the game.

“The new guys definitely stepped up and helped us; they made some really big plays,” Sego said.

Though the scoreboard may have read success, Kadena players and coaches said they came away knowing there are areas that need improvement and they have a long way to go.”

“We can do better,” Mendoza said. “We have to be more aggressive and learn our system better. It was a good first step. Not a great first step, but a good one.”