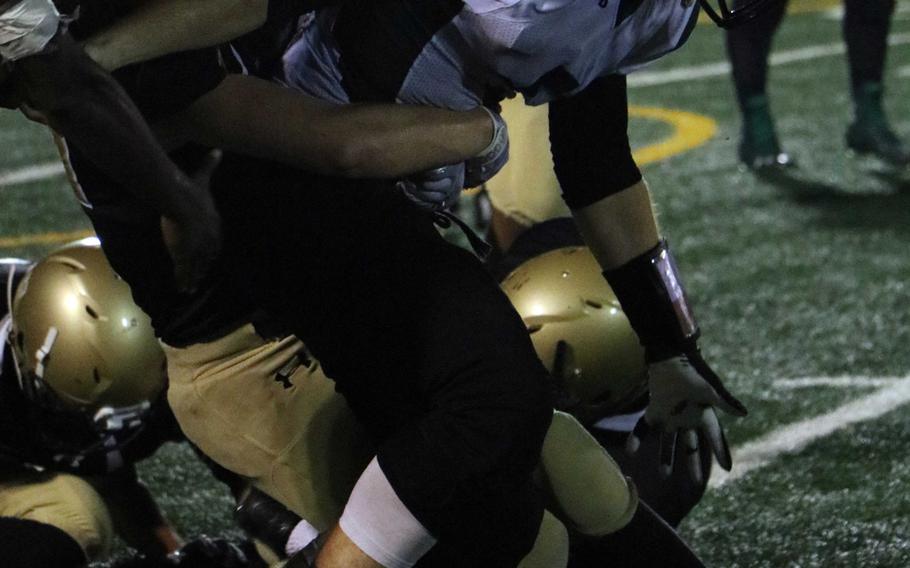 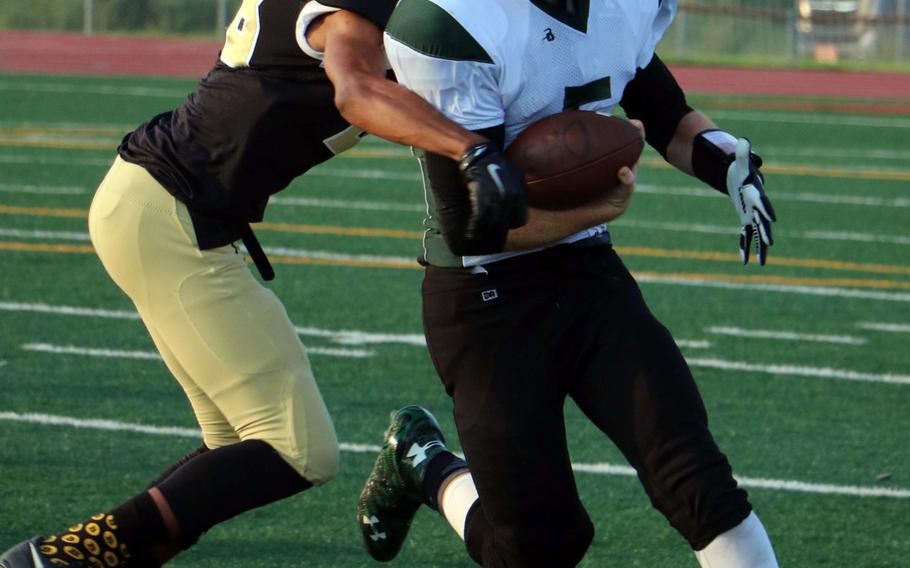 Daegu QB William Bair gets corralled by Tyrell Alexander of Humphreys during the Blackhawks' 27-8 win Friday. (Angela Root/Special to Stars and Stripes) Humphreys' ball carrier Da'Shun Cline gets wrapped up from behind by Daegu's Jarvis Stokes during the Blackhawks' 27-8 win Friday. (Angela Root/Special to Stars and Stripes)

CAMP HUMPHREYS, South Korea – David Key began the season at outside linebacker, but was moved inside by Humphreys’ coaching staff to provide more of a presence in the middle. The freshman has thus far rewarded their faith.

Key recorded 10 tackles, one sack and a fumble recovery, leading a stingy defense that kept its opponent’s offense off the scoreboard for the second straight week as the Blackhawks downed three-time defending Far East Division II champion Daegu 27-8 on Friday.

“Not bad at all for a freshman,” assistant coach Sa’Voda Gregory said of Key. “He’s one to watch this season.”

“We needed to clog up a hole on defense and that’s what we did,” Blackhawks first-year coach Steven Elliott said. “We owned the middle, and a big part of that was Mr. Key.”

Joining Key in double figures in tackles were Owen “Thor” Williams with 11 tackles plus two interceptions, one which he returned for a touchdown; and Marcus Childs, who added 10 tackles. Criss Carlos added six tackles, two of them sacks.

“This was a total team effort,” Elliott said.

Humphreys, which blanked Songdo, a Korean team, 32-0 in its opener last week, allowed only a 40-yard fumble-return touchdown by Daegu’s Jacob Litton to open the scoring, and a safety, on which Bulotovich was gang-tackled in the end zone in the fourth quarter.

“We came out with a good game plan, four quarters, never quitting and it showed on the scoreboard,” Elliott said. “We’re very excited. But it’s just one game.”

“We’re still playing a lot of freshmen, working out the basics,” Sims said, adding that Daegu would gain some yards on one play only to make a mistake on the next such as a false-start penalty. “We need to execute on all plays instead of every other play.”

It was the Blackhawks’ second victory in five games over Daegu in the school’s four-year history. Humphreys edged the Warriors 29-26 on Oct. 24, 2014, in their second meeting.

Both teams get a bit of a break before facing Korean teams later in the month, Daegu taking on Samsung at Camp Humphreys on Sept. 24 and the Blackhawks facing the same Korean team a week later.

Daegu hosts Humphreys on Oct. 14, needing to beat the Blackhawks by 20 points or more to have a chance at making it four straight D-II titles. A Humphreys win or a loss by 18 or less would give the Blackhawks the right to travel to Japan and play for their first D-II crown.

“That’s the plan, but that’s a long-term goal,” Elliott said. “The way to reach the long-term goal is to knock out the short-term.”