Boys soccer Athlete of the Year

Falcons’ Adkins takes one for the team 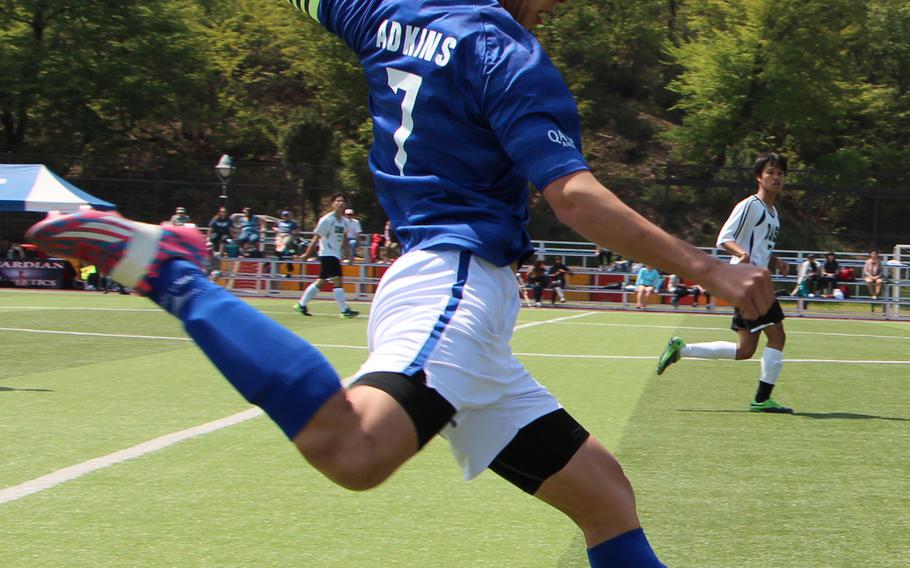 YONGSAN GARRISON, South Korea – Given the choice, HoKyong Adkins probably wouldn’t have played on the back line for Seoul American this season.

But coach Steve Boyd was in dire straits. Seven starters from the 2014 team had either graduated or transferred. Worse, the entire defensive back line was gone, and there was every chance that primary defender David Neaverth wouldn’t return until midseason, if at all, because of a back injury.

So Boyd turned to his primary scoring option from 2014.

Even though Adkins had 30 scored goals last season, Boyd told the senior that he was moving him to the back. It would be tough going for the first half of the season, Boyd reasoned, just to keep matches close and competitive.

How did Adkins react?

“Put me wherever you need me, coach,” Adkins told Boyd.

It wasn’t as if Adkins was new to playing defense; it was his original position, he said, when he picked up the sport in elementary school. And not only did Adkins swing to the position, he helped teach other defenders how to shift, set up, pass between players and other things.

“He was a coach on the field, absolutely,” Boyd said. “Not only in the games, but in practice. And the good thing is, with the leadership, him being a senior and obviously having played, the kids had a lot of respect for him. And so they listened. And they got better and we got better as a result.”

Eventually, Neaverth returned and Boyd inserted Nick Gagnet in the defense and Adkins returned to the front, where he finished with 16 goals and six assists.

That helped lead to a 15-3-3 overall record, and a runner-up finish in the Korean-American Interscholastic Activities Conference Blue Division regular season. Then came a KAIAC Blue tournament title — the first for the Falcons in four finals appearances — and a second Far East Division I Tournament title in four years.

For his positional sacrifice and leadership and the Falcons’ resulting successes, Adkins has been named Stars and Stripes Pacific high school boys soccer Athlete of the Year.

All of that didn’t come easily, Boyd said.

Time and again, the Falcons had to come from behind, four times in the regular season, in the KAIAC Blue tournament semifinals and championship match and had to rebound after losing two pool-play matches in the Far East D-I Tournament.

“They were just so resilient,” Boyd said. “I haven’t had a team … that played with so much heart as this team has. They gave everything. They may not have had the skill, but there’s no team that showed this much will and heart as this team showed. You can’t coach that. The kids either have it or they don’t. And Adkins was the centerpiece.”