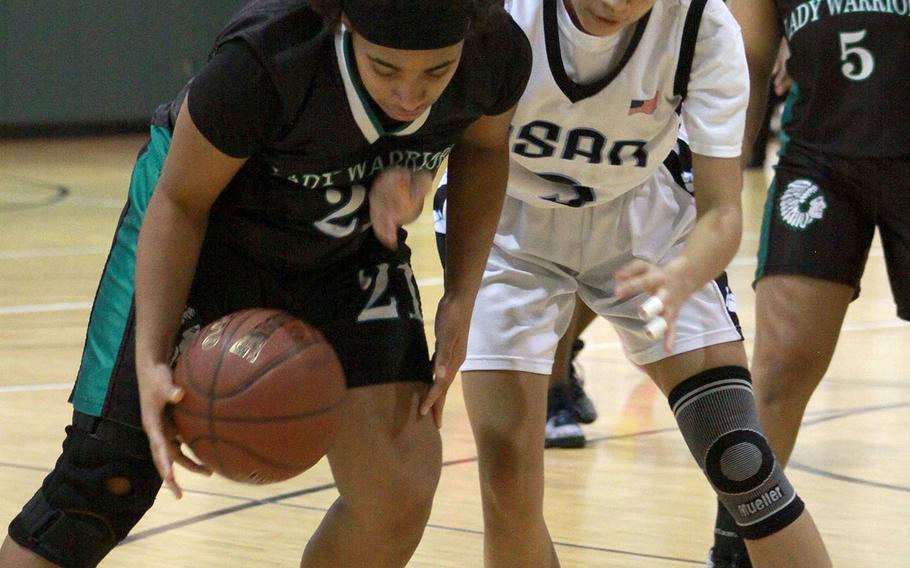 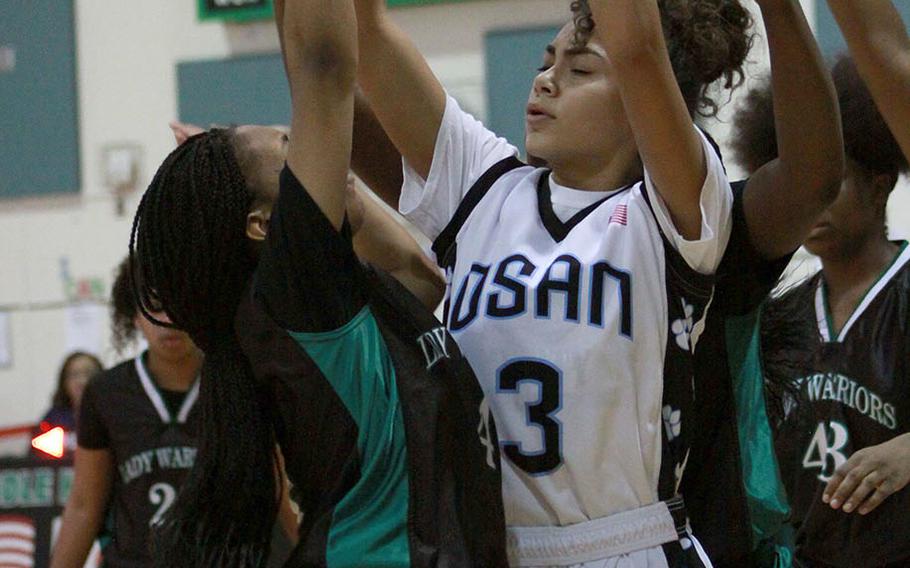 Bethani Newbold scored 27 points, Ariel Harvey chipped in with 10 and Jya Van had 11 rebounds and blocked 10 shots as the Warriors romped 62-38 on senior day Saturday at home against Osan.

Coupled with Humphreys’ 45-8 home win against Yongsan, the Warriors and Blackhawks each finished 9-1 in the regular season.

But Daegu edged out Humphreys for the regular-season title based on point differential. The Warriors beat the Blackhawks 45-42 on Dec. 11 at home, then lost at Humphreys 38-37 on Jan. 11.

“We are just ready to compete for the Cup at Seoul Foreign,” coach Jonathan Van said of the postseason Korea Cup Tournament, scheduled for Jan. 31-Feb. 1.

At Humphreys, Acacia May had 18 points, seven rebounds and five steals as the Blackhawks raced in front 37-4 at halftime and were never threatened by the Guardians.

Daegu will enter the Korea Cup tournament as the No. 1 seed. The Blackhawks, who beat the Warriors in last year’s Korea Cup final at Humphreys, will be the No. 2 seed.

Collin Metcalf had 14 points, 25 rebounds and four blocks and Myles Johnson had 19 points as the Blackhawks routed Yongsan 56-32.

Kubasaki boys enjoy breakout quarterKADENA AIR BASE, Okinawa – It took more than two seasons after sitting out 2016-17 with a damaged ankle, but Dylan Canlas finally enjoyed a breakout performance in a truly breakout quarter for Kubasaki’s boys basketball team.

The senior guard played a pivotal role in the final 33 seconds, hitting a basket and four foul shots and making a crucial steal in the closing seconds to boost the Dragons to a 63-58 comeback win Saturday over Taipei American at Ryukyu Middle School gym.

“I’ve been waiting for a game like this,” Canlas said. “We’re the underdog, so we gotta show out. And we did.”

The Dragons trailed the Tigers, in town for a four-game exchange with Okinawa’s DODEA teams, by 16 points after three quarters, but outscored the Tigers 31-10 in the final frame, taking the lead for good on Canlas’ driving layup 59-58 with 33 seconds left.

“Dylan had a fantastic game,” coach Saleem Malik said after the Dragons leveled their record at 3-3. “I think the boys played great ball.”

Kadena’s and Kubasaki’s girls teams had it rough, the Panthers falling 61-35 and the Dragons 50-27 to the Tigers.

St. Mary’s then hosts the Kanto Plain finals on Feb. 1, with the Far East meet to follow Feb. 13-15 at Osan Air Base.