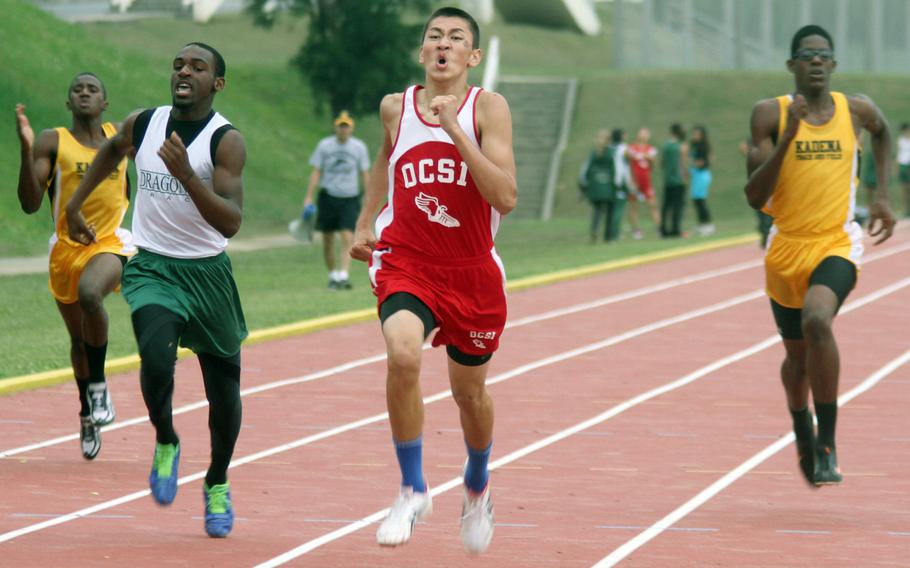 Okinawa Christian School International's Shawn Monroe leads the pack down the home stretch of the boys 400-meter dash with Kubasaki's DeQuan Alderman flanking him to his right and Kadena's Boysie Gorden to his left during Friday's Okinawa Activities Council track and field quadrangular meet at Kadena Air Base, Okinawa. Monroe won in 53.59 seconds. (Marie Obsuna/Special to Stars and Stripes)

Okinawa Christian School International's Shawn Monroe leads the pack down the home stretch of the boys 400-meter dash with Kubasaki's DeQuan Alderman flanking him to his right and Kadena's Boysie Gorden to his left during Friday's Okinawa Activities Council track and field quadrangular meet at Kadena Air Base, Okinawa. Monroe won in 53.59 seconds. (Marie Obsuna/Special to Stars and Stripes) 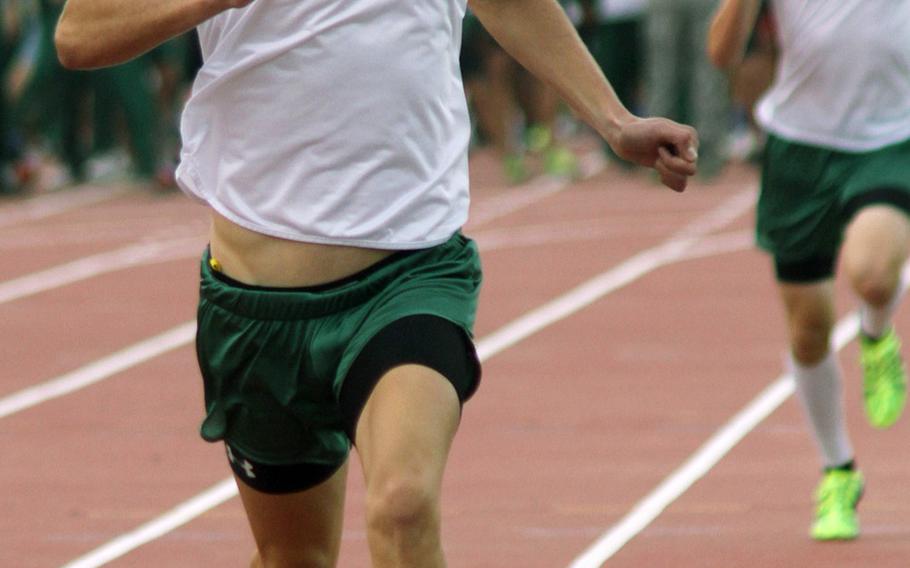 Kubasaki sophomore Erik Armes heads down the home stretch of the boys 1,600-meter run, with senior teammate Ryan Bugler in trail during Friday's Okinawa Activities Council track and field quadrangular meet at Kadena Air Base, Okinawa. Armes won in Pacific-record time of 4 minutes, 25.88 seconds, beating the old mark of 4:28.3 set in 2000 by Kyle Carrick of Christian Academy Japan. Bugler, who set the pace for Armes the first three laps, took second in 4:30. (Marie Obsuna/Special to Stars and Stripes) 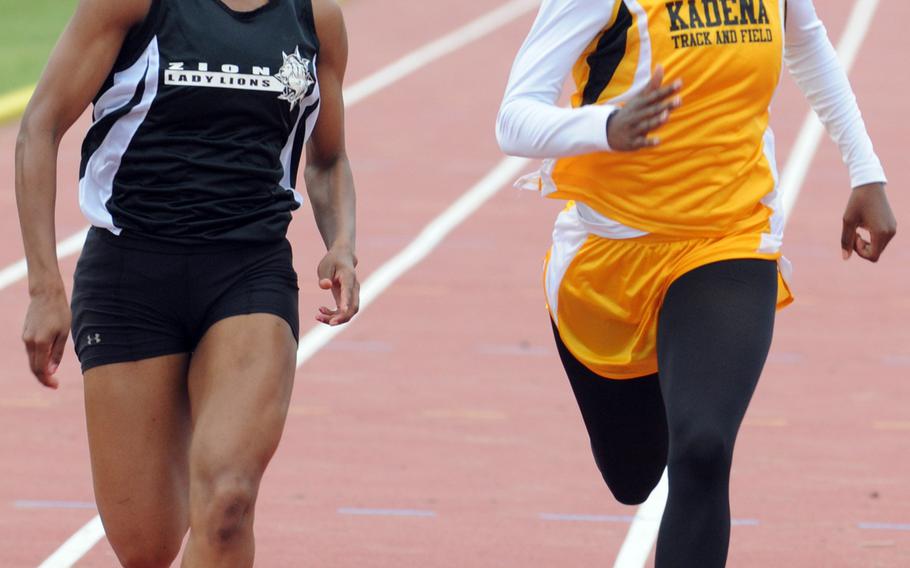 Zion Christian Academy's Jade Cummings and Kadena's Janika Caines, with her left shoe untied, pound for the finish of the girls 100-meter dash during Friday's Okinawa Activities Council track and field quadrangular meet at Kadena Air Base, Okinawa. Caines won in 12.4 seconds; Cummings was second, a tenth of a second behind. (Dave Ornauer/Stars and Stripes) 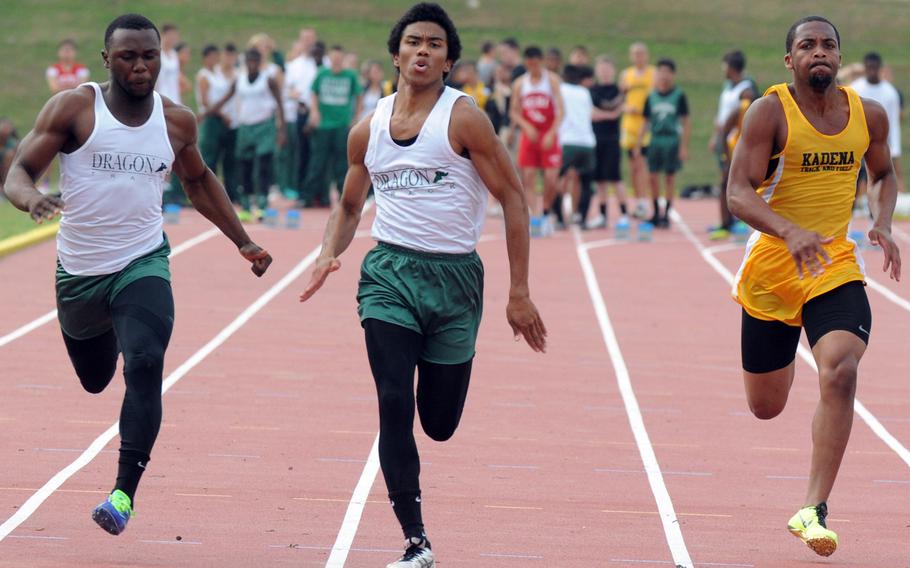 KADENA AIR BASE, Okinawa – Distance runners continued their assault on the Pacific high school track and field record book Friday, and even sprinters are starting to find their way into the chase. Leading the charge was Erik Armes, the Kubasaki sophomore distance specialist who shattered the 13-year-old record in the 1,600-meter run. Others making a case for record space were Kubasaki’s Ryan Bugler (800) and Jessica Ircink (1,600) and Kadena’s Janika Caines (200). The record book dates back to at least the early 1970s, well before any of those currently trying to break them were born. As he has all season, Armes credited Bugler, his training partner. “He deserves every little bit of that record,” Armes said after he ran a 4:25.88, almost 2½ seconds faster than Christian Academy Japan’s Kyle Carrick’s 4:28.3 set in 2000. “It’s all this guy. He was the one who got me to the record. It would have been impossible without him.” Bugler paced Armes through the first three laps, then Armes took command on the back stretch of the final lap. “I knew if he (Bugler) was with me, I’d break the record. He’ll go under 4:28, too.” “He’s a winner,” Bugler said of Armes. “Natural talent and hard work.” Dragons distance coach Paul Campbell feels Armes is capable of reaching the 4:10s and Bugler at least 4:25 by next month’s Far East meet. Armes, he said, “has a few more meets left, he feels comfortable, his splits are perfect and he has the confidence. They both have it.” Bugler went record-hunting himself, clocking 1:58.52 in the 800, coming within 1.2 seconds of CAJ’s Blake Bannister’s 1:57.8 set five years ago. “I finally broke 2 (minutes),” he said. “I could have pushed it at the end. But I know now that it’s possible.” Ircink kept chipping away at the girls 1,600 mark of 5:24.28 set three years ago by Seoul American’s Siarria Ingram. Ircink was timed in 5:27.32, beating her old personal best of 5:29.87 set last month. “I’m just doing my best, the best I can do,” Ircink said, adding that she doesn’t consciously run with the record in mind, but she feels she can break it “at Far East. That’s when the pressure’s on.” With Zion Christian Academy’s Jade Cummings, her chief rival, right on her heels, Caines blazed to a 25.54 in the 200, just ahead of Cummings (25.64) and within .51 seconds of the Pacific record 25.03 set in 2003 by Kubasaki’s Lorianne Roxas. “It feels great. I’m so proud of myself. Hard work does pay off,” said Caines, adding that the motivation of her sprint coach Kristin Arnold “makes me want to strive to work harder.”

Soccer-- Ebony Madrid had a hat trick and Osan American’s girls soccer team finished its regular-season schedule 8-3-1 by routing Yongsan International-Seoul 6-1. The Cougars earned the No. 2 seed in next weekend’s Korean-American Interscholastic Activities Conference Five-Cities Division Tournament at Seoul Foreign. “Best way we could have ended our season,” coach David Hamilton said. Osan’s boys side (4-5-3), meanwhile, surprised YIS-Seoul (5-2-3) with a 1-1 draw. ¬¬-- Snow fell during Yokota’s boys 2-1 win at Robert D. Edgren, with Derek Hoopes and Shin Clanton each scoring goals. The girls also won 2-0. Bad weather earlier in the week forced the cancellation of Yokota-Edgren baseball and softball games on Friday due to wet grounds; Saturday’s forecast calls for good weather. ¬¬-- In an historic first regular-season meeting between Kadena and Nile C. Kinnick at Matthew C. Perry, two of the matches ended up as scoreless draws, while the Panthers of Okinawa defeated the host Samurai 3-0 behind two Yuji Callahan goals. The scoreless Kadena-Kinnick match was called with 20 minutes left when a portable lighting device trucked in for the match malfunctioned. On the girls side, Kaile Johnson stretched her Pacific-leading goal-scoring total to 24 and Aiko Allan tallied twice as Kinnick blanked Perry 3-0. ¬¬-- Daegu’s girls soccer match at Yongsan Garrison against International Christian-Uijongbu also ended 0-0. Three different players scored for the Warriors, who beat the Eagles for the second time this season 4-1 in a match featuring one own goal for each side.

SoftballDaegu’s softball team spotted Seoul American a four-run lead before rallying and holding on to beat the Falcons 10-9, also at Yongsan. “I am very proud of this team,” coach Ken Walter said after Daegu’s fourth win in five games. “I believe a team has to learn to win. This team has certainly done that.”ornauer.dave@stripes.com