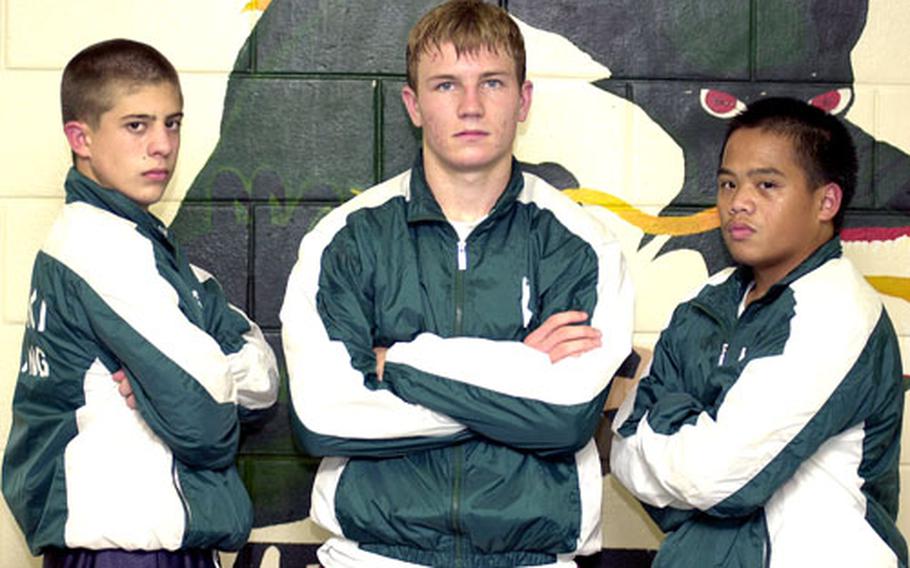 Bouts now consist of three two-minute periods, not two three-minute periods. Decision scores are based on periods won, not total points, though a pin still will end a bout. A wrestler might lose even if he outscores his foe 7-3 but loses two of three periods.

Going out of bounds now will result in points lost or awarded to opponents, as will passive or non-aggressive wrestling. Conversely, wrestlers who push an opponent out of bounds will be penalized. Also, wrestlers now may score multiple points with one move; formerly, they could score just one two-point tilt with a hold, then had to switch grips.

Even overtime periods will change.

Previously, wrestlers would clinch each other around the torso, with the first to score a takedown winning. Now, the referee tosses a coin and the winner locks his arms in an &#8220;Indian Grip&#8221; around the foe&#8217;s leg, giving him a decided edge over the coin-toss loser.

That change concerned at least one coach. Said Richard Huffer of Nile C. Kinnick of Japan: &#8220;It seems like the match in sudden death is going to be determined by a coin toss.&#8221;

Even without the changes, the season follows perhaps the tightest Far East tournament in the event&#8217;s 30-year history.

Kubasaki and Kinnick wrestled to a 26-26 draw in the 2005 dual-meet final at Yokota Air Base, with Kubasaki winning the title via tiebreaker. Kubasaki also won the individual freestyle team title by three points over island-rival Kadena, for its Pacific-record 20th Far East team title.

She calls their presence &#8220;vital&#8221; in helping bring along a rookie-laden lineup. &#8220;It&#8217;s whoever gets the wrestlers elevated to the competitive level in a short amount of time. You have 13 weight classes. You have to bring them all up to speed. I consider this a rebuilding year but I have some very strong returnees to build around.&#8221;

Pacific competition began Saturday with the DODDS-Japan Invitational at Misawa Air Base, Japan, while Seoul American and Osan American squared off in the first DODDS-Korea dual meet.

DODDS teams say they plan to use Kinnick&#8217;s Jan.28 Invitational &#8220;Beast of the Far East&#8221; tournament as a Far East tournament tuneup; it will be the one major event featuring DODDS and international school powers such as St. Mary&#8217;s International of Tokyo.

Wrestler who wins two out of three periods or scores a pin at any point wins the bout; previously, wrestler with best total score after two periods or a pin won the bout.

Wrestler may score two-point tilts with the same hold or move, such as a gut wrench or ankle lace; previously, wrestler could only score one tilt with one hold.

5-0 if wrestler wins by pin, injury default, withdrawal, disqualification or if his opponent is cautioned three times.

4-0 if wrestler wins by technical fall/superior decision (two periods won by scores of 6-0) and no technical points scored by loser.

4-1 if wrestler wins by technical fall/superior decision and loser scores at least one technical point.

3-0 if wrestler wins two periods by less than six points each and loser scores no technical points.

3-1 if wrestler wins two periods by less than six points each and loser scores technical points.

0-0 if both wrestlers are disqualified.