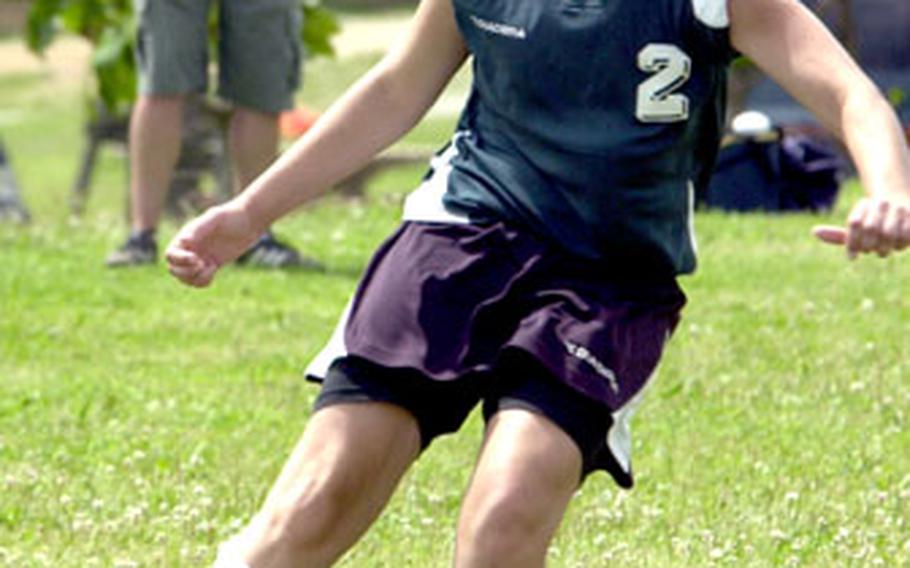 The Panthers striker, already the region&#8217;s season record holder with 66 in 2005, scored five goals in a 12-0 victory over Oroku, a Japanese team. That performance gave Abel 32 goals this season and 149 overall, three more than her best friend, former Kubasaki striker Erin Foote, who graduated last spring.

Foote returned to the island on Thursday, following completion of her second semester at Winthrop, in Rock Hill, S.C., where she plays soccer on partial scholarship.

Next fall, Abel is to join Foote at Winthrop.

Abel likely is far from finished adding to her goal total. The Panthers have a few more regular-season matches left, including Wednesday&#8217;s showdown with Foote&#8217;s Dragons at Kubasaki. Then there&#8217;s the Far East Class AA tournament May 15-19, which Kubasaki hosts.

Foote back on Okinawa as Kubasaki assistantLess than 48 hours after landing on Okinawa, Foote already had joined the team for its Saturday match at Okinawa Christian International, holding a clipboard and passing advice and tips to her former teammates. And she said she&#8217;d much rather be on the field than the bench.

&#8220;It was great, just like business as usual,&#8221; coach Terry Chumley said of Foote, adding that she will help put the Dragons players through practice drills as well as provide insight during the Class AA tournament. That Foote knows Chumley&#8217;s system and expectations is &#8220;definitely&#8221; a help, she said.

They didn&#8217;t win Saturday&#8217;s second of two matches but Daniel Goddard&#8217;s two goals, one in each half, were enough to ensure the Cobras of a 2-2 tie with Matthew C. Perry. Earlier Saturday, the Samurai downed the Cobras 4-1.

The Cobras have spent the season battling injuries and ineligibility. Before Saturday&#8217;s tie, the team had lost 12 straight matches in the Japan Soccer League, with the Far East Class A tournament starting in a week at Camp Walker, South Korea.

The result: Yokota lost again, but this time 2-1.

Monahan mostly shackled Kobayashi but the freshman found two chances and made each of them count. Yokota remained off the scoreboard until Tom Gass found the net with one minute remaining.

The Panthers fell to 13-3-1, while the Knights remained unbeaten in six matches.