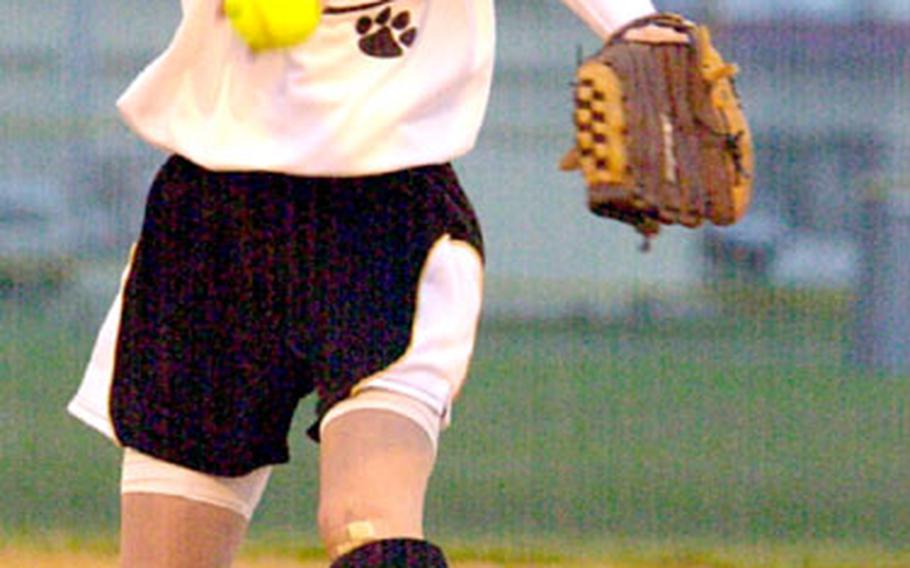 Kadena freshman Kara Davis pitches against Kubasaki during Thursday&#39;s game at Camp Foster, Okinawa. Davis gave up no hits, two walks, a hit batsman and a wild pitch and struck out six in an 18-8 victory. (Dave Ornauer / S&S)

Kadena continued its perfect run against Kubasaki. In 2003 and 2004, the teams played slowpitch softball against each other; this season, the league has converted to fastpitch, and Kadena has four returnees and eight freshmen on its 13-player roster.

The key, Tony Davis said, is not so much the team&#8217;s ability or numbers, but its attitude.

Lindsey Davis&#8217; bat helped Kadena take a 9-0 lead after 2&#189; innings. She tripled in a run and scored on a wild pitch in the first, added a sacrifice fly in the second, then doubled and stole home in the third. Kara Davis added a run-scoring fielder&#8217;s choice in the third.

Davis also appeared heading toward adding her name to a series of stellar Pacificwide pitching performances this season. She retired the first 10 Dragons in order, striking out four, before Monique Chino reached on an error, stole two bases and scored on another error.

Kubasaki broke through for seven runs in the fifth. Chino singled in two runs and Courtney Griggs added an RBI hit &#8212; the only hits Kubasaki managed in the game &#8212; off reliever Stacey Ware, who began the game at second base. Kara Davis, who moved to the outfield, returned to the mound to get the last two outs.

He gave up his first two hits of the season and issued five walks, but struck out 14 in a complete-game shutout as Seoul American prevailed 1-0 at the Lombardo Field FourPlex.

&#8220;They definitely follow the ball better, they were students of hitting, they had good mechanics,&#8221; Goodman said of his Korean opposition.

Giovanni Rosa doubled in Goodman for the game&#8217;s only run in the third inning. Goodman had two singles in two at-bats.

It could have been worse for Young Nam; the Falcons (5-0) stranded 12 baserunners.

Goodman has not allowed an earned run in 14 innings and has allowed eight walks and two hits while striking out 32 batters, an average of 2.3 per inning and 16.1 per game.