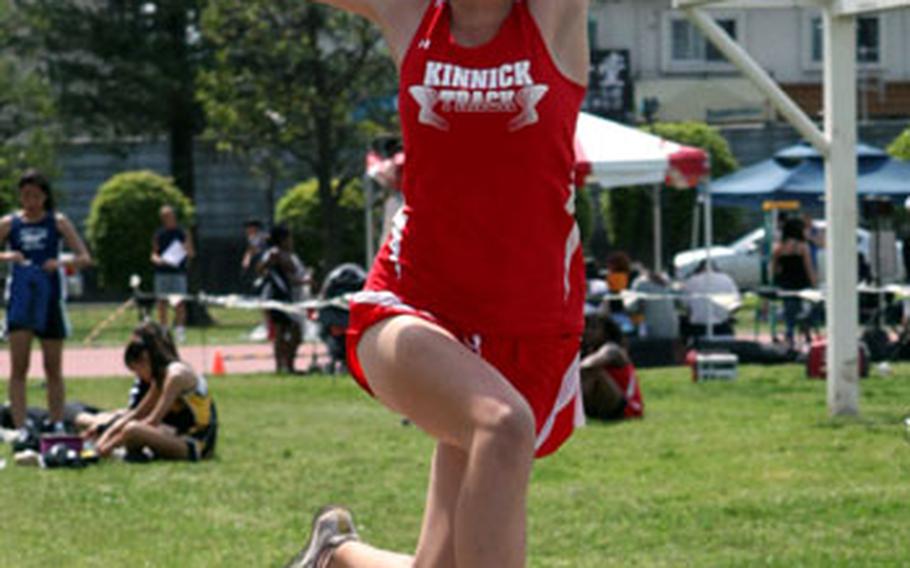 "Last year, we weren&#8217;t even in contention, and this year we made such a large turnaround," Kinnick coach Al Garrido said. "The attitude was different, and a lot of the leader girls like sprint captain Ashley Barnes really stepped up. Their attitude and work ethic was so good this year. I would have been happy even if we hadn&#8217;t won today."

No league records fell in the meet, considered a prelude to Saturday&#8217;s Kanto Invitational at Tokyo&#8217;s Oi Pier Ground and the first Far East meet May 24-25 on Okinawa.

Sunghoon Kim of CAJ pulled something of an upset in the 400 hurdles, outrunning favored Cory Serfoss of Kinnick 57.2 seconds to 59.2. Serfoss held away in the 110 hurdles with a 15.9.

"We still have something else to play for. It&#8217;s not over," Panthers coach Jesse Costa said. "It&#8217;s going to be nice to play somebody other than Kubasaki. This legitimizes our sport."

Schweers and Seals each went the distance, with Schweers driving in four runs in the opener and Seals two in the nightcap.

Kaleb Robinson went 5-for-5 with three homers and 10 RBIs. P.J. Varner went the distance in the first game and Patrick Duffy got the win in the nightcap.

Coach Randy Toor said he was especially pleased for his six seniors, three of them pitchers, two of which he&#8217;s had for four years and three for three years.

"They believed in our system and program and took it over," Toor said. "They knew what I expected from them and they produced."