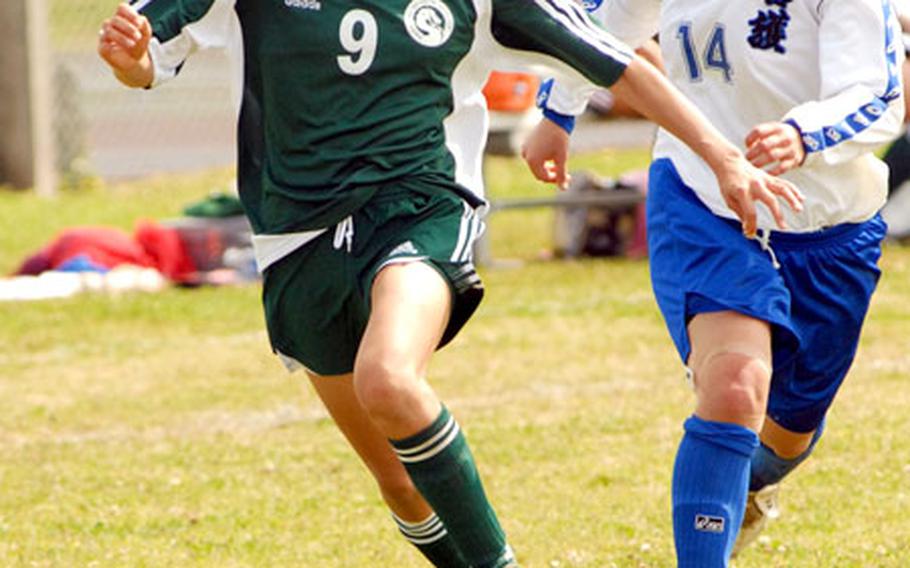 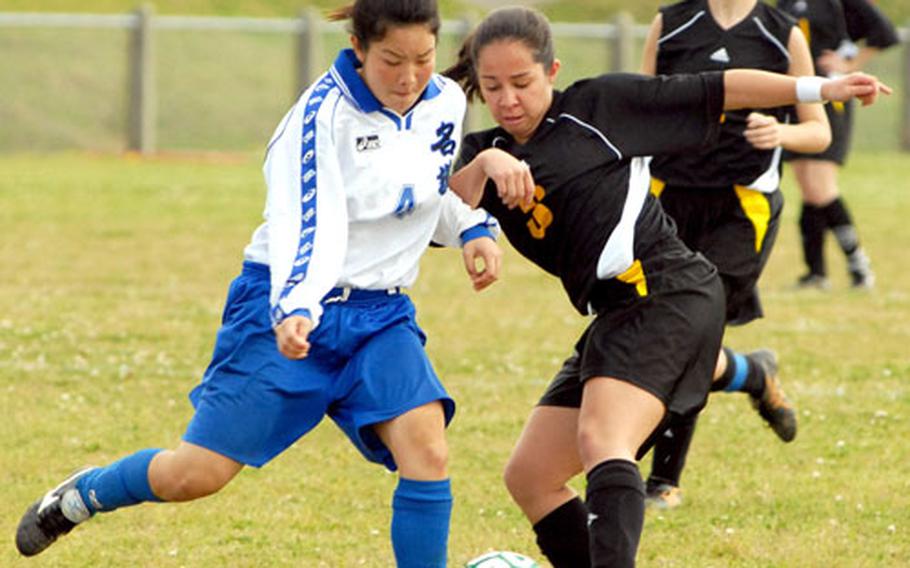 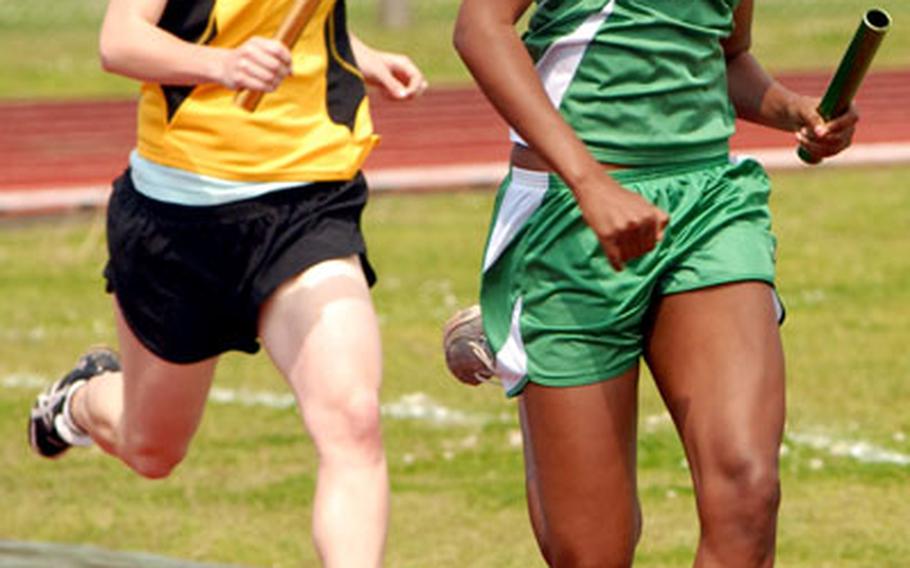 The rain finally moved on after more than a week of showers and downpours, allowing Kadena and Kubasaki to play their openers on Okinawa.

But it was the play of Kyla Feeney on right wing that proved the deciding factor, Kadena coach Hoa Nguyen said.

Newcomer Jessica Osborne scored twice and Kara Koeneke once and Kubasaki held off a second-half rally to edge Nago 3-2.

Kubasaki&#8217;s boys opened this season the way they started the 2006 campaign, battling Urasoe to a scoreless tie. The Dragons knotted Kadena 0-0 in last year&#8217;s season opener.

&#8220;We stepped up late in the game,&#8221; first-year coach Tom McKinney said, adding that the Panthers need to &#8220;work more on passing, learing the basics of staying outside and not bunching up the middle.&#8221;

Saturday&#8217;s meet attracted about 150 entrants, 140 of whom were high school students and just 10 adults, something on which meet organizer and Kubasaki coach Charles Burns hopes to improve by staging another All-Comers&#8217; meet in May.

Zama girls get over defeat, earn soccer split vs. EdgrenZama American&#8217;s girls team could have been forgiven for dwelling on Friday&#8217;s heartbreaking last-minute loss to Edgren in the first of two DODDS-Japan Soccer League matches.

Instead, the Trojans used the defeat as a motivator. Freshmen Aubrey Ashliman and Whitney McWherter scored two goals apiece as Zama earned a split by winning 5-3 Saturday after falling to the Eagles 3-2 on Friday.

Youth served the Trojans well throughout the weekend, as freshmen and sophomores were chiefly responsible for their scoring.

Sophomore Maia Miller and freshman Anna Park put the Trojans up 2-0 in the first half on Friday, and Zama led through the first 55 minutes ... until the lights went out at Trojans Field, causing a 15-minute delay.

Afterward, Edgren answered with goals by Amber Kers, Mia Angelella and, with two minutes left, the winner by Alyssa Rodriguez.

Zama left little to chance Saturday, leading throughout on goals from McWherter and Ashliman goals and a tally by sophomore Rachel Ravelo. Rodriguez and Chelsey Melillo scored for Edgren.

Little and Edgren coach Larry Allen said their squads have plenty to work on.

Moving Massey to forward helps Eagles boys soarNew Edgren boys coach Jose Pumarjo first planned to put Brandon Massey at midfield, but prior to the weekend&#8217;s DODDS-JSL matches at Matthew C. Perry, he decided to move him up front and put veteran Nathan Fine at center-midfield.

The move paid immediate dividends &#8212; Massey scored nine goals in three matches as the Eagles soared to a three-match sweep, 7-0 and 4-0 over Perry and 3-1 over E.J. King at Iwakuni Marine Corps Air Station.

&#8220;I was not expecting us to do this well. I was scared,&#8221; Patterson said after the Falcons tied Osan American 1-1, giving them a 1-1-1 record after three matches. Patterson cited having just over a week of practice and still deciding on player positioning as reasons to worry.

&#8220;It gets him more involved with the ball,&#8221; Patterson said of something that Burns is used to as a basketball point guard and football quarterback. &#8220;He asked me to try him there, see how things go and I gave him 15 minutes and he did extraordinarily.&#8221;