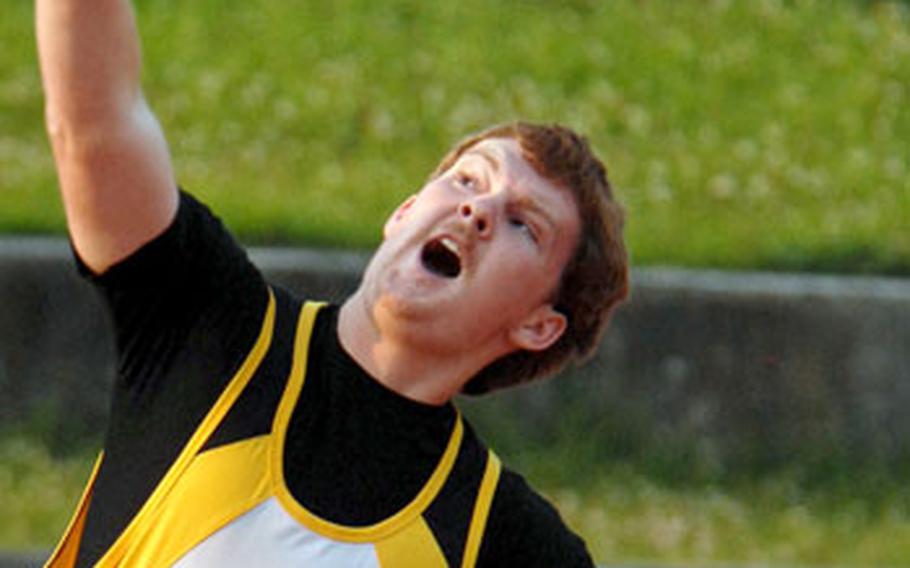 Junior Roman Harris of the Kadena Panthers throws the shot. Harris won the event with a throw of 11.44 meters, or 37 feet, 6½ inches. (Dave Ornauer / S&S)

Whether as part of Kadena&#8217;s 400-meter relay teams or as 100-meter sprinters, Shun Bowens and Lorien McKinney showed they felt the need for speed Friday.

Bowens, a senior, and McKinney, a junior, ran personal bests in the 100 and anchored the Panthers&#8217; relay squads to meet records in the Okinawa Activities Council district track and field championship.

One caught a hint, perhaps, that the 400 relay records were going to tumble after Bowens rallied to catch Kubasaki&#8217;s Marquette Warren halfway through the 100, edging him 10.98 to 11.09 seconds.

Warren took about a meter&#8217;s lead from the start and appeared to have the race in hand, until Bowens flagged him at the 60-meter mark.

&#8220;It feels special,&#8221; McKinney said of being the fastest high school female on the island. But the junior feels she can do better.

But she wasn&#8217;t done for the evening. Running anchor, she helped Kadena complete a rewrite of the 400 relay record book, clocking a 51.90. That edged the old record set last year by Kadena by .08 seconds.

All that highlighted an OAC district meet held for the first time in an off-base venue.

Meanwhile, the boys season series will come down to a final contest on May 9 at Mike Petty Stadium. Kubasaki edged Kadena 2-1, tying the season series 2-2 with the goal margin dead even as well.

Jon-Jon Green and John Bogen each scored twice as defending Boys Class A Tournament titlist E.J. King came back from a 2-1 halftime deficit to edge Nile C. Kinnick 5-3 at Sasebo Naval Base.

On the diamond at Daegu&#8217;s Civic Stadium, Seoul American&#8217;s Tristan Heckerl outlasted Daegu American&#8217;s Nick Dunsmore, striking out 17 to Dunsmore&#8217;s 14 as the Falcons edged the Warriors 7-6 and took a two-game lead in the DODDS-Korea standings.