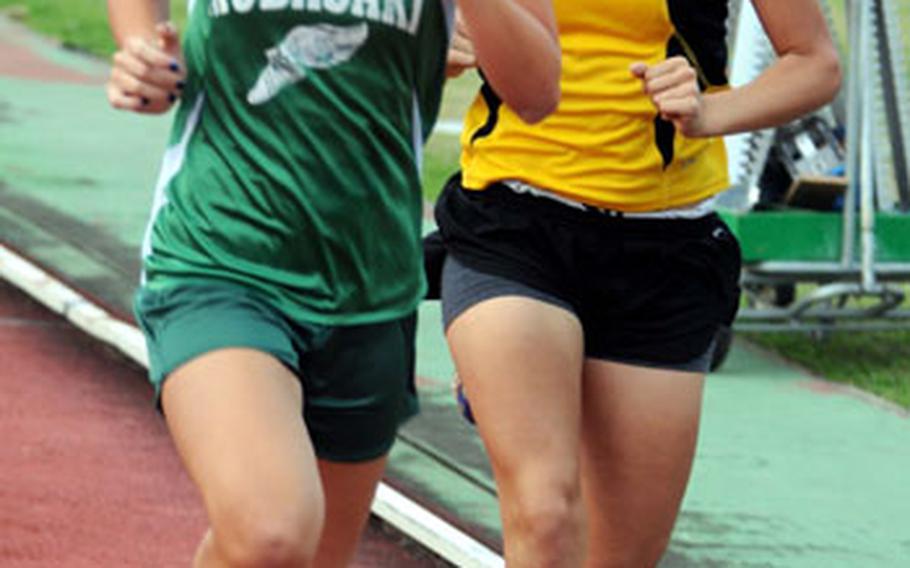 "He&#8217;s built like a miler. It looked like he was warming up for a sprint or something. He looks like he might give his old teammate some competition" in next month&#8217;s Mike Petty Memorial Meet, Kubasaki coach Charles Burns said of Bishop&#8217;s former Zama teammate Andrew Quallio.

Powell, who calls swimming her signature sport, was timed in the two-mile in 13:07 and the mile in 6 minutes.

While those new faces stepped up to claim early season distance bragging rights, some of the usual suspects resurfaced and reignited rivalries, some of which have spanned two seasons.

"They&#8217;re really strong and competitive, which drives me to be faster," said Harris, adding he hopes to run as fast as 10.8 this season. "I was a little nervous. I&#8217;m always nervous before a race. We&#8217;ve been practicing with blocks all week. I credit that to the coaches."

For this point in the season, the times and distances seemed ahead of normal pace. "Southern style," Burns said. "That&#8217;s what you get when you have good weather."

On the girls&#8217; side, aside from Powell, multiple winners abounded.

After the Trojans had won their first four matches and outscored opponents 31-2, the Eagles came to Naval Air Facility Atsugi and held Zama to one tally in a 1-1 tie at Reid Memorial Stadium.

"Our goalkeeping was fabulous and our defense was marking in the box well," Eagles coach Mark Pierce said. "It was a team effort. We were pleased. Not having any practice time on a soccer field. They&#8217;re gutsy kids. They just didn&#8217;t give up."