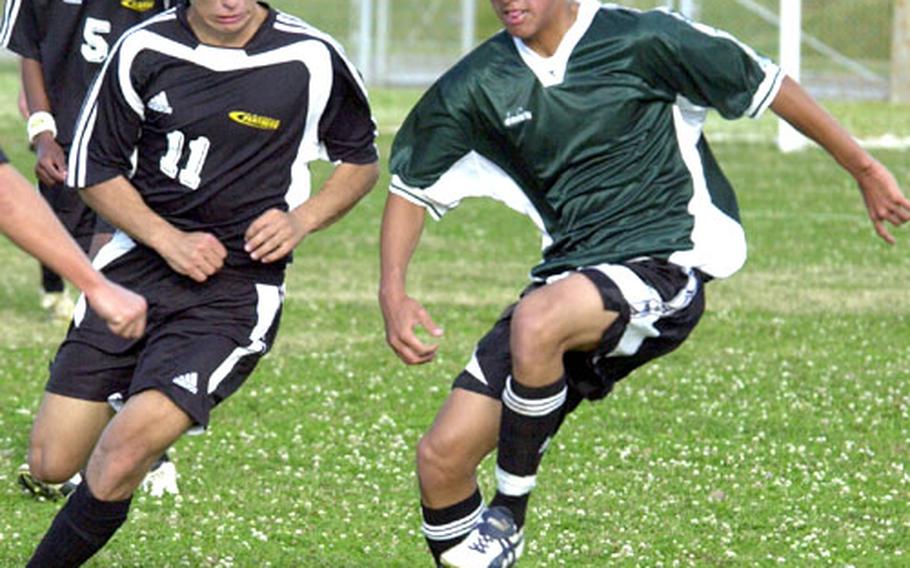 Brenden Stanford (11) of the Kadena Panthers and Daniel Ihu of the Kubasaki Dragons battle for the ball during Thursday&#39;s soccer match at Camp Foster, Okinawa. The two-time Class AA champion Panthers shut out the Dragons 3-0. (Dave Ornauer / S&S)

Brenden Stanford (11) of the Kadena Panthers and Daniel Ihu of the Kubasaki Dragons battle for the ball during Thursday&#39;s soccer match at Camp Foster, Okinawa. The two-time Class AA champion Panthers shut out the Dragons 3-0. (Dave Ornauer / S&S) 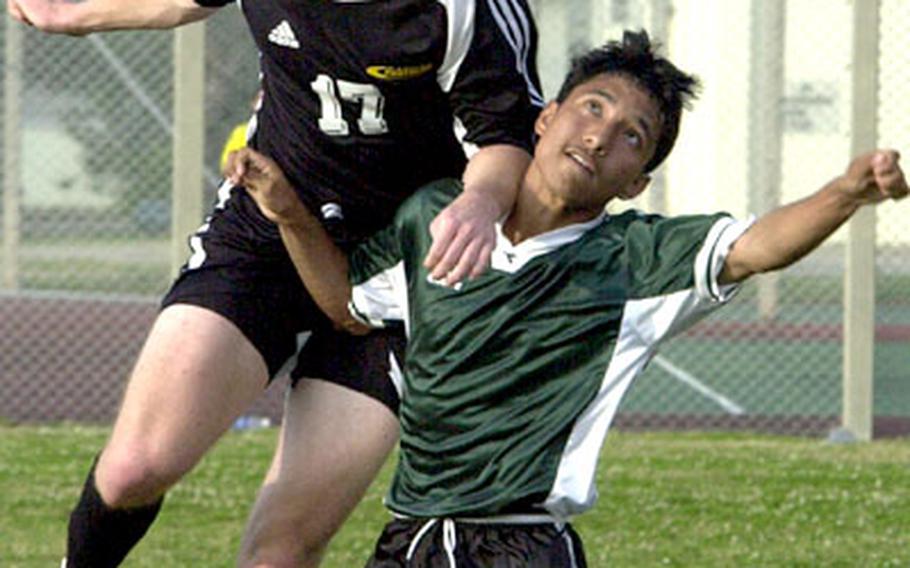 (Game summaries at end of story)

CAMP FOSTER, Okinawa &#8212; Kadena goalkeeper Ted Awana&#8217;s play gave no indication that Thursday&#8217;s match against Kubasaki was his first of the season.

Awana got at least a finger on every shot the Dragons sent his way and recorded a shutout by making nine saves, many of them spectacular, in his season debut after recovering from a shoulder injury.

&#8220;He has incredible reflexes, good positioning and good goalkeeper sense,&#8221; said Kadena coach Mike Callahan after the Panthers improved to 4-0 after their first match since March 23.

The girls teams also played a rematch of last year&#8217;s Far East final on Thursday, and Kubasaki recorded its first win over Kadena since the 2003 season, 4-1.

Both matches were played at Kubasaki&#8217;s upper field.

Ben Zendejas converted a rebound of an Anthony Soroka shot in the ninth minute, but the Panthers seemed punchless the rest of the half.

In the 48th minute, Aaron Zendejas angled a corner kick into the net over Kubasaki goalkeeper David Motu. Then Copeland iced it by heading in a cross pass from Brenden Stanford.

Emily Short converted Erin Foote&#8217;s corner kicks in the seventh and ninth minutes, and Kimi Cece threaded a direct kick through Kadena goalkeeper Liz Cotto&#8217;s hands in the 14th. Levinia Tyrrell tapped in a direct kick by Cece to cap Kubasaki&#8217;s scoring in the 27th minute.

The Pacific&#8217;s leading goal scorer last season, Dianne Abel, scored her fifth and sixth goals this season but it wasn&#8217;t enough for the Panthers.

&#8220;Scoring early in the first half and having a substantial lead played a big part in our success,&#8221; coach Terry Chumley said.

It was Kadena&#8217;s first loss in 24 matches dating back to the 2003 Far East tournament. The Panthers went 21-0 last season. Kubasaki had lost five straight matches to Kadena.

In the closest game between the teams in three seasons, the Panthers managed a rare victory over the Dragons. Stacey Ware went six innings, giving up three hits and striking out five. Lindsey Davis issued two walks in the seventh but got the last three outs for the save. Samantha Fox had two hits and scored twice for Kadena.