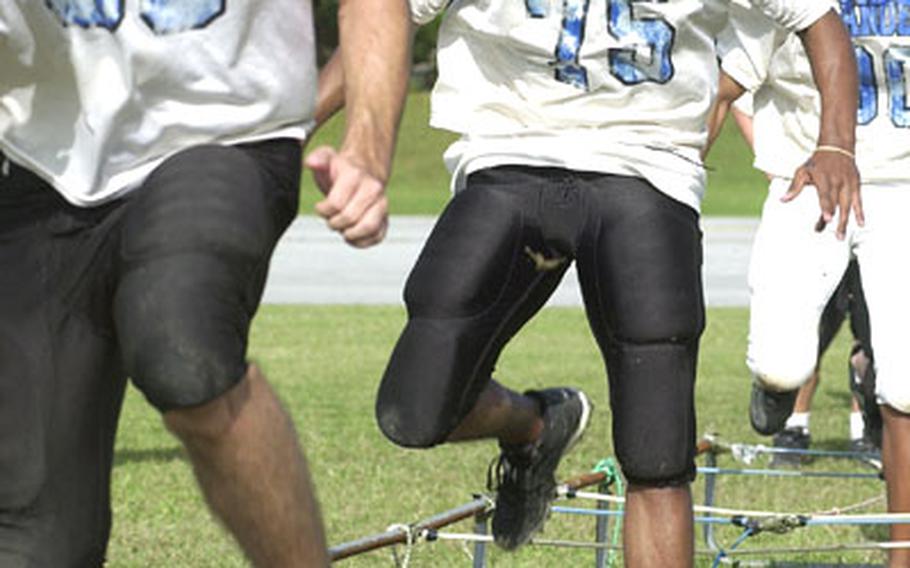 Even with Friday&#8217;s games remaining in the regular season and the island playoffs still a week away, in some coaches&#8217; minds the Okinawa Activities Council football postseason already has begun.

So why does Islanders coach Sergio Mendoza view this as a dangerous time?

Led by senior running backs Keith Loving and David McCowan, his Islanders have bulldozed their way to a 5-0 mark.

Letting up even a little, he said, can destroy everything for which they have worked.

Such a distraction would be very similar to what the Islanders experienced last year, when they also opened 5-0, but lost two of their last three.

Meanwhile the Shogun, winless thus far, enter this weekend and the playoffs with a &#8220;nothing-to-lose&#8221; mind-set.

Friday&#8217;s game with the Buccaneers &#8220;could be a stepping-stone&#8221; toward the Shogun becoming a playoff spoiler and be a confidence builder, coach Charles Burns said.

For the Buccaneers, a victory Friday and a Samurai loss to the Islanders would give coach Brian Wetherington&#8217;s team the No. 2 playoff seed and a &#8220;psychological edge.&#8221;

The Top Ten teams in the Stars and Stripes’ 2004 Far East high school football ratings, with records through Oct. 12, points and last week’s rating, as compiled by Dave Ornauer of Stars and Stripes sports. Ratings are based primarily on teams’ win-loss records, quality of wins, strength of overall roster, point differential, team and individual statistics, strength of schedule and strength of leagues. Maximum rating is 500 points: