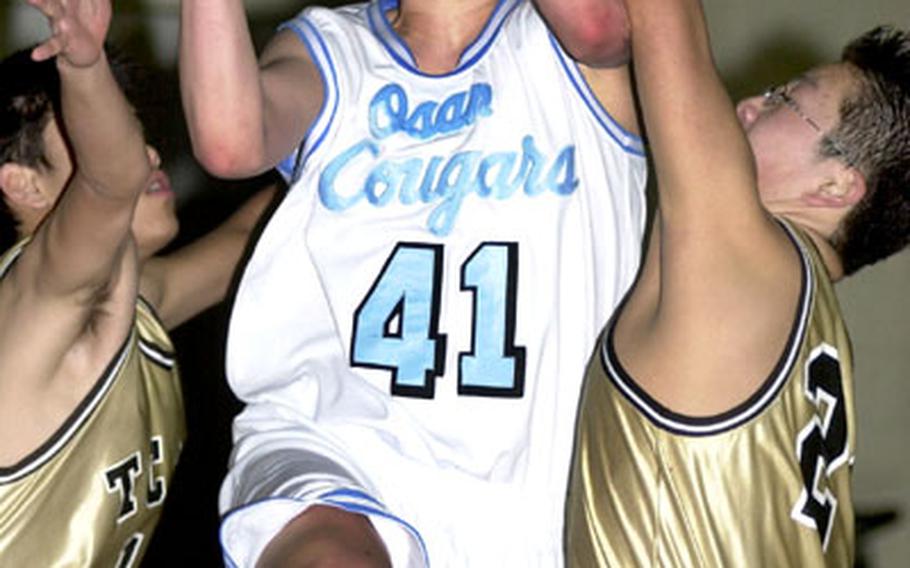 OSAN AIR BASE, South Korea &#8212; If it were a college course, you could call it Basketball Hard Knocks 101.

The Osan American Cougars took their lumps during the opening three days of the Osan Pacificwide Invitational Basketball Tournament, the first time in the event&#8217;s 16-year history that it&#8217;s welcomed high school teams.

The Cougars lost their first four round-robin games by an average of 37 points and had to forfeit the fifth on Wednesday morning as most of the players couldn&#8217;t be released from school commitments.

After playing in the base&#8217;s spacious new sports and fitness center most of the week, Osan was happy to be back home and in a familiar environment, the team&#8217;s tiny Cougar Palace. The Dragons were smaller, less physical and a step slower than their military counterparts.

Ten days ago, TCIS hung tough in a 50-30 loss to Osan. But the Cougars raced to a 21-6 lead on Wednesday and never looked back as Scott scored 16 points.

The invitational&#8217;s hard knocks will also pay off, Scott said, in future battles against larger schools such as Seoul American, which has beaten Osan American four times, and Seoul Foreign, which edged the Cougars 63-60 a week ago on a last-second shot.