On court, on mat, teams from Germany and Italy evenly matched 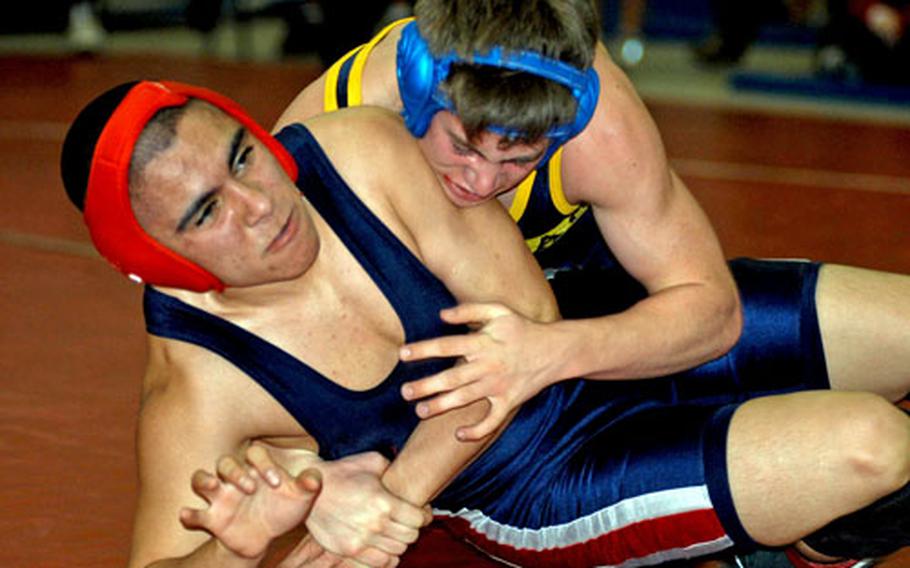 Aviano&#39;s Pablo Martinez tries to escape from Ansbach&#39;s John Swanson during their 125-pound match Saturday at the regional qualifying tournament at Aviano. Swanson held on for a 5-0 win and a berth at the European championships. (Kent Harris / S&S)

AVIANO AIR BASE, Italy &#8212; The rare weekend matchup between DODDS schools from Italy and Germany south of the Alps ended up pretty even.

On Saturday, Ansbach and W&#252;rzburg combined to send 12 wrestlers to the European championships, with five of them winning championships in the Section I Tournament.

The top two wrestlers from the tournament qualified for the finals, but it&#8217;s possible that more may make it if they&#8217;re selected as wild-card entrants.

Each of the four girls teams ended with a win and a loss. Naples and Aviano won Friday, but Vilseck and Patch came back with victories on Saturday.

Patch had as easy a time with Aviano, winning 40-27 behind 15 points and 19 rebounds from Nicole Anderson.

Aviano had defeated Vilseck on Friday, 35-24 behind 15 points from Kassie Mangosing.

Behind 16 points from Willmer and 11 each from Renna Damon and Michelle Aguila, Naples defeated Patch 41-37 on Friday night. The Wildcats led 24-12 at the half before Patch, led by Anderson&#8217;s 16 points, mounted a comeback.

In four games that were fairly similar, Aviano and Naples pulled away late to sweep the weekend series.

On Friday, Miller had 21 points to lead Aviano to a 73-66 victory over Vilseck. The Saints got off to a slow start before sophomore Spencer Templeton provided a spark off the bench and finished with a career-high 20 points.